Triplet Names For Pets: 125+ Name Trios for Your Dogs!

Are you expecting a terrific trio at home?

Whether you’re bringing in a group of new best buddies or simply want to find fitting names for your existing gaggle of furry friends, there are plenty of name sets that might make the perfect inspiration for your canine crowd!

Below, we’ll share some of the best triplet names for pets so that you can find fitting names for your furry friends. We’ll include some of the most famous threesomes from literature, movies, and pop culture, as well as some names other owners have used for their four-footed trios.

We’ll start by sharing some of the most famous dog names for pupper trios. Be sure to let us know any we missed in the comments!

Not sold on any of the famous triplet names listed above? No problemo! Check out some of these thrice-as-nice names some other owners have used. Some of these are references to popular threesomes, but others were picked because they were alliterative or owners just liked the way they sounded.

We’ve split these names into male, female, and gender-neutral groups, but you could obviously mix and match ‘em to suit your pack!

Do you have a group of boisterous boys at home? Here are some male dog names for triplets other owners have used.

Are your canine cuties a triple threat? Here are some female dog names for canine trios that some other owners have used for their pooches.

Whether you have all guys, gals, or a mixture of the two, these gender-neutral triplet names other owners have used are worth considering for your dog squad.

As you can see, there are plenty of terrific triplet names to choose from! Hopefully, one of these name sets is the perfect fit for your family of furry friends.

Do you have a trio at home? Which triplet names were your favorite? Tell us all about it in the comments below! 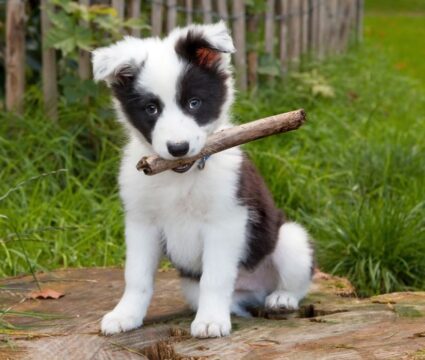 400+ One Syllable Dog Names: Short And Sweet Names For Your Furry Friend