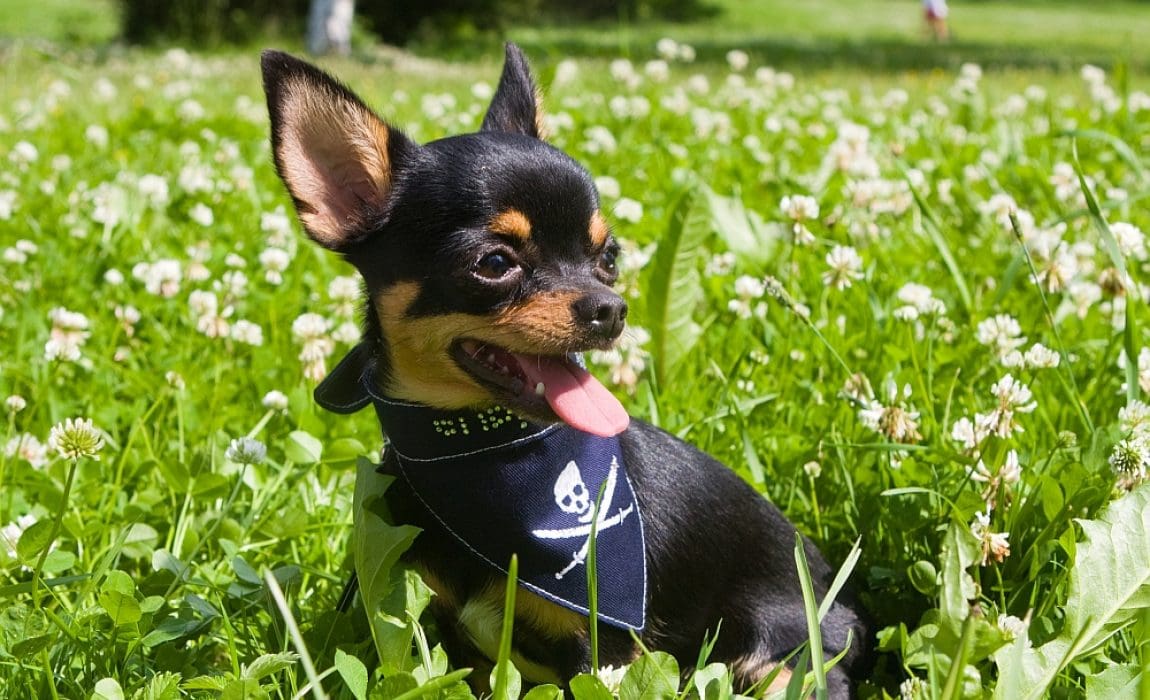 Chihuahuas are fantastically popular dogs that are available in several different flavors, including nine different colors, six different patterns and both long- and short-haired varieties. But there is one more way in which Chihuahuas vary – the shape of their heads!

Many owners are unaware of this fact, so be sure to keep reading. We’ll explain how to tell the difference between the two, as well as provide guidance so you can select the best one for you.

It’s usually pretty easy to distinguish the two, but if you are having trouble, look at the place where your Chihuahua’s muzzle meets his face from the side. Apple head versions will have a roughly 90-degree angle at this point, while the same part of a deer head Chihuahua will be about 45 degrees.

Simply put, the apple head Chihuahuas feature a face that is essentially vertical, the faces of deer head Chihuahuas are sloped. Additionally, the forehead of apple-shaped chihuahuas is much more prominent than those of deer-headed individuals.

In the photo of the apple headed Chihuahua below, note the:

The large eyes and small, rounded head makes the apple headed Chihuahua appear physically reminiscent to a human baby – which is one reason why we humans find these Chihuahuas so darn cute! 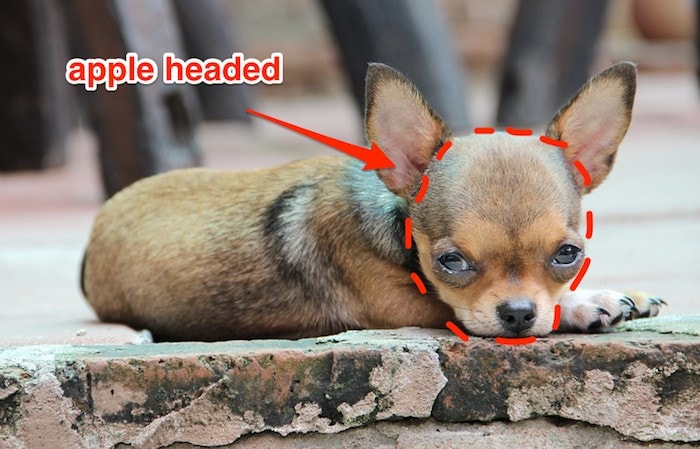 In the photo of the deer headed Chihuahua below, note the: 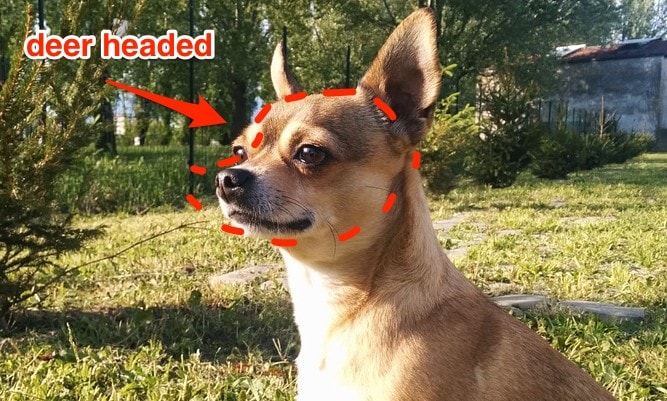 Apple-Headed Chihuahuas Are the Breed Standard

Technically, to conform to the AKC breed standard, Chihuahuas must have “apple-shaped heads.” So, if you are interested in showing your dog, it is important to look for an apple head variety. However, there is certainly nothing wrong with deer head Chihuahuas, and a few have even become famous.

Additionally, as long as both of your Chihuahua’s parents were AKC-registered, you can register your Chihuahua, no matter what shape his head is. There is always the possibility that the AKC (and other registration clubs) will start recognizing two separate varieties, but only time will tell. This is a contentious subject among those who work with the breed.

Which Came First? The Apple or the Deer?

Nobody knows exactly why or how Chihuahuas began producing differently shaped heads. In general, the breed’s history is somewhat complex and unclear.

Some sources report that remains of Chihuahuas that lived thousands of years ago, representing both varieties have been collected. This complicates the situation and makes it likely we’ll never know exactly which skull shape came first.

Interestingly, apple head Chihuahuas occasionally appear in litters produced by two deer heads, and vice versa. However, this doesn’t appear to occur in any sort of predictable pattern – you never know when you’ll get a surprise! 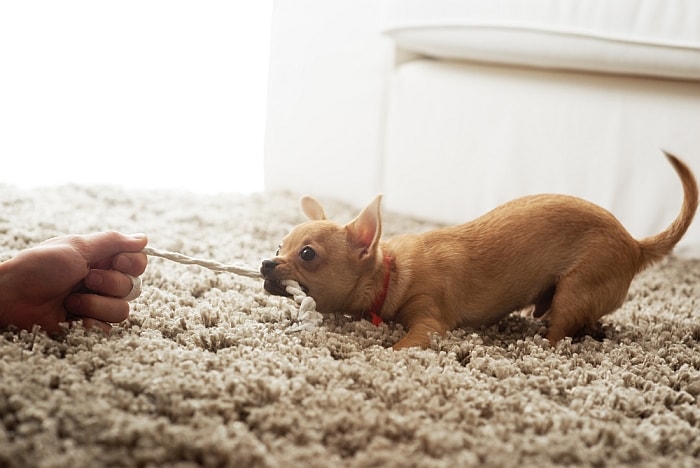 What Else Is Different About Deer Head and Apple Head Chihuahuas?

Aside from head shape, the two different kinds of Chihuahua exhibit several other differences. Some of the most noteworthy differences include:

Most apple head varieties have a soft spot on their skull at birth (termed a molera), this is less common with deer head varieties.

Deer head Chihuahuas usually have longer heads, necks and legs than their apple head counterparts do.

The eyes of apple head Chihuahuas typically appear more pronounced, given the shape of their heads.

While still basically similar in size, deer-head Chihuahuas are often slightly larger than the other variety.

Some who are familiar with the breed consider deer head Chihuahuas to be the more relaxed of the two.

Most Chihuahua authorities believe that the deer-headed variety is less susceptible to health problems than their apple-headed counterparts.

Are There Any Benefits of Buying One or the Other?

For the most part, you should feel free to select whichever type of Chihuahua you like best. If you think that apple head versions are too cute for words, then go ahead and add one to your family; but if you’d prefer a deer-headed doll, go with the that version.

However, there are a few important considerations to keep in mind when making your choice. For example, if you dream of dog shows and blue ribbons, you’ll be forced to select an apple head Chihuahua. Conversely, if you don’t have any aspirations for the show ring, deer head Chihuahuas may be the better choice (assuming you prefer their look or other traits). 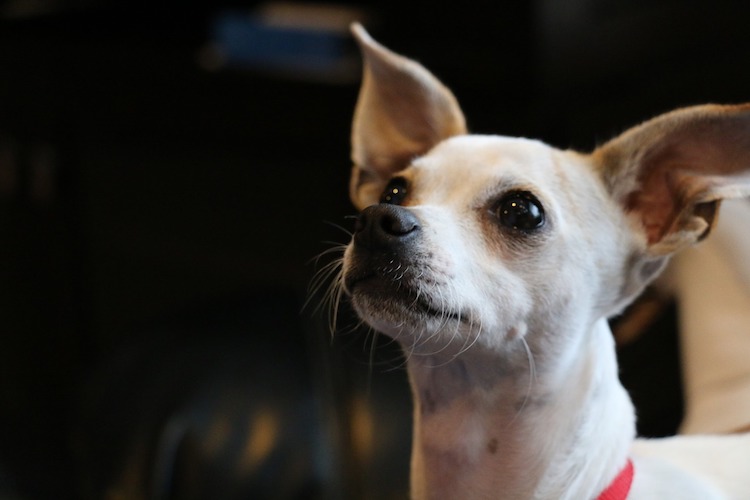 Most Chihuahuas generally favor one type or the other; however, a small percentage of these spunky little pooches feature a mixture of the traits common to both varieties. So far, nobody is exactly sure why this happens, and you never know when such an unusual individual will pop up in a litter.

What say you, good readers? Do you prefer one style of Chihuahua to the other? What kinds of differences have you noticed between the two varieties?

We’d also love to take the pulse of the Chihuahua community and find out if there is much of an appetite for a change in the AKC’s standards. Do you think they should continue to recognize only one type of Chihuahua, or should they split the breed into apple- and deer-headed varieties?

Let us know your thoughts below, and be sure to check out our other articles focusing on Chihuahuas: 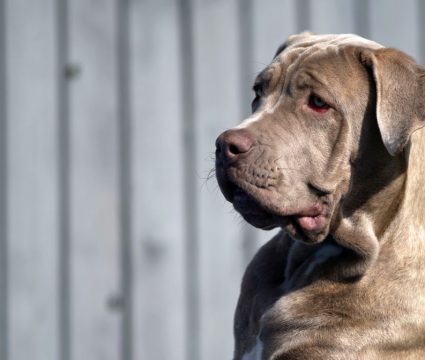 The Daniff: A Gentle Giant With Heart

I can only think of how much more difficult the birth of the apple head must be for poor mum! Also, they probably have much more breathing problems than the deer heads.

We have a beautiful 6 year old deer head female and wouldn’t trade her for the world! The AKC should allow both types and also loosen up on the size limitations as the apple head variety tends to be smaller.

I have 2 deer-heads from the same litter (brother & sister). They’re 3yrs old, the girl is almost 9lbs and the boy is about 6lbs, (he was the runt)- both are very lean. They love (almost) everyone and are very sweet and cuddly! Their personalities are hilarious and keep us laughing! Best little dogs I’ve ever experienced!

I bought an apple head 6 years ago and she is built more like a description of a deer head. She is broader and sturdier looking than the “typical” Chihuahua. She has had 2 litters in her 6 years. The first litter she had a girl and she is apple head, the “perfect weight” but maybe a little tall for a standard Chihuahua. This last litter there were 4. Of the 4 one is the tiny apple headed, petite build, yippy bark, and the works of what everyone thinks of when they think Chihuahua. The other 3 are bigger and sturdier like mom (the 6 yr old) but only 1 has a deer head. Honestly, he looks like a Corgi more than a Chihuahua, but he is all Chihuahua. Positive. He is a hefty guy that is easily out growing him mom and he’s not quite 6 months old yet. It amazes me the differences in the breed that I’ve noticed just from my single female. Oh, I know they are pure Chihuahua puppies because my in-laws tiny male Chihuahua is the papa. My female is about 8-81/2 lbs and he’s 2lbs. Full grown their first daughter is 4 and weighs 4lbs.

Ive adopted one and they said she was part chi and part min pin. She has really long legs so I’m curious if that goes with the deer head or the min pin. And any advice y’all can share would be greatly appreciated.

Unfortunately I think there are small mongrels who can have a Chihauhua ‘look’, or maybe being very small is enough for some people to just assume that they are Chihuahuas! These sweet dogs have deer type skulls. The Apple head (for better or worse) does not look like a mongrel, having the distinctive stop and high forehead, short nose skull. This creates a bit of a stigma for the dear deer head Chihuahua!
I am guessing the extreme apple head would have many more health problems than the deer.The Apple head however does have that baby face appeal that is hard to resist and is a definite Chihuahua look, that I for one, can’t resist.
Thank heavens we don’t all love just one look!

Just goes to show – different strokes for different folks! I actually prefer the look of deer-headed Chihuahuas myself.

I have a chi that exhibits both apple and deer so he’s a Dapple. ❤️