Help! My Dog Ate Weed! Is He Going to Get Crazy High? 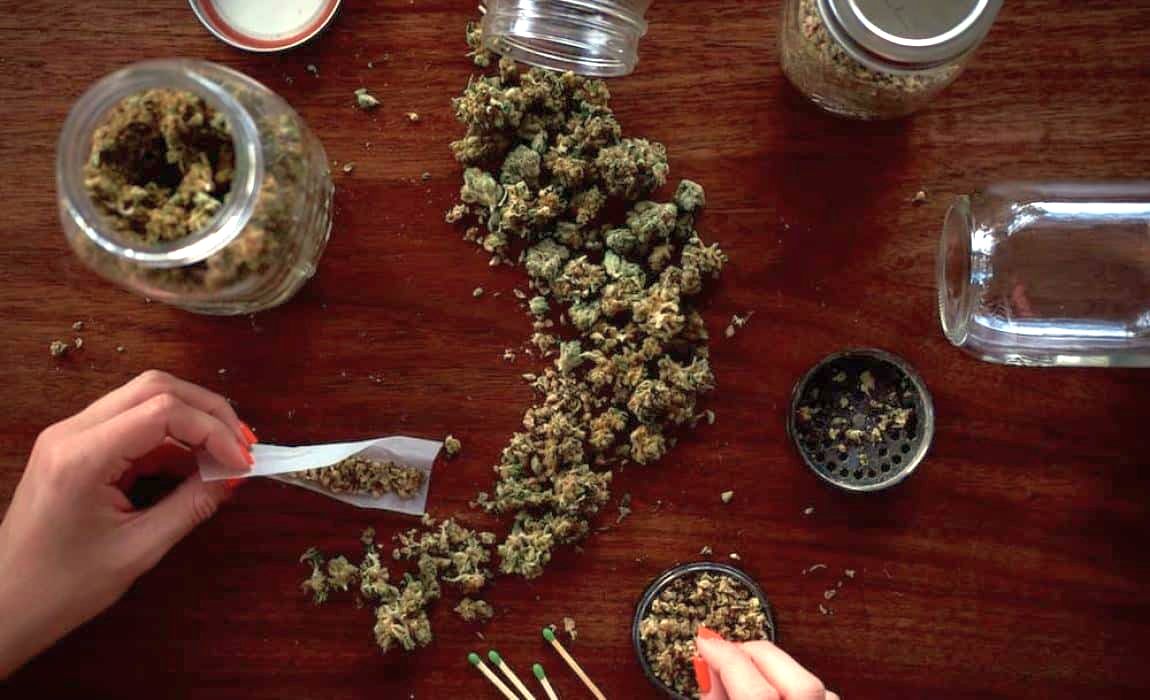 Discovering that your shih tzu ate your stash is an instant buzz kill.

One minute, you’re lost in your favorite song and trying to figure out if Goofy was actually a dog, and the next, you’re looking at a sandwich bag that’s been ripped to shreds and a twitchy dog who is clearly worried that you can hear his thoughts.

Your dog will probably be okay, but marijuana ingestion can be a serious issue for canines.

It will generally make your dog feel pretty terrible, and you will need to head over to the vet (take an Uber or get a friend to drive you if you’ve recently indulged). You or your vet may also want to put in a call to the animal poison control center for some additional guidance.

Key Takeaways: My Dog Ate Weed! Is He Going to Be OK?

Despite being largely considered safe for people, marijuana is toxic to dogs. This includes raw cannabis plants and dried cannabis, as well as BHO, wax, edibles, and any other cannabis product containing a significant amount of THC.

For the unfamiliar, tetrahydrocannabinol – THC – is the primary cannabinoid (active ingredient) in marijuana. It’s the chemical responsible for triggering the psychoactive effects of weed.

You probably have a pretty favorable opinion of THC (and recreational marijuana in general), but your pup’s opinion would likely differ. In fact, THC often triggers a number of troubling symptoms in dogs. This is part of the reason why medical marijuana for dogs isn’t very popular.

Some of the most common include:

It is also important to understand that while THC will only affect you for a few hours, the signs of THC toxicity can last for many hours in dogs. And in some cases, it may take a day or two for the symptoms to completely wear off.

Note that not all of the cannabinoids found in pot are harmful to pets. Cannabidiol (CBD), for example, is a cannabinoid that is responsible for many of the health benefits weed is thought to provide.

CBD doesn’t produce any psychoactive effects, and many people deliberately give CBD extracts to their dogs to address things like arthritis and epilepsy.

Is Weed Fatal for Dogs?

THC is thought to affect the cortex of the human brain (the part that is responsible for interpreting external stimuli, among other things), but not the brain stem (which is essentially responsible for keeping you alive).

This led doctors and vets to assume that it shouldn’t be fatal — even in high doses.

There was also a mountain of anecdotal evidence that suggested the same. After all, there weren’t any records of people or dogs dying from a THC overdose.

But in recent years, a few troubling reports have shown that this assumption may be incorrect.

At least one person’s death has been associated with marijuana ingestion (although the doctors are careful to state that a cause-and-effect relationship was not established). Additionally, a 2012 study included a reference to two dogs who died after eating THC butter.

So, death is clearly a possibility for dogs who eat a significant amount of THC. However, the chances of this happening are pretty slim. As explained by veterinarian Eric Barchas:

So, while death is clearly possible from marijuana ingestion, it is a relatively unlikely result, especially if you get over to the emergency vet quickly.

Good pet parents have everything on hand to care for their pet in an emergency. And when we’re talking about cannabis ingestion in dogs, that means having the Animal Poison Control Hotline number at the ready: (888) 426-4435.

You’ll still want to contact your vet if your dog eats weed, but make sure this number is stored in your phone or taped to your fridge.

When you get to the vet, the staff will take your dog back to the exam room, take a history (How much weed did your dog eat? How long ago did he eat it?) and check your pup’s vitals.

There isn’t a specific treatment or antidote for THC poisoning, so most of the treatment provided will be supportive in nature.

If your dog ate the weed within the last half hour or so, the vet may induce vomiting to prevent his body from absorbing any more THC than it already has. He or she may also administer activated charcoal, which will help neutralize some of the THC present.

The vet will also likely set up an IV line to administer fluid therapy and treat any other problems symptomatically. Many vets will want to keep your dog for observation for 12 to 24 hours.

If marijuana ingestion is suspected, but you can’t (or won’t) confirm that your dog ate some kind bud, your vet may use a urine test kit to figure things out. They don’t (yet) make urine test kits for dogs that are capable of detecting THC (technically, the metabolites of THC), so urine tests designed for humans are typically used.

However, human tests don’t always work well for dogs, and they frequently produce false positives or false negatives. So, your vet may need to use his or her best judgment when deciding on a treatment plan.

Once your vet is satisfied that your dog is stable and likely to recover, your dog will be released to go back home with you.

Will My Vet Report Me to the Cops?

You’ll likely be arrested upon arriving at the vet, so be sure to bring bail money when you bring your dog in for treatment.

While it’s possible that a vet with a stick up his or her butt would contact the local authorities, few will be inclined to do so.

The vast majority of vets will only care about taking care of your dog and helping him feel better. You may get a bit of a (well-deserved) lecture regarding the safe storage of weed, but you’re unlikely to end up in handcuffs.

As explained by veterinarian Robert Proietto:

“It is also important to tell the veterinarian the truth. No veterinarian is going to judge their client for being honest and we will never contact the police. We just want to know what is going on so we can treat the pet to the best of our ability.”

Just be honest with your vet so your poor pooch can get the treatment he needs.

If your dog is only experiencing mild symptoms, your vet may end up sending you home with your dog before the effects of the THC have completely worn off.

Obviously, you’ll want to follow any discharge instructions provided by your vet, but you’ll also want to do whatever you can to help your dog cope while he sobers up. This primarily means keeping him calm and ensuring that he feels safe.

Some things you may want to try include:

Stop Leaving Your Weed in Places Your Dog Can Access

Once your dog is on the path to recovery, it is important to do everything you can to prevent the problem from happening again in the future.

Among other things, this means adopting the following practices:

Dogs often have a rough time after eating weed, and they’ll usually need veterinary attention to help ensure they don’t suffer from any serious problems. But fortunately, most will recover with prompt treatment.

Do you have a dog-ate-your-weed story you’d like to share? We’d love to hear it. Tell us all about the experience in the comments below!

I have a “friend” who once went through quite an ordeal when the family dog ate about 8 grams. Everything turned out alright for the dog – she was nervous for a while but then just went to sleep — but it taught me him to be more careful about storing his herb in the future. 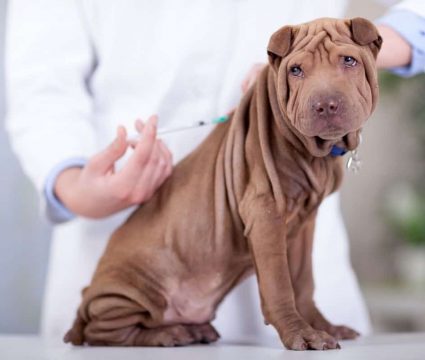 When Can Puppies Get Shots? Puppy Vaccination Schedules

My Dumb friend left THC wax on the coffee table 3 grams of it and my dog ate it and died 5 days later. The wax held together and blocked up his system and he couldn’t hold down food or water, kidneys failed it was all bad.

Oh no, Steve! That is absolutely terrible, and we’re so sorry to hear it.
Thanks for sharing this cautionary tale with everyone.

June 5, 2021 to my 42lb wheaten terrier mix to the dog park. Appx. 5hrs later found him lethargic, balance off, and flinching when trying to touch his face. Rushed him to vet hospital. He began to have incontinence. Tech said he probably ingested THC. Felt like I was thrown into the Twilight Zone. Totally shocked thinking this tech is nuts. Well, she wasn’t. Initial test came back positive! Doc said that they are seeing this a lot now since it is legal and people are throwing their roaches, ashes everywhere or not carefully storing it safetly in their homes and dogs will eat it. He is fine now and didn’t need any IV’s. Doc said it wasn’t a lot since the final end test showed negative. Please, please think of these innocent animals and NEVER just toss ashes, roaches, anywhere especially in a dog park!! This was a very scary experience watching a beloved animal go through this type of suffering.

Hey there, BL.
Sorry to hear about your pooch’s ordeal, but we’re glad he’s OK now.
And you bring up a very good point about disposing of THC-containing substances. Not only is it a safety issue, but littering is just lame in general.
Thanks for sharing your story!

My 18 pound winner dog ate a gram of alien cookie wax it’s day two and all he wants to do is either lay in my bed or in the sun when I bring him out side I’m hoping a another day and he will be back to normal. I’m a good pet parent he has shown no signs of distress so that is why no vet visit yet.

We’d still recommend checking in with your vet to be safe, but we’re glad he’s doing OK.

I’m guessing you’re kidding, Assholey.
But in case anyone else reading is unclear: Do not give your dog edibles.

Hey, Justin.
I’m guessing you’re commenting on the wrong article, as we don’t that owners force vomiting or use a syringe anywhere above.
Kind of funny, given the topic.
🙂