Why Do Dogs Sneeze? 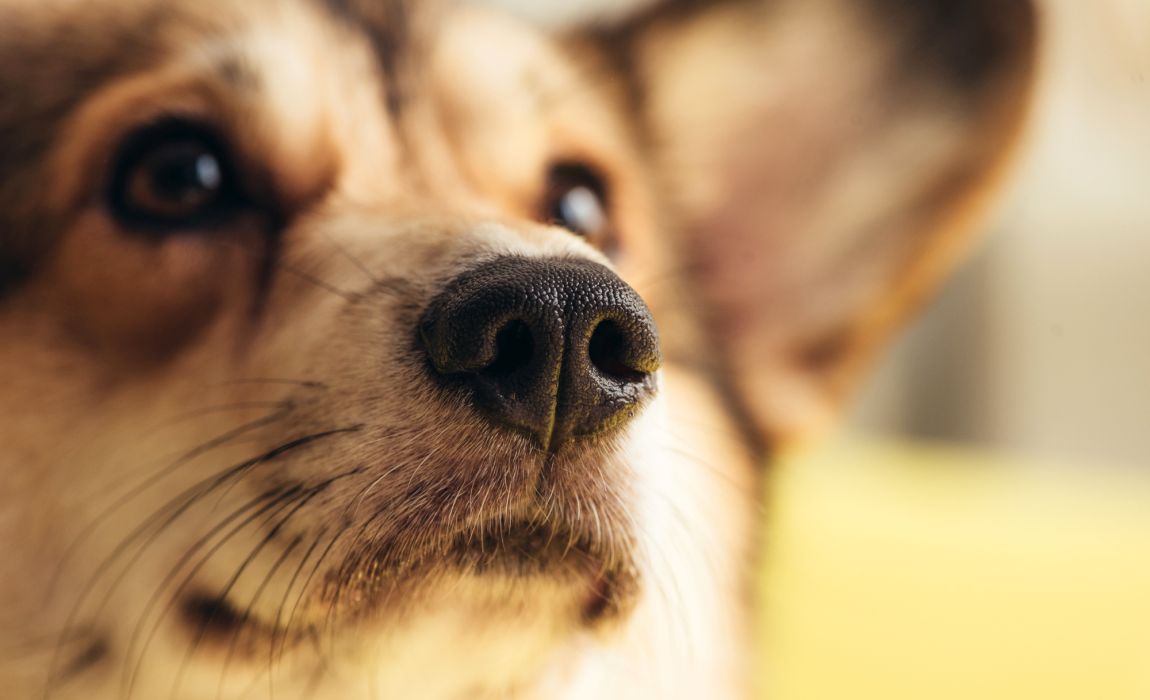 If you’re new to dogs, you may be a bit surprised the first time you see your dog sneeze.

It’s often pretty cute (at least, I think so), and most dogs “get their money’s worth” out of a sneeze. They don’t try to stifle sneezes the way humans do – they just let ‘em rip.

But dog sneezes really shouldn’t be that shocking — sneezing is a common biological phenomenon that occurs in many different types of animals. But some dogs sneeze relatively frequently, which can cause owners to wonder if it is a problem.

We’ll dive into canine sneezes more below, explain why they happen, and tell you when you need to worry about them. We’ll also try to explain the horrifying “reverse sneeze” phenomenon that occurs from time to time.

Why Do Dogs Sneeze?

There are a few different reasons dogs sneeze, but a few of the most common causes include:

Sometimes, dogs sneeze for the very same reason people do: Something gets up their nose and causes a tickling sensation. This triggers a sneeze. The offending irritant may be just about anything, but pollen, dust, smoke, and animal hair are some of the most common offenders.

Dogs who end up with bacteria, viruses or fungi in their snoot can end up suffering from a nasal infection.

Nasal infections can cause mucus to build up in the nose as well as tickling sensations, and both of these things can trigger sneezes. Dogs can clear some nasal infections on their own, but others will require medications or treatment to do so.

Nasal mites in dogs are exactly what they sound like – tiny arthropods that crawl around in your canine’s nasal passages.

They aren’t very well understood, it isn’t clear how common they are, and scientists aren’t even sure about the details of their life cycle. But it is clear that they can cause sneezing, as well as nose bleeds, nasal discharge, and facial itching.

To confirm the presence of nasal mites, your vet will need to stick a tiny camera up his nostril and just look for the creepy crawlies (here’s some nightmare fuel if you’d like to see what they look like).

If present, they’re usually treated with a standard anti-parasite medication, such as ivermectin.

Nasal tumors are not very common, but they can trigger sneezing. Nasal cancers appear more common in long-nosed breeds, and they often appear to have been caused by exposure to second-hand smoke.

Why Do Dogs Sneeze When Playing or Excited?

In addition to typical sneezes, which occur pretty randomly, a lot of dogs sneeze when they are playing or excited.

But despite what you may read in some corners of the internet, there is no clear consensus about the reasons this occurs.

Some authorities subscribe to a behavioral explanation, which essentially asserts that playing dogs sneeze to prevent play fights and general tomfoolery from escalating into a real conflict. The term “calming signal” is often used to describe these types of sneezes.

Others simply think that play sneezes occur because dogs wrinkle up their noses a lot when playing, and this flips their sneeze-switch. Still others think that they just become more likely to inhale irritants while cavorting with other canines.

As is so often the case, we may eventually find out that play sneezes are caused by several different stimuli.

Anecdotally, I have noticed that my own pup does seem to sneeze when we’re wrestling around or playing tag. But she certainly doesn’t appear to be sneezing to de-escalate our battles – she usually does so when she’s trying to ramp up the intensity.

Do Some Breeds Sneeze More than Others?

Sneezing is a pretty individual thing, and there isn’t a lot of concrete data about sneezing frequency available. That said, sneezing does appear to be more common in some breeds than others.

Specifically, it appears most common in brachycephalic (short-faced) breeds, including the following:

Many owners are shocked and frightened the first time they witness a reverse sneeze. It’s understandable – they are weird looking, and it’s easy to think your dog is in serious distress when they occur.

But you can relax. Reverse sneezes (technically called paroxysmal respiration) are probably not terribly fun for dogs, but they’re not usually a cause for concern. It’s wise to mention them to your vet if they occur frequently or alongside other symptoms, but they’re pretty common.

Nobody knows exactly what causes reverse sneezes, but it appears likely that they’re triggered by the same kinds of things that trigger normal sneezes.

But for whatever reason, they cause dogs to inhale rapidly, rather than exhaling rapidly, as they would in a typical sneeze.

We could try to explain what a reverse sneeze looks like, but they’re difficult to describe. Just check out this dog sneezing video to see one in progress:

When to Worry: Do You Need to Go to the Vet for Canine Sneezes?

Sneezing is usually not a big deal, but there are some cases in which it may signal the presence of a bigger issue. It’s probably a good idea to contact your vet in the following cases:

Owners often have a lot of questions about their dog’s sneezes, so we’ve tried to answer some of the most common queries below.

We’ve covered a few of these questions already, but we know that FAQ sections sometimes make it easier to find the info you’re after quickly.

Why do dogs sneeze when on their backs?

As with play sneezes, it’s not clear why dogs often sneeze when laying on their back.

Once again, it may serve as some form of communication, or it may just be that something about laying on their back makes it more likely that something will tickle their nasal passages.

Either way, it’s rarely a cause for concern.

What is a good dog sneezing treatment?

There isn’t really a good way to prevent your dog from sneezing unless he’s either sick or allergic to something in the environment.

If he’s showing signs of being sick or having an infection, you’ll need to take him to the vet. If he turns out to be allergic to something (and you can identify the trigger), you’ll just have to try to limit your dog’s exposure to the offending substance.

For example, if your dog is allergic to grass pollen, you may just need to limit his time in the grass, try to keep your house as clean and pollen-free as possible, and bathe him a little more frequently to wash the pollen off his coat.

Why is my dog sneezing non-stop?

We’ve all had sneezing fits before – sometimes your nose just gets riled up by a bit of pollen, dust, or something else that irritates your nasal passages.

Sneezing fits in dogs are likely caused by the same thing, and they aren’t any cause for concern unless the sneezing fits begin happening over-and-over.

Are there any home remedies for sneezing dogs?

There aren’t any remedies for the kind of normal, once-in-a-while sneezes that most dogs exhibit, nor are there any home treatments for sneezes that result from infections or illness (you’ll just need to go to the vet).

However, if your dog’s sneezing is triggered by allergies, you can try to limit your dog’s exposure to the offending substance, which may reduce the frequency of your pup’s sneezes.

Do nasal mites in dogs cause sneezing?

Nasal mites do frequently cause sneezing, and they can also cause other symptoms like nasal discharge and nosebleeds.

Fortunately, they’re pretty easy to eradicate with anti-parasite medications, so just head on over to your vet if you suspect your dog may be battling nasal mites.

My dog is sneezing a lot lately – what should I do?

If your dog starts sneezing more often than usual, you’ll just need to take him to the vet to ensure that he isn’t sick or suffering from nasal mites.

It may also be a good idea to give your home a good cleaning, to make sure the pollen, dust, and dander levels inside remain low.

What happens if a dog sneezes on you?

A lot of owners become worried when their dog sneezes on them, but it’s usually not a big deal — you just get covered in a fine mist of doggie snot. This is pretty gross, but unless you are immunocompromised it probably isn’t cause for worry. Just hose yourself off and contact your doctor if you are worried about it.

But it happens to all of us – my pooch seems to love sneezing directly on my face when we’re riding in the car. It’s just part of the dog-ownership gig.

My dog is sneezing – what can I give him? Can I give him an antihistamine or decongestant?

Sneezing is usually no cause for concern, and it is definitely not a reason to give your pet any medications without your vet’s approval. If you suspect your dog may be ill, just head over to the vet. Your vet can prescribe medications (if necessary) that are safe for your pup.

Never give your pet medications (even over-the-counter medications) without first consulting your vet.

Sneezes aren’t a big deal for most pups. They happen from time to time, and they’re usually no more consequential than your own sneezes. Just be sure to visit your vet if your pup exhibits any other symptoms that cause you concern.

Does your pooch sneeze a lot? Tell us all about him in the comments below! 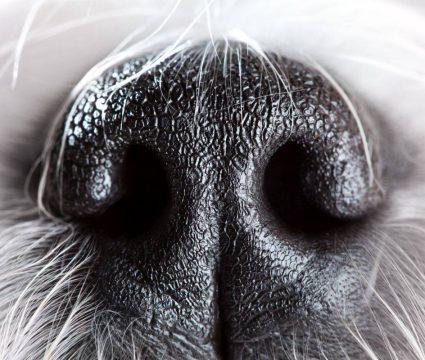 What Can I Give My Dog for Nasal Congestion?