Why Do Dogs Lick Wounds? Is Saliva the Ultimate Salve? 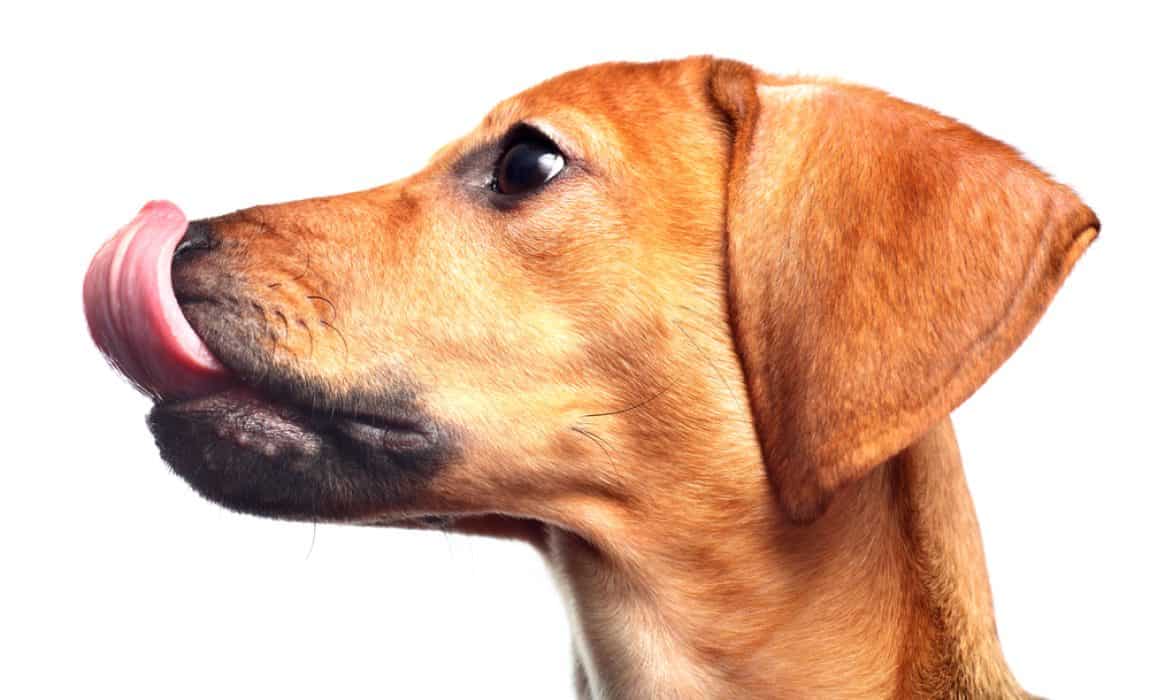 If your dog has ever suffered an injury, particularly one that involves some type of cut, you probably noticed that your dog began licking it repeatedly.

This stereotypical behavior – called wound-licking — is common to most dogs (and in fact, most other mammals).

But just because the behavior is natural and common doesn’t mean it is always helpful.

The Evolutionary Context of Wound-Licking

Whether or not wound-licking is a productive behavior in modern dogs, it was probably quite beneficial for prehistoric dogs and their wolf-like ancestors, who suffered cuts, scrapes or puncture wounds.

Open wounds can quickly become infected, leading to serious illness or even death, so they should usually be cleaned of any foreign debris or damaged tissue.

However, bereft of hands, canines only have one good tool they can use to manipulate things in their environment: their mouths. So, when faced with an injury that requires cleaning and attention, dogs began using their mouths and tongues to tend their wounds.

This doesn’t, however, mean wound-licking was always effective for prehistoric dogs.

Sometimes, wound-licking probably lead to infection or unnecessary tissue destruction. When you are a wild canine faced with a serious wound, you don’t have many great options – damned if you do and damned if you don’t, you could say.

Because the behavior remains firmly established in modern canines and has withstood the evolutionary test of time, it probably helped heal more wounds than it worsened.

Whether wound-licking behavior is beneficial or harmful on balance, it undoubtedly provides some benefits. Some of the most noteworthy include:

Most wounds are coated in plenty of debris from the environment, and every little grain of dirt and bit of vegetation that finds its way into the cut can compromise the wound’s ability to heal properly and may even lead to tissue destruction.

Wound-licking helps to remove much of this debris and give the wound a better chance of healing.

In addition to the debris that collects near a wound, some of the skin and underlying tissue frequently becomes damaged or infected.

This material must be removed to facilitate proper healing – a technique veterinarians refer to as debridement. A dog’s rough and muscular tongue is able to remove this type of compromised tissue effectively, if somewhat clumsily.

Although the effect is often mild, pain can be reduced by applying pressure or otherwise stimulating a wound. This works because the pain signal being carried by the nerves is replaced with other types of signals. However, it is also likely that dog saliva also contains the natural painkiller opiorphin – we know that human saliva does.

There are a number of misconceptions about dog saliva – especially as it relates to bacteria. Let’s be clear: Dog saliva is not sterile, nor is it “cleaner than your saliva.”

But, dog saliva does have antiseptic properties. In fact, dog saliva contains a number of different compounds that help to combat bacteria and prevent them from colonizing wounds.

Some of the most important compounds that serve these purposes include nitrate compounds, which break down into bacteria-inhibiting nitric oxide upon contact with the skin; the enzyme lysozyme, which is effective against some types (gram-positive) bacteria; and cystatins, which also exhibit antibacterial properties.

So yes, dog saliva can kill some bacteria!

In addition to the numerous benefits of wound-licking behavior, there are also risks associated with the practice. Some of the most important include:

Again, despite popular myths to the contrary, dog saliva is not sterile.

In fact, it is swimming with bacteria – just like our own. Some of these bacteria naturally live in your dog’s mouth while others come from the things dogs eat or lick.

While most of these bacteria are kept under control in your dog’s mouth, they can cause serious infections if they are introduced to broken skin.

While wound debridement is often helpful for accelerating the healing process, it should usually be limited to the time shortly after the injury occurs.

Dogs often continue to lick a wound after the damaged tissue has been removed – and this is not good. Ongoing licking can lead to the removal and destruction of the newly formed tissue, which will complicate and slow the healing process.

Most lick granulomas result from an anxiety-induced licking, but they can also occur when dogs repeatedly lick a wound.

As you can see, wound-licking is not always 100% beneficial, nor is it always destructive. It is a nuanced and complicated issue.

You probably don’t need to freak out if your dog licks a tiny cut on her paw or haunches, as long as it doesn’t continue for a prolonged period of time and the wound appears to be healing in a reasonable time frame.

Just be sure to practice good first aid and consult your veterinarian if the wound is serious.

On the other hand, it is very important to stop dogs from licking wounds excessively. Doing so becomes counterproductive very quickly and will often lead to secondary infections, tissue damage and other complications.

It is especially important to prevent dogs from licking surgical wounds. Surgical wounds can present a pathway for bacteria to penetrate deep into the body cavity, leading to widespread and potentially lethal infections. Additionally, the trauma caused by your dog’s tongue can damage her stitches, potentially causing the wound to reopen.

How to Stop Your Dog From Wound-Licking

It can sometimes be difficult to stop your dog from licking her wounds excessively, but there are a few techniques and products that can help.

Also called an E-collar, the Elizabethan collar is a large plastic cone that fits around your dog’s head and neck.

Because the collar extends beyond the end of your pup’s muzzle, she won’t be able to reach the wound with her mouth or tongue, but because the cone is very wide, she’ll still be able to access her food and water dish.

Few dogs enjoy wearing an E-collar (in fact, many dogs look downright miserable with them on), but they are undoubtedly helpful for putting an end to wound-licking behavior.

Yup, life inside the cone of shame is rough..

If you’re in the market for an e-collar, we recommend the Kong EZ Soft Collar or the All Four Paws Comfy Cone. 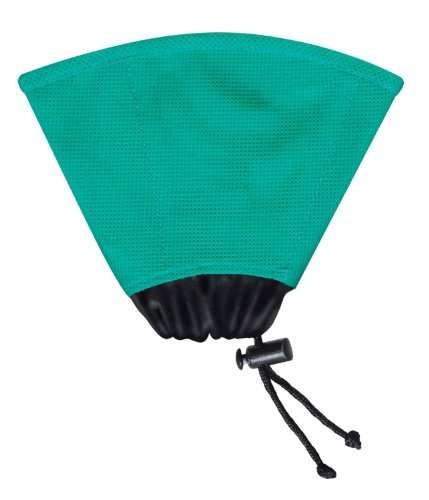 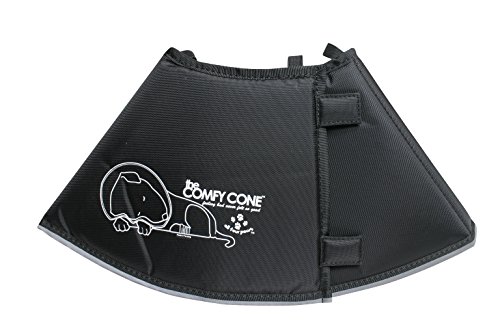 Inflatable collars are an alternative to E-collars. They look somewhat like the inflatable neck pillows many people use while traveling. Inflatable collars work by limiting your dog’s ability to move her head and neck, yet they aren’t as obstructive or uncomfortable as a traditional E-collar.

However, inflatable collars do not provide the degree of protection that E-collars do.

Most dogs will still be able to lick wounds on their paws or lower legs, and thin breeds with elongated muzzles may still be able to access their entire body while wearing an inflatable collar.

For an inflatable collar, check out our top pick below: 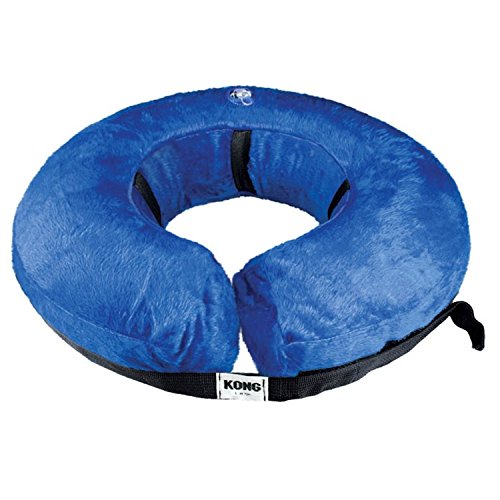 Veterinarians often instruct owners to leave a wound exposed to the air, which often accelerates the healing process. However, some wounds will heal effectively while covered with a bandage, and the bandage will provide some protection from your dog’s tongue and saliva.

Just be sure to consult with your vet first, before deciding to place a bandage on your pet’s wound.

Like proper bandages, some types of clothing can be helpful for protecting your dog’s wounds.

Assuming your vet doesn’t object to the practice, you can use things like t-shirts, bandanas or socks to cover your dog’s wound. It is important to use only smooth, lint-free fabrics while doing so, to avoid contaminating the wound with fibers.

If you are fortunate enough to spend most of your time together with your pup, you may simply be able to prevent most licking by offering your dog something more interesting whenever she starts slobbering on her wound. Just about anything can make a good distraction, including treats (we’d suggest a stuffed Kong), a quick game of tug-of-war, or just some good ol’ belly scratching.

Some of the best distractions stimulate your dog’s brain, which can cause her to forget all about licking her wound. For example, toys that contain hidden treats often work in such contexts, as do ice cubes made from gravy or other delicious liquids.

And don’t be afraid to get creative when trying to stop wound-licking behavior.

I recently found that I could distract my Rottie from licking a small wound she had by simply hitting “play” on a video with lots of dogs in it. She’d immediately go over to her TV-watching spot and forget all about licking her wound for twenty minutes or so.

This helped me avoid the need to fit her with an E-collar and helped the wound heal very quickly.

Canine First-Aid: What Can I Put On My Dog’s Cut?

Veterinary attention is imperative any time your dog suffers a serious wound or shows signs of infection (redness, swelling or greenish pus, being some of the most common); but you can care for most minor injuries at home.

Why Does My Dog Lick My Wound?

Many dogs will lick their owner’s wounds, probably do so for the same reason they lick their own wounds: They are trying to clean your wound and accelerate the healing process.

There may even be a little bit of nurturing behavior involved too, as dogs often lick to show affection or concern. You are, after all, a member of the pack and your pooch loves you! <3

Despite the good intentions, you probably want to prevent your dog from licking at your open cuts or sores.

If you’ve had your dog for any length of time, you have already been exposed to most of the bacteria and microorganisms growing on and in her body. This means that your immune system is probably already primed to deal with them, and you are probably unlikely to develop an infection in response to your dog’s spit.

Unless you do develop an infection. And that will suck.

You may have some immunity to your dog’s “native” microbial community, but Licky McGroundtaster is constantly encountering “foreign” bacteria. If your dog happens to pick up a dangerous strain while tasting the grass in the back yard, and then she licks your cut, you may very well develop an infection.

Don’t freak out if she catches you off guard and starts lathering up your laceration. Just go wash it off and apply a little triple antibiotic to it. Just be sure to visit the doctor immediately if it begins to show signs of infection.

Have you ever been faced with a wounded dog who licks her wound too much for her own good? What types of techniques or products helped you stop the problem? Has your dog ever made a wound worse by licking it continuously? Let us know all about your experiences in the comments below! 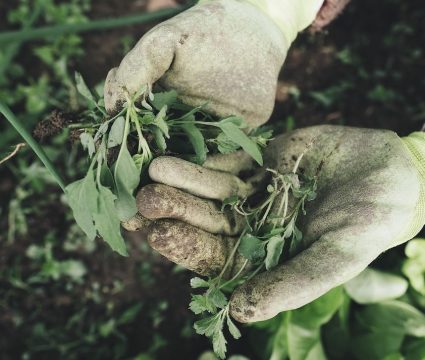 This was thorough and answered all my questions concerning my dog licking wounds,

Thank you for such a well researched and written post. This is everything we need to know on the subject of licking wounds