The Nine Best Vegetables for Dogs: Cruciferous Consumables for Canines! 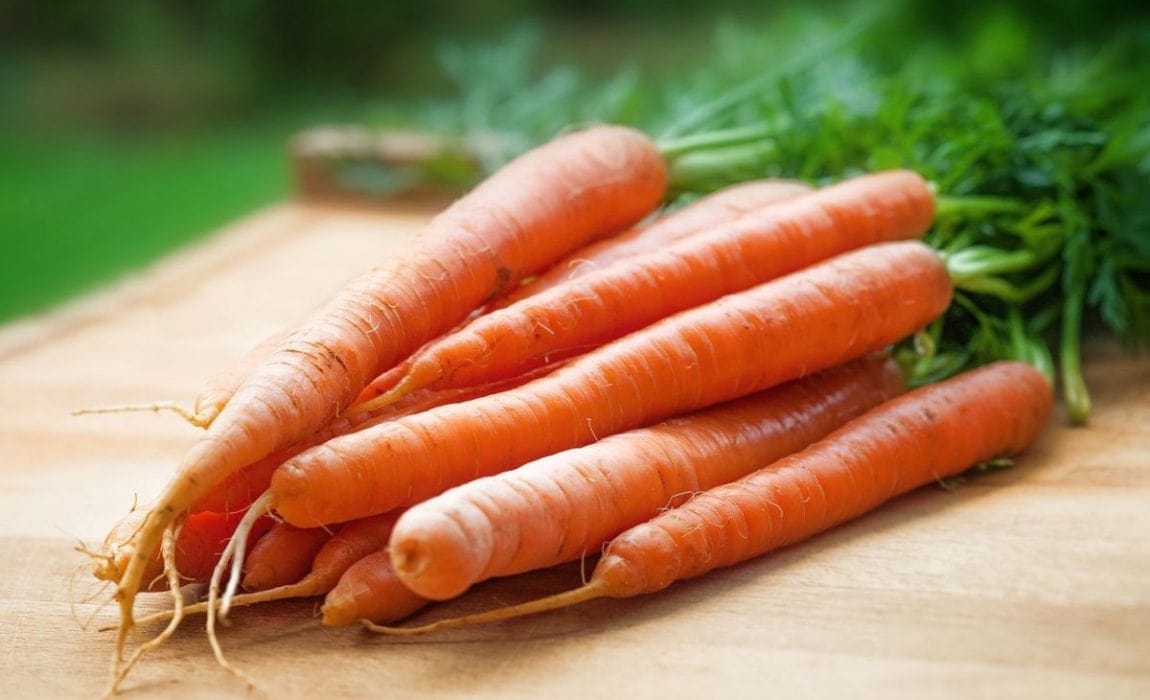 Whether you make your dog’s dinner from scratch or you just want to spoil her with an unusual treat from time to time, it pays to learn about some of the best vegetables for dogs.

Most people tend to spend a lot of time thinking about the best meat proteins for their dog (and rightly so), but dogs are omnivores who benefit from a varied diet that includes several different kinds of foods – including vegetables.

But you have to be careful when picking vegetables for your pooch, as some are poisonous or otherwise unsuitable for canines. Avoid these types of problems by sticking to the nine vegetables detailed below. Each one is not only safe, but nutritious too.

The nine vegetables below are all great options for your pet. Try a few and let us know what your pooch thinks!

Carrots are awesome vegetables for dogs. They’re incorporated into a number of commercial dog foods, and they are easy to add to your dog’s home-cooked food too.

Carrots are full of Vitamin A (like with other vegetables, the Vitamin A is provided in the form of Beta Carotene, so you don’t have to worry about Vitamin A toxicity) and they also provide a pretty good helping of Vitamin K and fiber.

In fact, you can even give your dog carrot juice as something to drink besides water if you’re looking to give them some vitamin-packed hydration or mix carrot juice with their daily kibble allotment to soften it up and add some extra taste.

I like to use carrots as low-calorie treats for my pup. I go to the farmer’s market, grab the biggest carrot I can find, wash it, cut off the stalk end, peel off anything gross, and give it to my 90-pound Rottie. She’ll then chew on it for hours before getting bored and hiding it somewhere (I throw the carrot carcass away after a single “use”).

Green beans are full of manganese, Vitamins A, C, K, and several in the B-complex, and a not-insignificant amount of protein, so they’re a great dietary item for dogs. They also have a fair bit of fiber, and they can sometimes be useful in firming up your dog’s poop (although the poops may be a greenish-blue color).

Most dogs seem to like the way green beans taste, and they’re easy to cook – just steam or boil them until they soften. Opt for frozen or raw green beans rather than canned varieties to ensure you aren’t giving your pet a ton of salt. Most dogs will accept green beans tossed to them treat-style, but you can also incorporate them into homemade dog food recipes.

Snow peas, sugar peas, English peas, and snap peas are all great vegetables for dogs. Peas are packed with protein, fiber, and a ton of vitamins, including most of the B-complex vitamins, as well as Vitamins A, C, and K. As with green beans, you’ll want to skip the canned varieties and select raw or frozen ones. Just steam them for a few minutes and serve.

Peas are great for boosting the protein content of a homemade dog food, although you should note that your dog won’t be able to absorb plant-based proteins as well as she can animal-based proteins. So, don’t use peas as a way of skimping on the meat – just use peas as a supplemental protein source.

Celery seems like nothing more than water and fiber, but this isn’t really the case. In fact, celery actually has quite a bit of Vitamins A, C, and K, as well as several B-complex vitamins. And although it does have some fiber, it actually isn’t as fiber-packed as you may think. Mistaken impressions aside, celery is a great treat for dogs.

Many dogs seem to like the way celery sticks “burst” with water. Some people even think that celery improves puppy breath, but we’ll leave that for you to decide. Just wash the celery before giving it to your dog – there’s no need to cook it (although your pup wouldn’t mind you slathering it with a bit of peanut butter).

Although most dogs probably aren’t terribly interested in a serving of brussels sprouts, they are healthy vegetables which are safe for dogs to eat. They have a lot of fiber and nutrients, including Vitamins A, C, K, and several members of the B-complex group. Steaming is probably the best way to prepare brussels sprouts, but any oil-free cooking method will work.

Just be aware that like most other cruciferous vegetables (including cauliflower, broccoli, and cabbage), brussels sprouts can make your pooch extremely gassy. That’s not really a problem for your dog (as long as your pet doesn’t have any trouble expelling the gas – otherwise it could cause cramping), but it’ll make you want to evacuate your home.

Many dogs love potatoes (who can blame them?), and they’re incorporated into a number of foods – including commercial and homemade varieties. Admittedly, potatoes don’t seem like a “real” vegetable (culinarily, they’re usually used as starches rather than vegetables), but your dog doesn’t care about any of that. She’ll just love the taste.

Although they aren’t as nutritious as some of the other vegetables on this list, potatoes do have some Vitamin C and a bit of Vitamin B6. As long as you prepare them sensibly (just cut ‘em up and boil them – don’t feed your dog raw potatoes) and use them in moderation (they can cause insulin spikes), they won’t cause any problems.

Unlike white potatoes, sweet potatoes (or yams, as some people call them) provide some seriously great nutritional value for dogs. Sweet potatoes are rich in just about every Vitamin your dog needs, aside from Vitamin D, and they’re loaded with fiber too. Also, they won’t cause your dog’s blood sugar to spike the way white potatoes will.

Most dogs love the way sweet potatoes taste, and they’re incorporated into a ton of commercial dog foods (particularly grain-free recipes). You’ll want to cut them up and boil them before serving them to your dog. You should also refrain from adding any salt, seasonings, or fats.

Another cruciferous vegetable that’ll turn your dog into a fart factory if you aren’t careful, broccoli is a healthy vegetable that you can give your dog. Just don’t give your dog too much broccoli, as it can cause pretty severe intestinal upset (aside from the gas, which is more of a problem for you than your dog).

Be sure to cut broccoli up into pretty small pieces, as the stalks can choke some dogs – particularly smaller pooches.

You can give it to your dog raw, but she’ll digest it more readily (and probably appreciate the taste more) if you boil or steam it for a few minutes. Broccoli is full of all the good stuff your dog needs, including most of the important vitamins.

I don’t want to hear it, nerds. I know pumpkin is a fruit — so are green beans and peas, but you didn’t say anything then, did ya? Pumpkin is clearly a vegetable in the culinary sense of the word, so let’s just move on.

Technicalities aside, pumpkin is a fantastic “vegetable” for your dog. It is full of antioxidants, fiber, and Vitamins A and C. And pumpkin is also helpful for dogs who are suffering from diarrhea, as its fiber content can help firm up your dog’s stool.

To prepare pumpkin for your punkin’, cut it into cubes and boil it. The cooked seeds are also safe for your dog.

Caution: Vegetables to Avoid or Limit

We are primarily focusing on good vegetables today, but we wanted to take a quick moment to discuss bad vegetables too. Some of these aren’t really dangerous in small amounts, and others will usually only cause digestive upset, but there are a few that may put your dog’s life in jeopardy.

In any case, there are hundreds of things you can give your dog that are safe and tasty, so there’s really no point in pushing your luck. Just steer clear of those listed below.

Note that some dogs have more vegetable-friendly palates than others, so don’t feel bad if your dog politely declines the greens and roots you offer. As long as your dog eats a nutritionally balanced food that meets the AAFCO guidelines for her life stage, she won’t need any extra vegetables.

Excited about the idea of cooking up fresh veggies for your pup? You may want to consider grabbing a dog cookbook for more recipe inspiration!

Just try to experiment with the different ones on this list if you really want your dog to get more vegetables in her diet. Which vegetables does your dog like best? Let us know her preferences in the comments below!

I have one that will eat anything and the other is very picky so I’m always looking for veggies that are good for her that she will eat. Thank you for the info.

Lovely article and advice! My dogs adore coconut meat, papaya, and blueberries too.