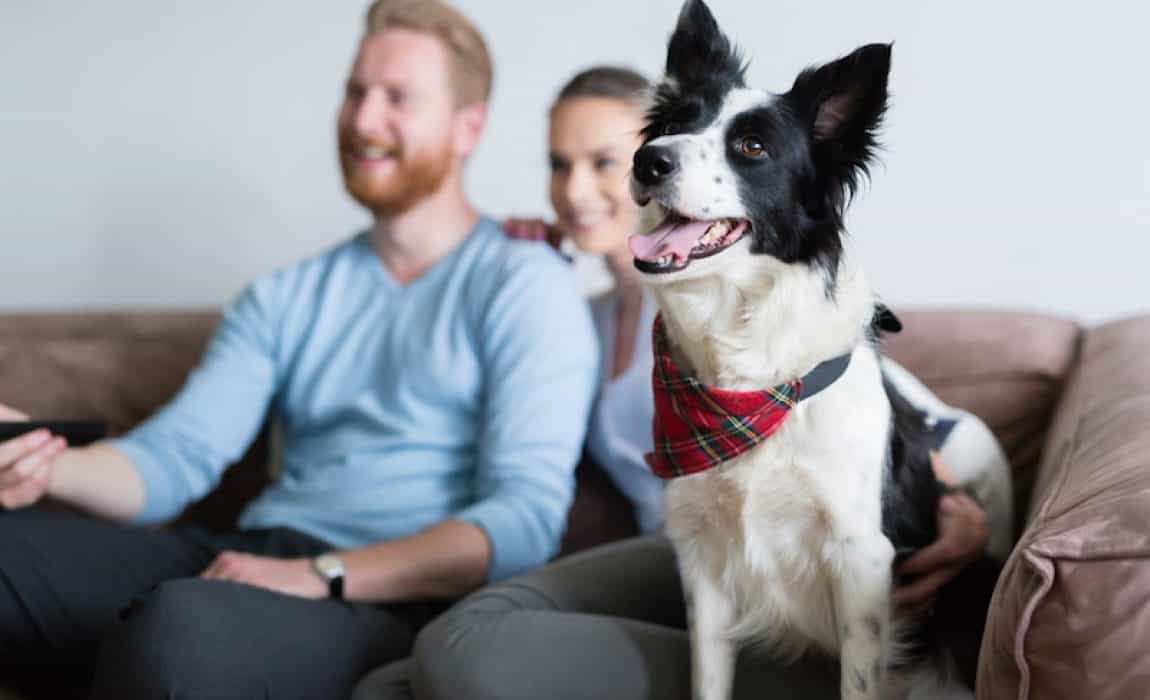 Most long-term dog owners have caught their dog gazing at the television on occasion, but new dog owners are often surprised when they see Fido staring at the tube. Many incredulous owners wonder if their dog is actually watching the TV, or if he is just starring in that direction.

And while it seems strange, dogs can and do see the images on television.

Dog Vision – What Can Dogs See?

Like most humans (and most other mammals), dogs collect three basic types of visual information: They perceive an object’s motion, its color and its shape. However, their visual capabilities differ from our own in several key ways.

For example, dogs have dichromatic, rather than trichromatic, vision. This simply means that they see fewer colors than we do, as their eyes rely on two types of color-collecting cone cells (blue and yellow), rather than the three types of cones (red, blue and green) that humans enjoy.

This doesn’t mean that dogs see the world in black-and-white; rather, they perceive a band of colors ranging from yellow to blue, with relatively few colors existing between the two along the color spectrum.

Dogs eyes also collect light much better than human eyes do, which allows them to see better in dim light. However, they are unable to distinguish between dark and light areas as well as humans can, and dogs rely more on color than brightness when viewing their surroundings. Dogs also lack the visual acuity of humans, so they can’t appreciate fine details as humans can.

But one of the most important distinctions between the eyes of humans and dogs that manifests in their TV viewing habits is something called their flicker-fusion frequency. Simply put, your dog’s eyes “refresh” much more quickly than yours do.

Consider flipping through a deck of cards. If you thumb the cards slowly enough, your eye can discern the different cards in the deck – that’s a queen, that’s a 5, and so on. But if you flip through the cards quickly enough, the individual cards become a blur; your eyes aren’t “refreshing” quickly enough to keep up with the changing cards.

In the old days (I just turned into my father), TVs refreshed their images at a relatively slow pace. Accordingly, dogs that tried to watch these old televisions would see the actors move in a “jerky” manner, rather than smoothly as occurs in real life. Humans never noticed this difference, as our flicker-fusion rate is much slower than those of dogs.

However, new-fangled high-definition televisions refresh images at a much faster clip. Humans probably don’t even notice this consciously, but the difference is night-and-day for our dogs. With a faster refresh rate, the images on the screen appear to move smoothly and naturally, which probably makes the whole experience more interesting for our pups.

Dogs do not behave well in most focus group settings, so we must rely on anecdotal information and a very minimal set of empirical data to draw conclusions about what they find most appealing on the TV.

Many dogs find dogs and other animals to be the most interesting thing on TV. This shouldn’t be surprising, given the fact that dogs have been shown to be particularly drawn to the faces of other dogs displayed on TV screens, no matter the breed in question. This suggests that they categorize dog faces into a unique category in their minds.

Anecdotally, I find that my pooch (who loves watching television and clearly finds some of the images interesting) finds few things as exciting as a full-body shot of a dog moving around in the world. Her ears will perk up, she’ll tilt her head quizzically and often approach the TV. She’ll follow the dog’s movements across the screen, and occasionally look behind the TV when the dog vanishes from the screen.

Just like humans, dogs experience TV programming with both their eyes and ears, and the sounds of television programs are often just as interesting to dogs as the images are. Here again, dog sounds are often the most compelling noises for dogs, but they also respond to the sounds of other animals, people and high-pitched squeaks.

Visual abilities aside, there is another important factor in a dog’s television-viewing habits: His personality. Some dogs simply appear to enjoy watching TV more than others do. But it is still important to remember that even the smartest, most visually oriented dogs have very short attention spans, so it won’t hold his interest for long.

Some of the factors that contribute to your dog’s relative interest in the television include:

Should We Encourage Our Dogs to Watch TV?

As humans, we’re constantly reminded to limit our screen time (the older among us may remember being repeatedly warned by our parents of the “dangers” of sitting too close to the TV), so the question becomes: Should we allow our dogs to watch TV at all?

There isn’t yet a lot of research on the subject, but because dogs rarely remain interested in the television for more than a few moments at a time, there’s probably little danger of them becoming couch potatoes. In fact, while television watching will never eliminate your dog’s need for exercise or time with his favorite person, it may prove helpful for battling separation anxiety and similar problems.

By leaving the television on and tuned to a dog-appropriate channel while you are away, your dog may benefit from the additional stimulation. This may help stave off boredom and some anxiety.

Other people have started trying to use television programming to treat their dog’s fear of vacuums, or desensitize them to the sound of a doorbell. By allowing your pup to watch a slightly muted vacuum cleaner move across the floor of a set on your TV, he may gradually become accustomed to the strange appliance and learn that he needn’t fear the real one that lives in the closet.

One company has even launched a network explicitly for dogs. Although it is still a relatively new venture, the Escondido Humane Society recently carried out a trial with the TV channel, and played it for a group of their rescued dogs. They found that the television programming temporarily reduced anxiety in most of the dogs studied.

So, there you have it. Dogs can see the images on your television, although they probably look a bit different, and some dogs appear unimpressed with the moving pictures. Nevertheless, some dogs seem to really enjoy watching television, particularly if you turn it to a channel they like.

What kinds of things have you noticed your dog likes to watch on the television? Let us know in the comments below. 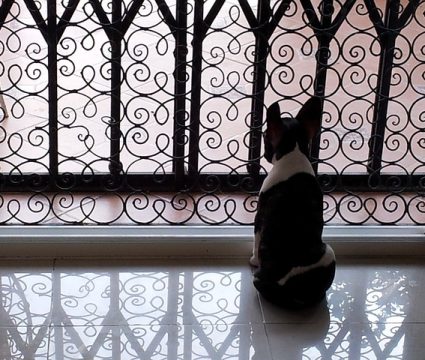