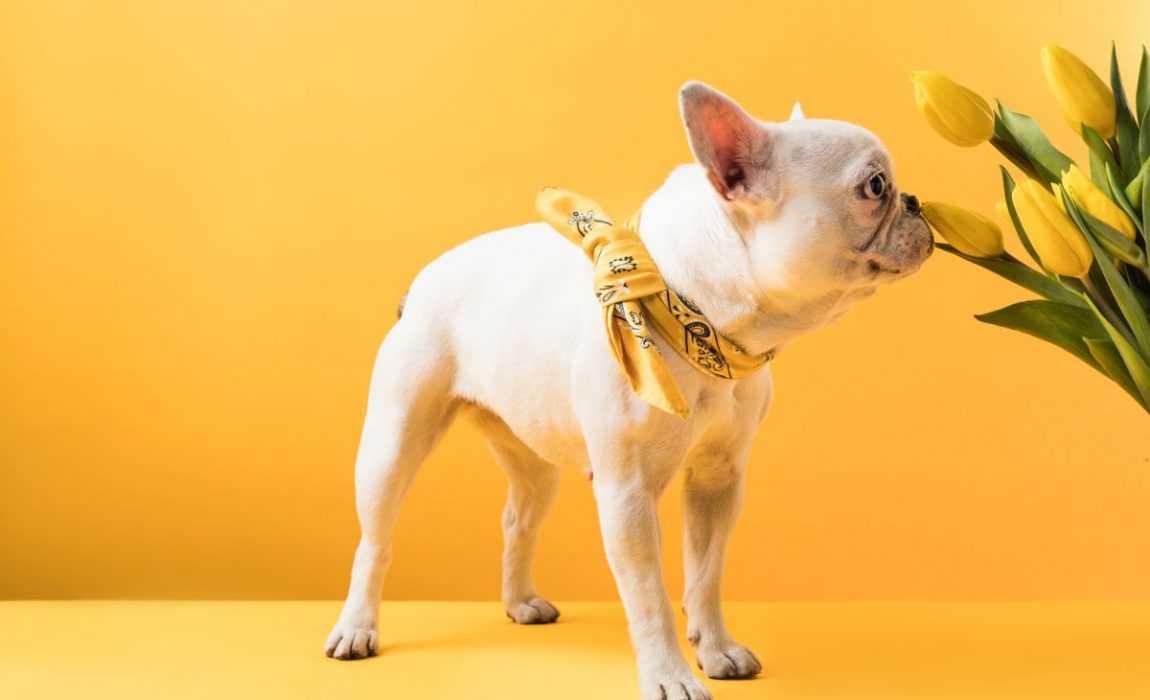 Flowers are a great way to brighten up your home or beautify your yard, but it is important to know that many flowers are toxic to dogs. Some may even prove deadly if eaten in significant quantities.

But don’t worry – we’re here to help. We’ll share 9 great dog-friendly flowers below, so, grab your favorite vase or your hand spade and read on!

9 Pet-Safe Flowers for Your Pooch

A number of plants and flowers can be safely planted around dogs, but we’ll discuss nine of the best options for dog owners below. We’ve tried to include dog-safe annuals as well as dog-safe perennials, plus indoor and outdoor options.

Roses are some of the most beloved flowers in the world, and fortunately for dog lovers, they’re pretty safe for canines. In fact, some restaurants even include roses (as well as other flowers) with their meals as an edible treat.

However, you’ll want to note that many roses contain cyanide in their leaves and stems, so be sure that you don’t allow your dog to munch on the green parts of the plant. Also, most roses have thorns, which may injure your pup while he’s browsing.

Gerber daisies (which are also called African or Transvaal daisies) are some of the most popular flowers around, given their bright and cheerful colors. Go ahead and pick whatever colors you like, because none should cause serious problems for your dog.

Gerber daisies are typically sold in cut form by florists, but they can also be planted in yards and gardens. They’re typically grown as annuals in cold climates, but those living in the south can use them as pet-friendly perennials.

African violets (also known as Cape marigolds) are colorful little ground-hugging flowers that are often grown indoors, where it is easier to provide the proper lighting and temperature these plants need. Some people even grow them indoors or inside terrariums.

But no matter where you grow them, you can do so without worry for your dog – African violets are generally considered safe and non-toxic for dogs. So, feel free to plant these dog-friendly perennials around your home.

Carnations are delicate-looking pet-friendly flowers that are occasionally grown in gardens, but they’re probably most commonly associated with Mother’s Day corsages. These familiar flowers have been popular throughout time. In fact, people have been cultivating carnations for so long that botanists aren’t even sure where they originally came from.

But no matter where they come from, one thing is clear: Carnations are unlikely to make your dog sick.

Chances are, if you’ve gone to the trouble of raising orchids, you certainly don’t want your dog to start chewing on your beloved plant. But it may help you feel better to know that while your plant may not survive the encounter, your dog will probably feel fine after doing so – most orchids are regarded as non-toxic to dogs.

However, there are roughly 28,000 recognized species in the orchid family (Orchidaceae), so it’s important that we don’t overgeneralize their safety. Just stick to the ten species below, as they’re all recognized as safe by the ASPCA.

Asters are pretty, daisy-like flowers that are often grown outdoors in areas with cool summers, but they can also be used to brighten up your kitchen or living room if cut and stored in a vase. There are almost 200 species of asters, and they differ in color and growth habit (most are pretty small, but some reach almost 8 feet in height!).

But no matter what type of asters you prefer, or how you intend to enjoy them, you needn’t worry about your dog eating them. Asters are generally considered non-toxic to dogs.

There are a number of different types of baby’s breath, but most feature clusters of small, white flowers. Baby’s breath is most commonly used in bouquets (either by themselves or with other flowers, like roses), baby’s breath is also grown in some gardens and yards.

But no matter how you use these adorable little flowers, you don’t have to worry about your dog eating them. They’re usually considered harmless to canines.

Flowers of the genus Alstroemeria are often called the lily of the Inca or Peruvian lilies. These colorful flowers are often sold by florists, and they’re also grown in many gardens. Because they’re non-toxic to dogs, they are a great option for families that include four-footed members.

However, it is important to note that while these pet-proof flowers are generally considered safe to keep or grow around dogs, you must be careful to avoid confusing them with any other lilies, as many are toxic.

Sunflowers are another great option for yards with dogs. Sunflowers are generally not considered toxic in reasonable amounts; in fact, many dogs enjoy eating the seeds that come from these pet-safe flowers. However, you definitely don’t want to encourage your dog to eat the flowers, as they may cause minor digestive discomfort in dogs who eat a bunch of them.

These flowers are also a good option for dog owners because they often grow several feet above the ground, where they’re out of reach for most dogs.

Even If Flower Are Safe, Don’t Let Your Dog Chow Down On Them!

Just because the flowers listed above are generally regarded as safe for dogs doesn’t mean you should push your luck. Just about anything can upset your dog’s stomach if he eats enough of it.

So, while you needn’t freak out if your dog nibbles on your roses from time to time, you don’t want to encourage him to do so.

Additionally, it is important to note that while the flowers discussed above are generally considered safe or non-toxic by veterinarians and botanists, this typically only means that they’re unlikely to cause serious illness or death. Many of the flowers listed above will cause intestinal discomfort, diarrhea, nausea or vomiting.

If your dog starts regularly munching on any flower or plant, you’ll want to take steps to address the issue. Either replace the flowers with others that don’t seem delicious to your dog, or come up with some type of physical barrier or dog-proof fencing which prevents your dog from accessing them in the first place.

Don’t Forget About the Water!

Typically, it is the actual flower – including the leaves, petals, roots, and stems – that causes problems for dogs. However, it is also important to note that the water that collects in the drip pan of your vases or planters may become contaminated with the toxins present in the plant. This means that your dog could become sick by drinking this water.

Accordingly, you’ll want to make sure that your dog doesn’t drink the water that collects in these pans – especially if the flowers you are using are a potentially toxic species.

What Flowers Are Toxic For Dogs?

Since you’re already reading about dog-friendly flowers that are safe to use around canines, we figure you may be curious about some of the plants and flowers that are often very dangerous for canines.

This list isn’t exhaustive, but we’ve tried to include a few of the most important species to note.

These vaguely cup-shaped purple flowers are quite toxic to dogs, and dog owners must use caution when planting these flowers in their yard or garden. All parts of the plant and flowers are toxic, but the bulbs (fleshy, underground storage structures) contain the most toxins.

If eaten, these plants can cause dogs to suffer from seizures, liver damage, and an irregular heartbeat.

Azaleas are handsome shrubs that bear beautiful blossoms each spring. But while these popular lawn and garden plants are certainly attractive, they can be quite dangerous for dogs. Ingestion of only a few flowers often results in repeated vomiting and diarrhea, and it can even cause a fatal drop in blood pressure.

Daffodils are certainly attractive flowers, but they extremely toxic to dogs. Dogs can suffer from severe intestinal disturbances if they eat a few of these yellow perennials, but the most acute danger is represented by the plant’s underground bulbs.

Dogs who eat daffodil bulbs may experience convulsions or a dangerous drop in blood pressure.

Tulips are some of the most iconic flowers on the planet. They’re not only beautiful, but they’ve also played important roles in human culture; long before the dot.com or housing boom, tulips were responsible for the first speculative bubble.

But while these flowers are certainly popular among gardeners, flower-enthusiasts, and botanical gardens, you’ll want to be careful planting them around pets, as they’re quite toxic. Dogs who eat tulips often suffer from severe oral irritation, nausea, and vomiting.

Kalanchoes – also called Widow’s-Thrill – are medium-sized succulents that produce pretty little flowers. They’re often grown as potted houseplants, but they can also be grown in rock gardens too. They’re often prized for being resistant to many common pests, but they’re unfortunately toxic to dogs.

Most dogs will only suffer from intestinal issues after eating a few flowers, but some dogs suffer from unusual heart rhythms, which may prove fatal.

Unlike many of the other flowers and plants we’ve discussed, which are represented by dozens of different individual species, there’s only one oleander species: Nerium oleander. Nevertheless, it is one of the most popular ornamental plants in the world. But unfortunately, it is also one of the most toxic.

Oleander ingestion can cause your dog to lose coordination, suffer from muscle tremors, or even develop fatal heart problems. It’s generally a good idea to avoid this plant if you allow your dogs to play unattended in your yard.

Sowbread is another perineal flowering plant that’s dangerous to dogs. Originally native to Europe, these plants are represented by more than 20 different species. Most are grown indoors as houseplants, but they are also raised outdoors in many parts of Europe and the Pacific Northwest.

Sowbreads, which are often called by their genus name Cyclamen, often cause minor illness involving digestive disturbances, but they can also trigger dangerous heart rhythms and seizures.

Like many of the other flowers we’ve discussed here, Amaryllis flowers are popular with gardeners, but they’re dangerous to dogs. Trumpet-shaped and available in a variety of colors, ranging from red to apricot, these flowers are often purchased as bulbs and then planted outdoors.

Amaryllis ingestion can cause dogs to suffer from typical digestive problems, including diarrhea and vomiting, but they can also cause more unusual symptoms, such as depression and muscle tremors too.

Calla lilies contain calcium oxalates, which can irritate your dog’s mouth and digestive tract. Dogs who eat these flowers (or any other part of the plant) will often suffer from extreme mouth irritation. Excessive salivation often follows, and some dogs may even have difficulty swallowing after eating these plants.

If you are ever in doubt about the flowers in or around your house, or your dog eats a flower of uncertain safety, contact your vet or the Pet Poison Helpline.

Alternatively, you can always speak to a vet quickly and easily via the Ask a Vet feature on JustAnswer. The ASPCA also maintains a database of pet-safe plants, as well as a list of those that are dangerous.

What kind of flowers do you like to plant around your home? Have you been careful to select only non-toxic varieties? Has your pet ever ingested toxic flowers? We’d love to hear about your experiences in the comments below!

Also make sure to check out our articles on: 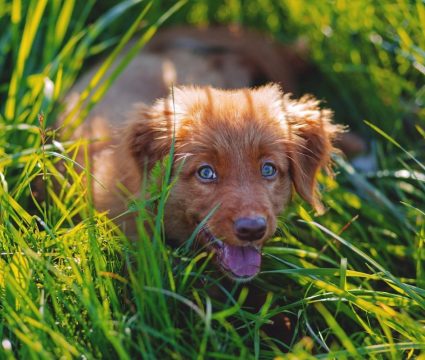