Why Does My Dog Eat My Underwear? 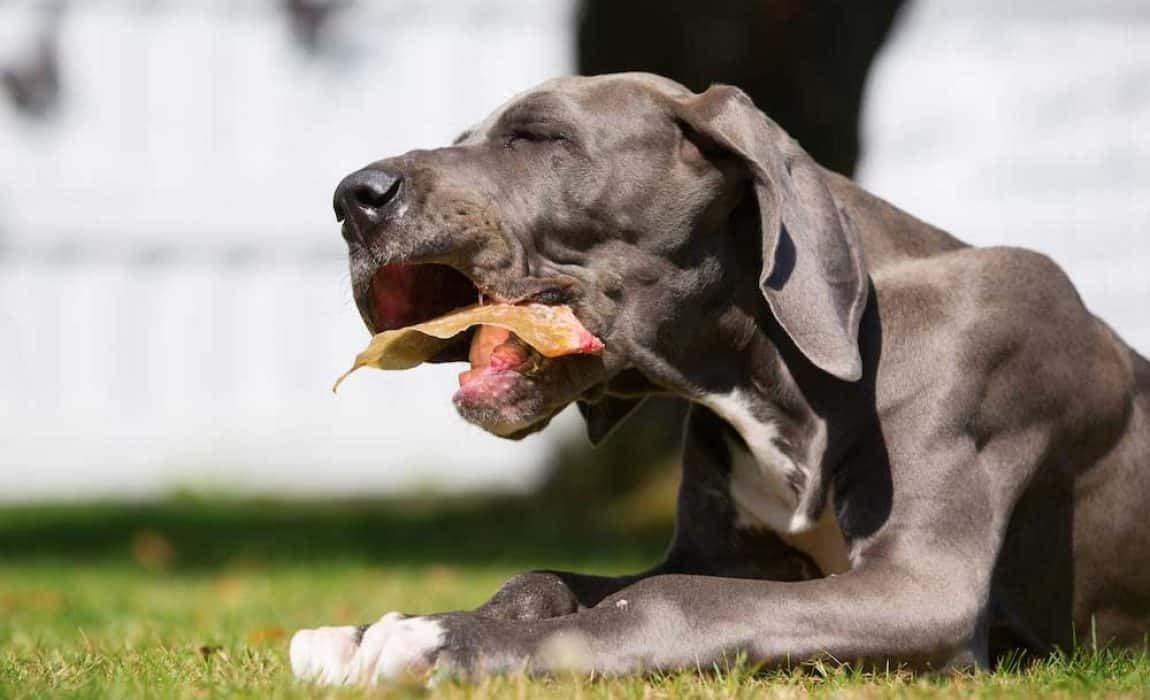 Here’s a question that’ll have most dog owners baffled, horrified and confused in their dog’s lifetime: Why does my dog chew on / eat my underwear?

We all know that dogs love to chew on things – and almost all of us will have frantically chased a dog around the yard to play an unwelcome game of fetch with their pooch and their favorite sock.

Today we’re digging in to take a closer look at this behavior, why dogs do it, and what dog owners can do to discourage it.

About 4 to 7 months into your pooch’s life, they hit the dreaded teething phase; symptoms of a teething dog is much the same as it is for a teething toddler: It’s painful, uncomfortable and they will likely start chewing on anything within reach to relieve it.

For some puppies, they turn to chewing underwear, socks, shoes and anything else they can get their tiny developing teeth on.

What do you do about it? Teeth coming in can be itchy and uncomfortable; the best thing you can do is to give them a more acceptable chew toy to chomp on – some are designed specifically for teething pups.

Reason #2: Boredom or Seeking Your Attention

Could your dog be trying to get your attention?

Licking, destructive chewing and eating objects is part of a range of behaviors commonly exhibited by dogs seeking attention from their owners, continuing with a nervous habit or simply trying to tell their owners something, like “Hey! I don’t like this!”

Your best solution is to find the root cause of your dog’s nervous tick; simply removing the object of their obsession without treating the root cause means they’ll just find something else to chew on instead.

Reason #3: They Could Be Exhibiting “Pica”

When going a little further than attention-seeking behavior, dogs chewing on (or eating) objects with non-nutritional value is referred to as Pica, a disorder also found in humans.

The objects aren’t just limited to underwear and could be literally anything from rocks to paper: Our recommendation is to take your dog for a visit to the vet, as pica might have a medical (or psychological) root cause to be looked at – nutritional deficiencies, of course, are one, and a simple change of diet could be all that’s needed to fix it.

Pica can also cause a range of gastro-intestinal problems – it’s never good to eat things that, well, aren’t food.

Sometimes older dogs will exhibit behavior resembling teething, often for the same reasons puppies do it: Alleviating discomfort and strengthening what they’ve got.

First, you’ll want to take your dog to the vet and make sure their teeth are OK and that no dental work is needed. Veterinary teeth cleaning can be pricey, which is why it’s best to regularly brush your dog’s teeth to limit intensive cleaning procedures.

Once you’ve ruled out any dental troubles, your best bet is to distract your dog with a more suitable chew toy – many chews are specifically designed to help your dog’s tooth and gum health.

While it’s not as common a cause as the others we’ve listed here, sometimes dogs will take to play-hunting the objects around them – and in some cases this might just happen to be your underwear.

Again, the best remedy is distraction and replacement: Give them something that’s okay to play with instead.

Going back to their more primal roots, dogs – like many other animals – are extremely focused on scent.

When dogs scratch or cats rub themselves lovingly against their owners, they’re just spreading their scent all over you – and vice versa. It’s a way of marking their territory, asserting their dominance to other dogs and re-assuring their owners that everything is cool.

Unfortunately, dogs are prone to go for items like socks and underwear because it carries the strongest marker of their owner’s scent.

Without going into too much detail about scent glands and where they’re found, your animal is likely smelling your pheromones on your clothes – that, in turn, they see as a good thing. This excites your dog, and they will seek out your scent much like a police dog sent out to find someone’s stash.

It’s kind of gross, but they might be after your underwear because they just love you SO much!

Search dogs are trained to search by watching their owner’s reaction when they succeed: A fuss is made, heads are pat with an “attaboy!” and a treat is given.

Your answer for discouraging your dog’s negative behavior lies in the first thing we’ve just mentioned there: A fuss is made. Do you react hysterically when you find your dog chewing on your underwear, grab it out of their mouths and walk away in a huff?

If you do, don’t. Dogs who do this for attention will react accordingly by continuing to do it because it provokes a reaction in their owner – even if it’s not the good kind of attention.

Dogs who do it for other reasons could quickly feel “shamed” and develop other nervous issues, which might exhibit in the same behavior or simply give rise to an entirely new one.

Try these tips if you want to discourage your dog’s underwear-hunt:

Have you recently had to discourage this behavior in your pooch, or are you still at it? Get in touch and let us know. 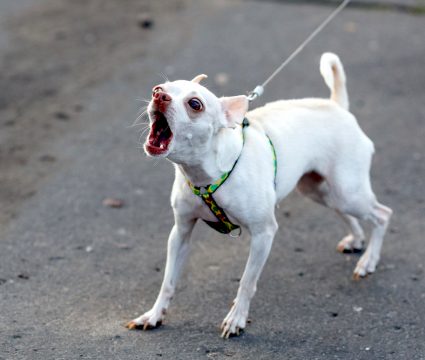 How to Cure Leash Aggression with Leash Reactive Dogs

6 pairs of underwear later and I’m very frustrated. She only does it when I’m in the shower or otherwise occupied and never in front of me. At first I thought I had just left them on the floor or something (might have been how it started) but she graduated to pulling them out of the drawer so I made sure to be diligent that the drawer stays closed except when I’m pulling something out. This time I’m 95% sure the drawer was closed and I think she pulled it open (she’s a pretty smart dog). My last resort is moving to a higher drawer (she can theoretically reach it but it would be much more difficult so I think less likely to pull open). It’s the highest drawer I have so hopefully it works. Not sure what the next step is after that.

Sounds like you have a very determined doggo, Jennifer! Changing drawers sounds like a good idea, but you may also want to look into some kind of child-proof door latch if that doesn’t work.
Best of luck!

I am going through this now. My landseer newfoundland will find my underwear and chew just the crotch area. No matter what I do, he searches and destroys my underwear. He’s even knocked over my hamper. Nothing works I need help!!!

That has to be frustrating, KC! Have you tried any of the recommendations from the article yet?

I have an old basset hound that has gotten absolutely out of control with eating peoples clothes. it started with bikini bottoms and underwear but she’s graduated to even pants and thick shorts! She doesn’t do it for attention because we almost never catch her, she is very sneaky and exploits every opportunity. She has absolutely no interest in any toys – never has – so providing an alternative isn’t an option and she can unzip bags, so whenever we have company we have to remind them over and over how horrible she is about this. Problem is she’s so sweet when she’s around everyone that they can’t imagine… until their $100 pair of yoga pants or brand new shorts are laying on the floor without a crotch…

Sounds like a pretty focused four-footer, Theresia! Fortunately, that’s one of the few problems you can almost completely prevent with management strategies.
Good luck staying one step ahead of your hound!

My dog has really bad separation anxiety and one of the behaviors associated with this is eating the crotches out of my panties when I am not home. To correct a behavior, most of the time you have to catch your dog in the act of the behavior you want them to discontinue. Since he only does this when I am not around, I was trying to be creative in coming up with a way to get him to stop doing this. I wanted to run an idea past you guys and see if you think it will work.
My idea is to get one of those furbo cameras/ treat dispensers and when I catch my dog in the act of eating my undies I could first get his attention through the microphone telling him a stern “no rusty” (at this point in pretty sure he will stop because he is terribly ashamed of this behavior when I find the remnants of evidence in the aftermath) and once he obeys I could toss him a treat from the treat dispenser…. my only concern with this is that I am not sure if he will understand me to be correcting the behavior or if it will be taken as encouragement since I haven’t come up with a way to give him something else he can chew on… what are your thoughts on this?

Hey, Bryn. That may work, but it’d surely be much easier to just prevent the behavior in the first place. We’d recommend just keeping your underwear somewhere your dog can’t access them.
Best of luck!

What if hearing your voice trigger’s the anxiety even more. Could putting multiple pairs of underwear in a sealed zip lock bag and then placing in hamper help stop the behavior?

I had a rescue mutt that I found was eating my underwear because one day he was pooping out my blue cotton underwear. He waddled away as I approached so I watched. After a bit he finished and just walked away. I tried to keep other things away from him but sometimes he must have gotten a pair or sock before I put it in the washing machine. I would occ finger underware when I was mowing the lawn.
Once I saw a sock go down and I rushed him to the night ER vet. They did hydrogen peroxide and got the sock and a sponge I didn’t know was in him. (He never shreaded anything
he ate.) The ER taught me how to do the H2O2 trick and I used it several times over his 5 years. ( He passed when 5yo of bone cancer.) He loved rawhide so he got all he wanted, he was a real chewer of rawhide and hard veggie chews, of various shapes and flavors when I was home, and he always had his stuffed toys. He never ate those but he had bigger geese and hedgehogs. He brought them to bed and a cold wet toy you rolled on was a rude awakening.
I guess he had pica after reading the article. My vet never really said anything when I brought it up.
It was nice to find a reason, but I wish I knew the underlying. reason why. I’ll never know that now.
I was very, very lucky as everything went through whole that I didn’t catch going in.
Thanks for the info.