Why Do Dogs Chase Their Tails?

Dogs certainly do plenty of strange things! And sometimes, there’s nothing we want more as dog owners than to be able to ask our pups why they do the things they do.

One question that everyone wants the answer to is why dogs chase their tails. But don’t worry — we’re here to help!

We’ll try to explain tail-chasing behavior (and illuminate the triggers that cause it) below.

What Is Tail Chasing Behavior?

Tail chasing behavior is just what it sounds like — dogs occasionally catch sight of their tail and chase it around in a circle.

This behavior is common in puppies, but most typically grow out of it. Tail chasing behavior that continues into a dog’s adulthood, however, may be more complicated.

If you’ve never seen it, you’re missing out, because it’s an absolute riot. Check out the dog tail-chasing video below to see the behavior in action.

Why Do Dogs Chase Their Tails?

There are a number of reasons your pup might be chasing his tail. We’ll detail some of the most common reasons tail-chasing behavior occurs below.

Puppies are not born with a strong sense of body awareness. They have to be taught to pay attention to all of their limbs.

Because of this lack of body — especially rear end — awareness, it’s not easy for them to recognize their tail as one of their limbs. They may think it’s another small animal or a toy and feel compelled to chase it.

When your cute puppy chases his tail and everyone in the room lets out an “aww!” and gives him attention, he remembers.

If he does it again and gets the same result, he’ll keep milking this new trick for all the attention it will get him.

Dogs are intelligent and pick up on human reactions to their behavior easily. Many dogs will continue tail-chasing behavior into adulthood because they were indirectly reinforced by the attention their fur parents provided.

Occasionally, tail-chasing behavior is caused by a medical problem.

Discomfort in the tail, lower back, legs, genitals or anus can cause enough irritation to make a dog spin around to try and chew or lick whatever hurts.

In exceptionally rare cases, neurological diseases — such as epilepsy — can cause tail-chasing behavior.

If your pup has suddenly begun chasing her tail, it’s a good idea to make an appointment with your vet, just in case.

Just like their human counterparts, dogs can be afflicted with obsessive compulsive disorder. In fact, spinning and tail-chasing are some of the most common compulsive behaviors dogs exhibit.

If your dog is a compulsive tail-chaser and displays other symptoms like trying to catch non-existent bugs, excessive grooming, or staring at the wall and not moving, you’ll need to make an appointment with your vet, as you may be dealing with an OCD or autistic canine.

Do Wolves Chase Their Tails?

Sometimes, it can be helpful to consider wolf behavior when trying to understand the behavior of domestic dogs. But unfortunately, it doesn’t provide much help in this case.

Wolves and other wild canines — typically young pups — have been observed occasionally chasing their tails, but there are no major studies on the subject.

Since canines are predators, their prey instinct may be the explanation for tail-chasing. Small, fast moving furry thing equals a fun toy for puppies!

Is Tail Chasing More Common in Some Breeds?

However, there are some breeds that have a higher rate of OCD or compulsive behaviors.

Bull terriers, for example, are prone to spinning behaviors, which could include tail-chasing.

Many large dogs like golden retrievers and German shepherds are prone to over-grooming behaviors like licking and chewing their limbs excessively — this could result in tail-chasing behavior as well.

Why is your dog chewing his tail? Pain and discomfort are the most common reasons. Skin irritation, tail injuries, and other physical ailments can cause a dog to chew on his tail because he doesn’t know how else to respond.

If you notice your dog chewing on his tail excessively, make an appointment with your vet to have his tail examined.

Is It Bad If My Dog Chases His Tail?

Occasional tail-chasing is a relatively normal dog behavior, especially if your dog is still a puppy. But, if the tail-chasing is frequent, or your dog won’t respond to you and can’t be distracted while chasing his tail, there may be underlying concerns.

Essentially, you need to figure out if your dog’s tail-chasing behavior is an occasional, harmless indulgence, or a problematic behavior. Unfortunately, compulsive tail-chasing can be hard to identify and distinguish from normal dog silliness.

He may have a compulsive tail-chasing problem that’ll require professional help to correct.

What if my dog chases his tail and growls?

Vocalization while tail-chasing — including growling, inconsistent whining, grumbling, etc — is frequently seen in dogs with OCD.

If your dog growls while chasing his tail, consider reaching out to a veterinarian that specializes in neurology or a veterinary behavior specialist.

What if my dog is chasing his tail and crying?

How Do You Stop a Dog from Chasing Its Tail?

If you’ve ruled out all other causes of tail-chasing and have determined that it’s reinforced behavior (meaning that he’s doing it to get attention or achieve some other goal), there are some steps you can take to reverse it.

For the Easily-Distracted Dog

If your pup doesn’t seem particularly invested in tail-chasing and just does it out of boredom or to entertain his humans, it may be super easy to discourage the behavior.

When you notice your dog is starting to tail-chase, grab his favorite treat or toy and excitedly call him over for a reward. Don’t be afraid to throw in kissy noises, claps, thigh-slaps, happy dancing, or anything else that entices your dog to come to you instead of tail-chasing.

For the Invested Pooch

Sometimes, the easy way out doesn’t work. Even if the tail-chasing behavior isn’t compulsive, it can be hard to interrupt if your dog doesn’t respond well to simple interruptions. Worry not — you’ll just have to get creative!

Step One: Teach a “Find It” Command

One of the best commands for interrupting an unwanted behavior is “find it!” All that “find it” does is redirect your dog’s attention from whatever he’s doing to an exciting reward — like high-value treats or a favorite toy.

It’s a simple, easy command for your dog to pick up, and it’s fun, which makes it rewarding for your dog.

Once your pup has picked up on your fun “find it” command, you want to start giving her the command when it’s harder for her to respond.

Try practicing “find it” when your dog is playing with both humans and other dogs, when meeting exciting new people, and any other time your dog is amped up and excited.

Reinforcing “find it” in high-arousal environments will help interrupt tail-chasing behavior because it teaches your dog to listen to commands even while distracted.

When your pup is responding quickly to “find it” in distracting environments, you can start giving the command when tail-chasing behavior begins.

Try to give the “find it” command as soon as you notice your dog starting to chase her tail. It’s easier to distract her from tail-chasing if she isn’t invested in it yet.

If she responds, get over-the-top excited. Let her know how rewarding it is to listen to the “find it” command instead of tail-chasing.

Step Four: Reward Your Dog for Waiting for a “Find It”

Now that your pooch gets the idea that tail chasing results in her human bringing her a reward, she may begin to tail-chase — and then hesitate.

This is where behavior modification begins — your smart pup understands that when he starts to chase his tail, you’re going to interrupt him. In response, he may go to chase his tail but pause and look to you before he starts. Reward that immediately!

This teaches your dog that tail chasing means my human brings me a reward, so why should I bother chasing my tail at all? I’ll just take my treat, please!

Your brilliant pooch will start to look for his reward before even exhibiting the tail-chasing behavior.

If your dog has a solid “leave it” or “stop” command, you can absolutely see if he will respond to it.

The reason the above methods are suggested, however, is because they use positive reinforcement to modify your dog’s behavior.

There are some dogs that do well with positive punishment — that is, adding something aversive (firmly telling your dog to stop means adding stress) immediately after a behavior, which teaches your dog not to perform the unwanted behavior (tail chasing).

Unfortunately, positive punishment can negatively affect the behavior of an already shy or fearful dog.

You know your dog better than anyone — if she’s naturally bashful, fearful, or generally just a soft pup, she may do better with positive reinforcement. But if she’s headstrong or aloof, it may be worth trying positive punishment.

Does your dog chase her tail a lot? Have you tried anything to stop the behavior, or do you just find it entertaining? Do you have questions about tail chasing behavior that didn’t get answered in this article? 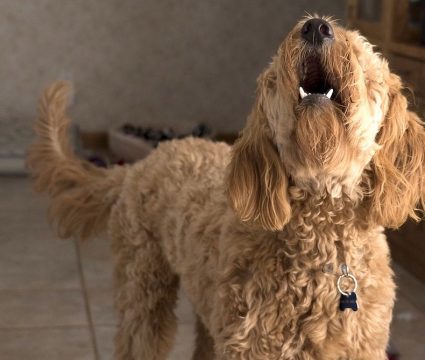 My Dog Barks At Everything- What Should I Do?

Gem is a Denver-based animal industry professional and up-and-coming content creation specialist. They have experience in dog training and behavior, sheltering, and they currently work for a veterinary clinic.