What Is a Piebald Dog? 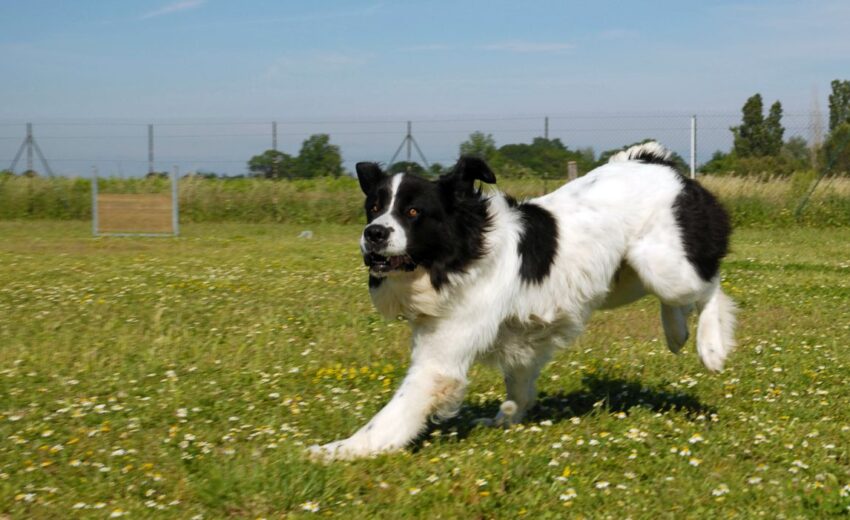 Canine coats come in a rainbow of colors and patterns, including brindle, merle, and — the subject of our discussion today — a particularly striking color combo called piebald. Piebald isn’t a coat term as well-known as others, but we’re willing to bet you’ve seen a piebald pup or two around.

Discover the ins and outs of the piebald coat pattern and learn which breeds carry the gene with us below!

Key Takeaways: What Is a Piebald Dog?

Piebald dogs (who are sometimes referred to as “pieds”) are easy to distinguish from most coat patterns due to their random white markings.

Just note that other names, including parti-colored, pied, “Landseer” in Newfoundlands, “panda” in German shepherds, and “flowered” in Shar Peis, are also used to reference a piebald coat.

Also understand that, though distinct, the piebald coat pattern isn’t completely unique — it is somewhat similar to the mantle and Irish spotting color patterns. However, it is caused by a different gene mutation than these coat patterns.

What Determines Whether or Not a Dog Will Be Piebald?

As with other coat patterns, piebald coats are directly linked to a dog’s genetic makeup.

In canines, a mutation of the Microphthalmia Associated Transcription Factor (MATF) gene causes a random deletion of color, leading to the white spotting seen in piebald pups.

The white coloring in piebalds correlates with the S locus allele, with dogs inheriting one copy of the S locus showing less white markings than those with two copies of the S locus.

The piebald gene’s mode of inheritance varies from incomplete dominance to autosomal recessive, depending on breed, meaning breeding a piebald dog doesn’t always mean you’ll wind up with piebald puppies in a litter. While it may be a possibility in many cases, it isn’t a guarantee.

Additionally, in breeds where the gene is inherited in recessive fashion, two normal-looking doggos may produce a piebald pup, if they both had one copy of the gene.

Which Dog Breeds Can Be Piebald?

More than 25 breeds can carry the piebald gene, meaning you’ve most likely seen a piebald dog and haven’t even realized it.

Some of the breeds that occasionally carry the piebald gene include:

Note that piebald coats are not permitted by the breed standard or supported by breed fans in all cases.

Piebald Boerboels, for instance, are only allowed to have white markings over a third of their body, or they risk disqualification, while piebald or “panda” German shepherds are completely forbidden by the breed standard.

Check Out Some Other Canine Coat Patterns!

Piebald isn’t the only interesting canine color combo around — check out some of these interesting looking dogs too!

Are Piebald Dogs Healthy? Do They Have Health Concerns?

Piebald dogs are typically just as healthy as pups with other coat patterns, though you should seek an ethical breeder who performs health testing and employs good breeding practices to avoid issues.

It’s also important to note that the MATF gene mutation responsible for the piebald look is sometimes responsible for deafness. This isn’t always the case, but it’s something to be aware of.

Can You Tell If a Dog Has the Piebald Gene?

It’s easy to look at piebald dogs and tell they have the piebald gene — that’s pretty obvious! But it obviously isn’t possible to tell if a dog with a single copy of a recessive version of the gene is present by just looking at him.

The only way to know for sure your dog has a piebald gene is to get your dog’s genes tested via a blood or saliva sample (aside, that is, from breeding him to a known gene carrier — if you get piebald babies, he clearly had the gene).

Responsible breeders can typically notify you of this as they track their breeding stock, but you can also seek the testing yourself online. It typically costs between $40 and $50.

For the most part, piebald dogs are healthy and require no special care. So, they can be just as suitable for first-time dog owners as canines with any other coat color (assuming the dog breed itself is good for beginners).

However, if your piebald pup has large areas of white, special care should be taken in the sun to avoid sunburns. This may include covering your dog with a lightweight shirt when he’s outside or avoiding outdoor time during the sunniest parts of the day.

Also, understand that deaf piebald dogs require special handling and training, but medically, they should be just as healthy as other canines.

Do you have a piebald pup at home? What breed is he? Did you specifically seek him out because he was a piebald? Tell us about him in the comments! 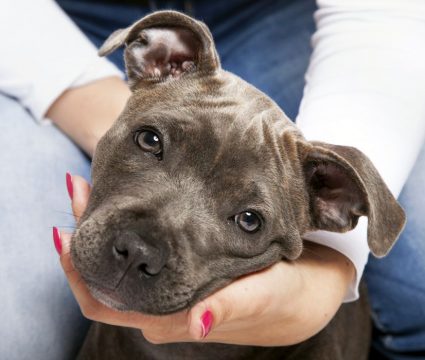 I have a husky/border collie he is beautiful. He is mostly white with a large black spot in the back. His head is black and white. He is the cutest boy ever. His name is Oliver and he is a service dog as well.

My piebald Chihuahua is the love of my life. I take her everywhere and she gets such sweet comments every time we go out. Her name is Mocha Grace. She has black, brown, white and gray markings. She is very special ❤

She sounds wonderful, Virenda. Thanks for sharing!