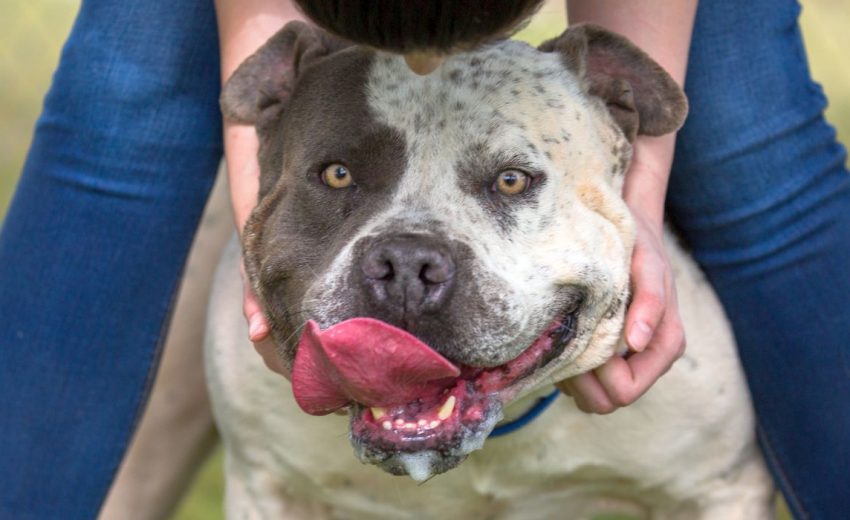 As all pit bull lovers know, these handsome puppers come in a rainbow of colors and patterns, from the beautiful blue to the striking brindle. But there’s one look creeping up more and more that has people talking, both positively and negatively.

We know the controversy is fierce, but since there’s a lot of chatter about them, we wanted to bring you the scoop.

Below, we’ll discuss what merle pit bulls are and break down what all the fuss is about.

What Is a Merle Pit Bull?

A merle pit bull is exactly what the name describes: A pit bull in the merle coat pattern. There’s no special advantage or perk that comes with the color, other than the merle’s famously eye-catching look.

For those unfamiliar with dog coat patterns, merle fur coats often display a patchy appearance with various sections of diluted and fully pigmented colors, usually consisting of shades of black or red dotted or swirled over blue and white.

Also known as dapple, merle is most commonly seen in Australian shepherds, Shelties, and Catahoula leopard dogs, but there are many other merle dog breeds out there to explore if the pattern tickles your fancy.

Though beautiful, merle is a bit of a controversial pattern due to the gene that causes the coat pattern. In addition to altering a dog’s color, the merle gene can affect everything from the coloring of your dog’s skin to his hearing and eyesight. Crazy, right?

Worse, your dog can be a carrier of the merle gene without the wild coat pattern (known as the “cryptic merle” phenomenon).

Why’s this a bad thing? Because two dogs with the merle gene should never be bred together to avoid serious complications. These “double merle” offspring are at risk of being born deaf or with serious eye issues.

Because of these hidden or so-called “phantom” or “cryptic” merles, genetic testing before breeding is a must to avoid problems.

How Can You Tell a Merle Pit Bull from a Brindle?

Telling a merle pit bull apart from a brindle pittie is relatively easy since they’re vastly different coat patterns. Dogs with brindle patterns look kinda like tigers, with a brown base and black striping, while merles feature an overall splotchy look.

Eye color is another tell here, with blue eyes or bi-color eyes sometimes seen in merles. This trait isn’t typically seen in brindles.

Is Merle a Natural Coat Color for Pit Bulls?

Now, we think all doggos are handsome and deserve belly rubs, but with the rise in merle pit bulls, many people are wondering what the official word is about them from show ring circles and if they can be entered in the breed registry.

With merle pit bulls, this is a gray area. Why? Because some people confuse the American pit bull terrier with other bully breeds.

Now, the American pit bull terrier isn’t recognized by the AKC, but their cousin, the American Staffordshire terrier, is. Unhelpfully, “pitbull terrier” is listed as another name for these in the breed overview.

The American Staffordshire terrier is permitted in all colors and patterns, per the AKC standard, including parti or patched. Dogs that are more than 80 percent white, black and tan, or liver are seen as less than ideal in the official standard.

Long story short: Officially, merle is a banned color in American pit bull terriers and isn’t naturally occurring, but similar bully breeds may have the pattern and still be registered.

Does Merle Color Cause Health Problems?

Dogs who have only a single copy of the merle gene rarely suffer from deafness and blindness, but the double merles (those with two copies of the gene) are at a greater risk of deafness, total blindness, and other eye issues due to a lack of skin pigment.

This lack of skin pigment can also put them at a high risk of skin cancer or sun burns.

If your merle puppy’s parents weren’t genetically tested before breeding, it’s cause for concern. Not because we think deaf or blind dogs aren’t awesome, but because eye and skin issues can be painful for your pooch and expensive for you to treat in the long run.

Is It OK to Buy a Merle Pit Bull?

It’s up to you to decide how you’d like to spend your money. Buying or adopting a dog is a huge decision, and you should make it with you and your future pup’s best interests in mind.

If you want a merle pit bull and have found a breeder who has run genetic testing to ensure he won’t suffer health problems, then go for it.

However, if you want to register your American pit bull terrier with a breed registry later on, we’d keep looking since merle is a UKC disqualifier. The choice is yours to make.

The merle gene in pit bulls doesn’t seem to have any worse adverse effects than in other merle breeds, like Australian shepherds or collies. The problems come from breeders knowingly ignoring the standard, which leaves the door open for other things to possibly be ignored, too, and perhaps not in the best interest of the animal.

How Much Are Merle Pit Bulls? Are They Expensive?

Here’s the thing, when someone is selling a dog as “rare” or “unique” as the merle pit bull, they’re most likely going to stick a hefty price tag on each puppy. Often, these price tags will be twice as high as other puppies, sometimes stretching well beyond $1000.

Unfortunately, buying an expensive dog doesn’t guarantee that you’ll get a puppy of sound physical and mental health. This is further complicated because the puppies aren’t registered, since merle pit bulls are forbidden by the UKC breed standard.

You absolutely want to make sure a merle puppy’s parents were genetically tested before breeding to avoid the double-merle we mentioned earlier, and look into other testing performed, such as orthopedic, cardiac, and hearing.

Do you have a merle pit bull at home? What do you think about the coat pattern? Let us know in the comments. 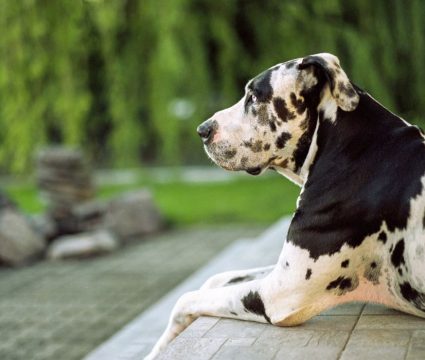 Would a merle American bully puppy with a non-merle mother be a high risk for complications? And do all Merle’s have issues being in the sun?

Without knowing the genetics of the non-merle mother, it can still be a risk and isn’t advised. Non-merle appearing dogs can still be a carrier of the merle gene. These are known as cryptic or phantom merles. A few companies offer testing for the merle gene at a reasonable cost to avoid these issues.

As for merles in the sun, they may have lighter patches of skin and coat that can make them more susceptible to sunburn and even skin cancer. Use precaution and limit sun exposure during high-UV hours.

I came across this article in researching differences between a ticked coat and a merle coat in dogs. I have a wonderful pit bull mix that I’m convinced is half Australian cattle dog. Because of the coat types possible with the two breeds, obviously more limited in the ACDs, the mix produces a dog with a fully or, more often, partially ticked coat well over 80% of the time, based on the hundreds of photos available on the internet.

I wonder if the dog in the photo at the top is in fact a ticked coat, and not a merle. Ticking is always on a white area, sometimes quite heavily to the point that little white shows through, as in the case of some Australian cattle dogs. Merle coats, however, will always be spots of darker color on a colored background, like all the other dogs shown in the photos above. In merle coats the spots are also very ragged on the edges. The ticked spots are more like spots, with more even edges. The ticking spots may run together to form denser color patches, but the edges will still be smoother than in a merle coat.

In dogs with partial ticking, like mine, ticking also occurs primarily on the face, muzzle, collar and legs, areas where tri-color merles are pure white.

Hey, Susan. That cutie in the photo definitely looks like a merle to me.
🙂

This is an excellent article on the difference between a merle coat and a ticked or roan coat. You might want to read it, because the first dog pictured is has a ticked coat, and is not a merle. http://musingsofabiologistanddoglover.blogspot.com/2012/03/identifying-merle.html

I got Hank, my merle, blue eyed Pitty last yr for Christmas. I took him to my vet the day we brought him home, for a puppy check up. First thing my vet did was a vision/blindness test. I was a bit confused as to why he did this ( having never owned one before). My vet told me not only is he a merle but he also has a form of albinism. He’s basically all white with patches of merle throughout. Skin is completely pink along with the whites of his eyes. The Iris of his eyes is a striking blue as well. Hank passed all the test with flying colors, thankfully. We did have him neutered and not breading him because of his anomalies. I take great care when he’s out in the sun (dog-sunscreen) and make sure he sees his vet on a regular basis. Checking his eyes and skin for any damages do to his unique condition. With all that said and the life lesson I learned with Hank, he by far the best boy ever. Smart, loving and great with other people, including children. His best friend is a cat, not much older than him. They actually play fetch together. I wish there was a way to upload a picture of Hank. You would fall in love with this sweet guy with just one look. Also let it be noted, I am a very experienced large dog (breads) owner, including wolf hybrids. I DO NOT recommend just anyone owning a large bread dog, based on unique qualities. Especially Pitties! They are very high energy! Requiring loads of exercise, attention, challenges, love and understanding. Add that to his (Hanks) unique conditions, pups like this see the vet often. I hope you enjoyed my bio on Hank. He truly is the best boy ever, with a great personality and loving heart. Have to go now, he’s up and ready for some playtime.

Hank sounds wonderful, Susan.
Thanks for telling us about him, and you can always submit a photo of him here!
🙂

I could not resist reading your article on the merle pit bull. I raise Shetland sheepdogs, and tho people know of the health risk of double merles they continue to breed them. I hope people will read what you have to say and stay away from breeders who practice this. Nothing against merles, I have had some. But you can not breed them to each other. Thanks for your article.

Glad you enjoyed the article, Marilynn!