Can Dogs Be Gay? Well, Yes and No… 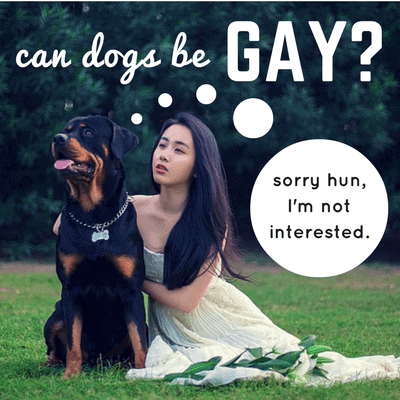 We’ve all been there – you’re at the park, or having a dinner party, and your dog starts humping someone else’s pup or one of your guests’ legs.

Knowing why your pooch is doing this can help alleviate awkward situations, help you understand your dog better, and even be a conversation starter!

We attribute a lot of human qualities to our canine friends, causing people to wonder – can my dog be gay?

Can Dogs Be Gay?

Dogs live unconstrained by internal (or external, for that matter) conflicts about their sexuality. They like what they like – no big deal.

Plenty of dogs engage with sex or sex-like behavior with members of the same sex.

But are these same-sex scenarios nothing more than hormones run wild, or do they actually represent homosexual behavior and imply that such dogs are gay?

In short, dogs can’t really be gay, simply because dogs don’t have a sexual orientation the way humans do. However, dogs can certainly exhibit gay behavior for a variety of reasons, which we’ll explain below!

Dogs do what they want, when they want, and are presumably unconstrained by the internal conflicts that often plague humans. Sometimes their sexual advances even extend to other species, as countless cats, stuffed animals and human legs can attest.

It’s important to note that while these advances – which may not even involve actual intercourse – often provide sexual or physical gratification, dogs also engage in humping behaviors for a variety of other reasons. Some dogs hump things as a form of play, while others do so when they are anxious.

Why Does My Dog Hump Other Dogs?

To humans, humping in public is considered a big no-no. So when our dogs start mounting each other in public, it can cause us to feel embarrassed and confused about why our beloved fur babies are engaging in such uncouth behavior.

For dogs, mounting can be done for a variety of reasons. While it can be sexual, dogs have their own social norms that are different than those of their human friends! Through different types of play and body language, dogs use non-verbal actions to communicate.  Here are several reasons your dog may be humping other dogs:

Given the many varied reasons that dogs hump one another, and the fundamental differences between the brains of humans and those of dogs, it is important to avoid drawing conclusions about their motivations – particularly when it involves such nebulous concepts as sexual identity. 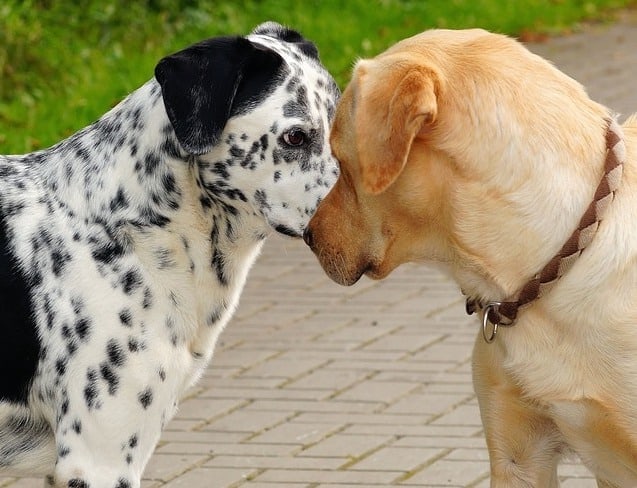 Speculating about the motivations of dogs usually involves anthropomorphic thinking, a term used to describe the attribution of human emotions to a non-human entity. For example, “the stop sign is angry.” This is an understandable tendency, but one researchers try to avoid. Dogs experience a completely different reality than we do, and we’re wise to draw conclusions about motivations carefully.

Females sometimes assume the dominant role when engaging in breeding-like activity with other females, and males may assume submissive roles when engaging in such activities with other males. And the gender roles are equally flexible between same-sex couples.

The only rule is, there are no rules.

Homosexuality Throughout the Animal Kingdom

Whether or not dogs and other animals possess a “sexual identity” or exhibit long-term sexual preferences, homosexual behaviors have been documented in a wide variety of animals.

Beetles, fruit flies, several species of fish and a handful of lizards have all been documented having sex with other members of the same sex. Male frogs – who don’t technically engage in intercourse anyway – often grab anything that moves when it is time to get busy. Many male frog species have even evolved a “get off me!” call for just such occasions.

But these animals rarely form long-term bonds, and tend to have short relationships with their partners. It is only by considering animals that form long-term pair bonds that we can see reasonable analogies for humans. But once again, examples of homosexual behavior abound.

Many birds exhibit homosexual behavior. Penguins are some of the most famously fabulous animals, and they have even been documented raising chicks with same-sex partners. Many female albatrosses bond with other females and raise chicks together (adulterous males usually father their chicks). Dolphins are also noteworthy for engaging in sexual activity with conspecifics of either sex.

But things really get interesting when you move up to our close relatives. Macaques (medium-sized primates native to Asia) often exhibit lesbian tendencies, and bonobo chimps (our closest living relatives) take sexual freedom to a whole other level.

Bonobos engage in virtually every type of sexual behavior imaginable, and they do so with other bonobos of either sex. Multiple individuals may even be involved at times. Most scientists suspect that their free-love-lifestyle probably works to help lubricate social interactions. 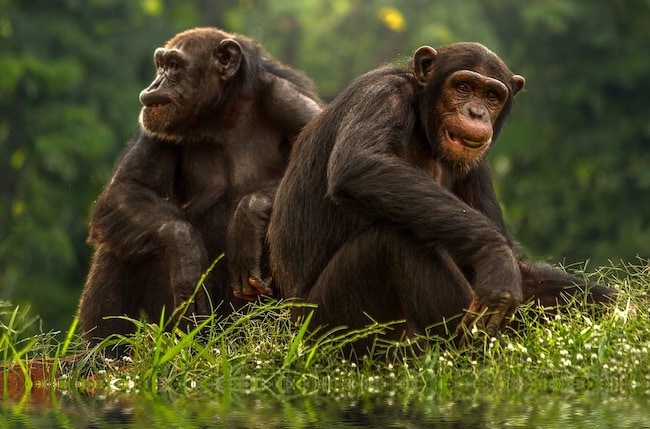 Defining the Term “Gay” for Non-Humans

Just because an animal exhibits homosexual activity does not mean it is a homosexual. Many humans engage in sex with the opposite sex, despite having a preference for individuals of the same sex, and vice versa.

We obviously can’t communicate with dogs well enough to illuminate such topics, so it is difficult to distinguish between an animal that has a long-term preference for same-sex individuals, versus a heterosexual animal that engages in a homosexual activity.

One litmus test researchers have devised seeks to distinguish between the two possibilities by noting whether or not the homosexual animal in question will still breed with a member of the opposite sex when it is likely to lead to offspring.

If, for example, a presumed “gay” male dog will still breed with a female dog in heat, he probably doesn’t have a truly homosexual identity; he just engages in homosexual behavior (such animals could probably be identified as bisexual). Most animals to which this question has been applied turnout to be exhibiting homosexual behavior – meaning that while they may enjoy a romp in the hay with another male dog, they’ll rarely pass up the chance to breed with a female.

The one exception (aside from humans) occurs right on Old Macdonald’s Farm. About 6% of male sheep court and breed other males, and refrain from breeding receptive females.

Interestingly, researchers have noted that these sheep have a smaller hypothalamus than their heterosexually oriented counterparts. This is consistent with other research, which has documented the same phenomenon in human men.

Does It Matter If Your Dog Is Gay?

In a word, no. Not even a tiny little bit.

Dogs that exhibit same-sex attraction live long, happy, healthy lives, just like their heterosexually oriented counterparts. Aside from the tiny sliver of their life that is devoted to sex and attraction, they’re no different than any other dog. They want to sleep on the couch, eat everything in the house and catch that squirrel living in the tree outside.

Your dog doesn’t know whether he is straight or gay; nor does have any idea that sexual orientation is a thing. He just knows he feels warm fuzzy feelings for other male dogs (or the reverse, in the case of females).

Any distress the situation causes is due to your baggage, not his.

Homosexuality doesn’t even prevent your dog from successfully reproducing, if that is something you have planned. Veterinarians can collect sperm manually and inseminate females, just as doctors do for infertile human couples.

Just forget about it (or celebrate it) and move on. Your dog doesn’t care if you have penchant for buxom beauties or tall-dark-and-handsome dudes – why should you care if he is partial to devilishly handsome collies?

We don’t even understand human sexuality very well. Trying to understand the sexuality of our dogs is probably impossible. And even if it weren’t, there are better subjects for us to spend our time researching. Our dogs do not care what their sexual orientation is, and we should probably follow their lead.

What about you? Have you ever suspected that your pup was gay? We’d love to hear all about it in the comments below. 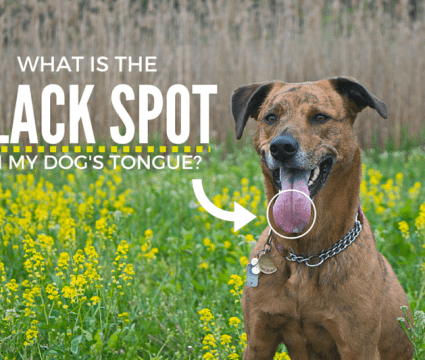 What is the Black Spot on my Dog’s Tongue?

My boyfriends male mystery mutt chihuahua who is pretty old mind you ,about 10 years or so who is not neutered and wants ABSOLUTELY nothing to do with female dogs or cats is always trying to get it on with a boy dog even our male cat Doug. Whenever my boyfriends mom comes over with her dog who is also a male chihuahua mix is always getting hounded my his dog and whenever they leave he licks the floor where he sat and has even peed there before I came to this article for maybe a bit of an understanding as too what was going on but all it says is yes and no to every question which is a bit frustrating but hopefully this comment will help anyone else who has maybe experienced this with their gay dog lol .

Hey, Desiree.
It’s a complicated issue, hence our “yes and no” answers.
Thanks for checking out the site!

Jesus, you couldn’t just summarize this in a single paragraph with a clear answer…

Sorry, Mathieu, but some questions have complicated answers.
Thanks for checking out the site, though!

Not sure what the big deal is when humans hump in public?

So, my 7 year old mystery mutt Ziggy just got caught trying to slip it into my mini-snorkie puppy Hopper’s exit hole. Not just mounting and humping, his wiener was out of the pocket and he was trying to line up for the goal. I was shocked because Ziggy was neutered when he was less than 6 months old and has never even humped a leg or stuffed animal. I’ve noticed them licking each others butt holes but I figured this was no big deal, they are dogs. But now I’m worried about leaving them alone together because I don’t want Hopper to get raped. If Ziggy did manage to get it in when im not around could that cause any damage to Hopper’s booty?

Hey, Sarah. That’s quite a tale!

I would recommend keeping them separated if you think that your dogs’ safety is in doubt. Without getting graphic, it probably would be possible for the recipient to suffer a pretty serious injury this way (injuries aren’t unheard of for male-female pairs, so it stands to reason…).

so can dogs be gay or not

thank you so much!