How Long Does A Female Dog Stay In Heat?

If you’re a first time owner of a female dog, the process of estrus, or heat, could come as surprise. However, with this helpful guide, you’ll learn what to expect when your dog reaches heat, how long it will last, and what you can do to prevent it.

When Does a Female Dog Begin to Go Into Heat?

A female canine begins going into heat (the reproductive cycle in which she begins to seek a mate) when she hits puberty, usually between six months and two years of age. Smaller breeds tend to go into heat sooner than larger breeds, so there is some variation between dogs.

If you’re looking to breed your dog, you should always wait until your dog is in their 3rd heat, usually between the ages of 18-24 months. A veterinarian can help you decide when your dog is ready to mate.

How Often Does A Female Dog Go Into Heat?

Dogs usually only go into heat twice a year, or every six months. Just as how dogs reach puberty at different ages, a dog’s heat cycles can also vary depending on your dog’s size and breed.

Just like people, dogs can also have irregular cycles, especially when first reaching puberty. It can take a female dog up to 2 years to develop a regular heat cycle.

How Long Does A Female Dog Stay In Heat?

While dogs only go into heat twice a year, they stay in heat for approximately 18 days per cycle, although it varies by breed.

How Do I Know My Dog Is In Heat?

During this time, the dog will enter a hormonal shift with increased levels of estrogen. She will display signs of being in heat, such as:

How Do I Stop My Dog From Going Into Heat?

The only way to prevent your female dog from going into heat and having accidental pregnancies is to have them spayed, a surgery that removes the ovaries and uterus. There are other options for dog birth control, but spaying is the most common and usually the most recommended method.

Additionally, spaying prevents uterine infections and ovarian and uterine cancer. A dog can be spayed as early as two months of age, but you should consult your veterinarian to see when it’s best for your pet.

If your dog is not spayed and you begin to notice her displaying the above behavior, what should you expect while she’s in heat? We’ll discuss the several stages of dog heat next.

There are several different stages of dog heat, each with its own challenges and obstacles. Preparing for each stage will help you and your dog go through the process smoothly.

Many owners wonder – how long does a female dog stay in heat (and what days is the dog fertile)? Your dog isn’t fertile the first few days of heat, which is referred to as Proestrus.

Although your dog isn’t fertile during Proestrus, and likely won’t be receptive to mating, it’s important to remember that male sperm can live inside her for several days.

This first stage of heat will be marked by a swollen vulva and discharge (usually red in color – she’ll also spend a lot of time licking herself). When your dog is having her period, the blood can get on her coat and on your furniture, carpet, etc. The amount of blood that a dog discharges can vary, with some dogs bleeding a lot, and other just a little. Many owners choose to put dog-friendly diapers or canine period panties on their dogs at this time.

The second stage, Estrus, typically lasts from five to fourteen days. Estrus is the stage when your dog becomes fertile. Estrus is also when you’ll notice your dog’s discharge become lighter and straw colored.

This is the stage where you need to be vigilante because male dogs, or sires, can smell a female’s heat cycle and may attempt to approach her to mate. During this stage, she would accept intercourse with another dog (while she may have previously guarded herself against suitors).

Do not go near a strange male dog that is approaching her – they’re more aggressive and likely to bite when they want to mate. Wait for them to leave your yard before taking your female dog outside.

Also, keep in mind that your dog can get very creative when she’s in heat; there are even accounts of females mating and becoming impregnated through a chain link fence. Always watch her and avoid walks during this time (as to not give her a chance to find a suitor).

The third stage of heat is called Diestrus, which lasts for about 2 months. The female is no longer fertile at this time, but she still may be approached by male dogs because of her scent, so take care to make sure she’s done bleeding before taking her on a walk or to the park.

The final stage is the Anestrus, where your female dog will appear normal and return to her regular behavior. This is the period lasting between Diestrus and the next Proestrus. This stage lasts around 4 months, or until her next cycle. This time period can vary a lot between breeds, so pay attention to symptoms and signs to better understand your dog’s individual heat cycle.

This video, breeding expert Jamie Crittall explains a bit more about your dog’s heat cycle and what to expect.

When Does My Dog Stop Entering Heat?

While a dog never really stops entering heat cycles, she’ll be less fertile the older she gets. (Even an older dog can get pregnant, though).

If you desire to breed your dog, have her evaluated by a veterinarian, make sure you’re willing to go through the necessary work of breeding, and wait three heat cycles (or eighteen months). If you don’t want to breed, consider spaying and the health benefits it provides.

Regardless of what you choose, though, pay attention to her heat cycles and choose the best option for you and your family. 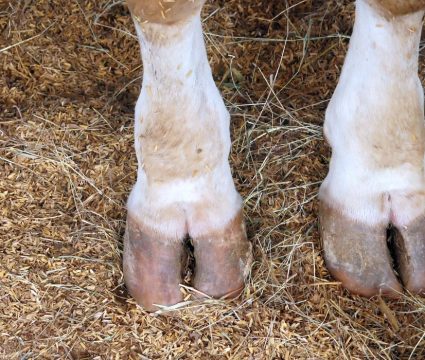 I have a GSD 13 months and am afraid of unwanted pregnancy.
All these writing ain’t enough, people need photos.

My yorkie oils 14 months shes house trained and peeper pad trained. But this is 2nd heat shes peeing on my bed n soda. 3x. I made appt. To get her spade but she went into heat. Urinates more often. I have another female 2 spade, never had this problem.