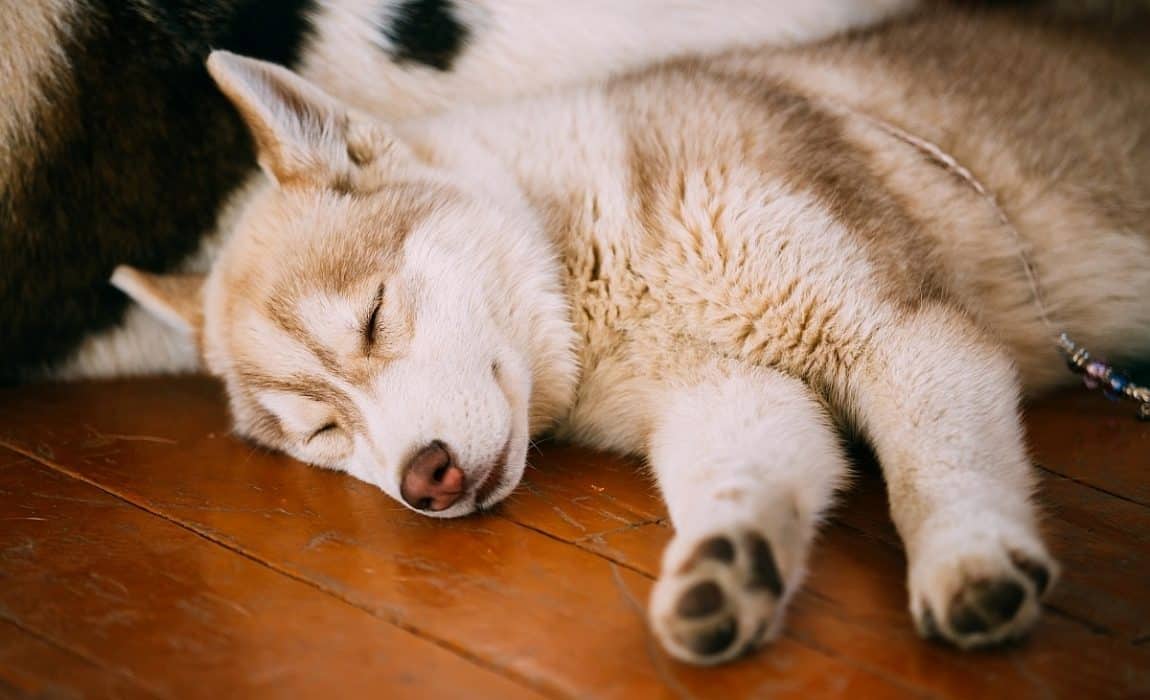 Dogs do a lot of funny things in their sleep.

My Rottie usually sleeps on her back in a way that always reminds me of Hobbes.

She jerks around a bunch, wiggles her legs from time to time and vocalizes a bit too. But fortunately, she remains pretty stationary when doing so.

However, a handful of dogs take things further. Their leg twitches may progress to an outright gallop, and they may even pace around a little bit in a semi-coherent state. This leads many owners to wonder if their dog is sleepwalking. But is that even possible? Do dogs sleepwalk?

As it turns out, the truth is a bit complicated, as it is obviously impossible to know exactly what’s going on inside your dog’s head. But we’ll summarize the current thinking on the topic and try to help you better understand these strange behaviors below.

What Is Sleepwalking, Exactly?

Everyone knows what sleepwalking is, but for clarity’s sake, a definition is in order. According to the National Sleep Foundation, sleepwalking is a behavioral disorder that “originates during deep sleep and results in walking or performing other complex behaviors while asleep.”

Importantly, it involves more than just walking – it involves a variety of complicated processes; walking is simply the most obvious.

In humans, it is thought to occur in 1% to 15% of the population, and it typically isn’t associated with underlying medical or psychological problems.

Sleepwalking is very common in children between 3 and 7 years of age, particularly in those who suffer from sleep apnea or bedwetting. There may be a genetic component to the behavior, as it tends to occur along familial lines.

Sleepwalking most commonly occurs during deep sleep cycles, although it can also occur during non-REM cycles, which is a dreamless portion of sleep.

Obviously, most of what we know about sleepwalking and everything we know about dreaming comes from human subjects. Because they’re not terribly articulate (to say the least), dogs make poor research subjects – we’ll never know exactly what they’re thinking. 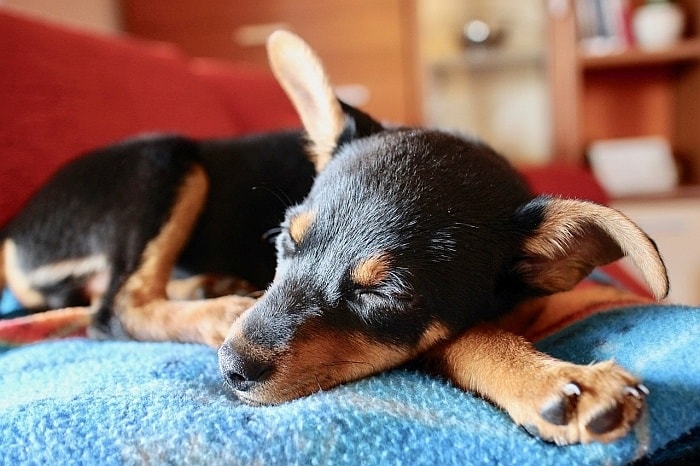 Slightly more satisfying answer: They sure seem to, and there’s a significant amount of evidence that supports this contention.

Until dogs develop language skills and begin keeping dream journals, we’ll never know if they experience dreams. Even if they do, we don’t know that they’re similar to the dreams of humans.

Humans are visual creatures and our dreams are largely visual affairs, but dogs largely experience the world through their noses – does that mean their dreams are comprised of various smells? What would a dog nightmare be like? What kind of unholy smell would frighten a dog?

Dogs certainly exhibit signs that are consistent with dreaming, including movements and vocalizations, among others. They also experience the same kinds of changing electrical patterns that characterize different sleep states in humans – including the REM (Rapid Eye Movement) phase, in which most dreaming occurs.

Scientists have documented some pretty compelling evidence that rats dream. They even appear to dream about the events of their day, like humans do. When scientists mapped the brain function and activity of rats completing a maze, they noted that the rats exhibited similar electrical activity during REM sleep. This suggests they were remembering their experience in the maze from earlier in the day.

Additionally, scientists have carried out experiments that involved disconnecting the pons – a part of the brain that prevents humans and, presumably, other animals from acting out their dreams – from the rest of the animal’s brain.

Sure enough, these animals started acting out various behaviors, such as walking, running and sniffing for food. However, their brain’s electrical activity remained consistent with that exhibited during deep sleep.

While dogs may very well dream, they cannot sleepwalk, according to Pete Wedderburn, the resident vet for The Telegraph, since 2007. However, he acknowledges that dogs may move their legs in their sleep (as countless dog owners have observed), and they may be observed “lurching a few feet before flopping to the ground.”

But this is not what most people think of as sleepwalking. In fact, dogs that are observed exhibiting classic sleepwalking-like behavior are potentially suffering from a neurological, sleep or cognitive disorder. If you witness this kind of behavior in your dog, veterinary assessment should be sought as soon as possible.

The video above became quite a viral sensation a few years back, as it appears to show a dog sleepwalking. However, this is likely a misinterpretation of his behavior. The dog in the video – Bizkit (who, I’m guessing did it all for a cookie?) probably woke suddenly from a dream, which caused him to hit the ground running – so to speak.

This is another example of a dog that appears to be “sleepwalking.” I can’t track down any information about the video, but for my money, this looks like a seizure disorder. Let us know if you have any further information about this particular video so we can reach out to the owner and find out if a veterinarian was ever consulted.

Things That May Be Confused with Sleepwalking

Because dogs do not appear to actually sleepwalk, most sleepwalking-like behaviors are likely the result of medical problems, sleep disorders, and other conditions. Some of the most likely causes include:

If your dog’s brain and nervous system don’t operate as they should, a variety of strange behaviors can result. Some neurological disorders, such as seizures, can make a dog appear like he is sleepwalking, even though he is completely awake. They can also make him do things like pace in circles, press his head against the wall or vocalize for no apparent reason.

Because several neurological conditions can be detrimental to your dog’s health (and some can prove fatal without treatment), you’ll want to have your dog checked out ASAP if he exhibits these types of strange behaviors.

This doesn’t mean that you have to call your vet every time your dog does something weird – I’d never get off the phone. But, if you see a pattern of strange behaviors develop, or they occur regularly, it is wise to see what your vet has to say about the issue.

Research into animal sleep disorders is pretty nascent, but it appears that dogs can suffer from some of the same types of sleep disorders that humans can. This includes things like sleep apnea – a condition in which breathing temporarily stops for short periods of time – and bedwetting.

Some dogs can also suffer from insomnia and narcolepsy. Both of these conditions can cause extreme drowsiness during the day, and they can trigger unusual sleep phase patterns. The end result is that your dog can appear asleep, while really being awake – which could obviously cause you to mistake his movements for sleepwalking.

You’ll need to have your dog evaluated by a veterinarian (preferably one who specializes in sleep disorders) if you suspect he has this type of problem.

Some of these disorders can be dangerous – you don’t want to let your narcoleptic dog run around unattended by the pool, for example. And a few disorders, such as canine sleep apnea, can lead to sudden death. 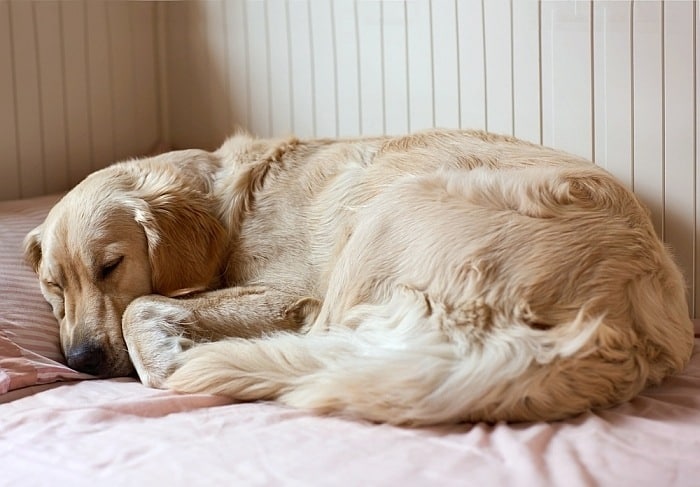 Unfortunately, some dogs will experience cognitive decline as they age. This can cause them to wander about aimlessly, act confused or behave in strange ways. Sometimes, owners interpret such behaviors as sleepwalking – particularly when they occur during the night.

There isn’t much that can be done to slow or stop this kind of mental decline, and it appears to be part of the aging process for some dogs. Instead, you’ll simply have to come to terms with your dog’s new reality and do what you can to help prevent him from injuring himself or wandering off.

It is still important to visit your veterinarian to ensure that your dog’s advanced age is responsible for the strange behaviors and not some other medical issue – you don’t want to ignore a problem that could be fixed.

What Should You Do If Your Dog Does Strange Things in His Sleep?

There are a few things you should probably do to keep your pup safe while he sleeps, and there are also things that may help him get through the night more peacefully. Some of the best steps to take include:

Sleepwalking doesn’t appear to be something dogs do, but they certainly do a bunch of strange things while getting their beauty sleep. Tell us about the weird things your dog does in his sleep below! 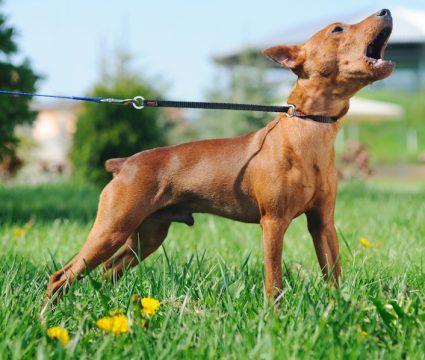 What Do Different Dog Barks Mean?

My dog wakes up at 5 am yelping like she’s physically hurting and wandering aimlessly. She doesn’t respond if I call her. She has had an obvious seizure before, when she would wake up and recognize she was alone and would get up too fast. She has separation anxiety and needs to know where her owners are 24-7. Maybe she’s having a less obvious seizure when she wanders and yelps, but it only happens when she wakes up and the yelping involves 3 to 8 yelps. Then she stops and is normal again. We believe she has some serious mental issues as well. We rescued her from the shelter and have no history on her.

Hey there, Mayra.
That definitely sounds like something strange is going on with your pooch. We can’t offer much guidance from afar, but we would recommend having your vet check her out as a good first step.
From there, you may want to reach out to a certified dog behavior consultant and see if he or she can offer any helpful advice.
Best of luck!

My 10 yr old lab starting having episodes of walking around the house lost and bumping into things and walls and a couple times peeing while she walked. Always in the morning, usually after an active day. Was eating purina dog chow but after switching to purina one vibrant maturity age 7+ the episodes stopped. Problem now is she doesnt like the new food and seems depressed all the time. Open to suggestions!

Hey, Carrie.
It’s tough to say what’s going on with your pooch. We’d recommend discussing it with your vet and going from there.
It seems unlikely that a food change would put an end to possible sleepwalking (if that is indeed what was happening).
But, if you check out our article about picky eaters, you can see a few helpful tips at the bottom, which may be helpful for getting her to accept the Purina One.
Best of luck!

My Chiweenie will do this sometimes, he will drag his hind legs and scream and if you go to calm him with touch it’s like he’s in pain, the first time I didn’t know what to do I ask my vet and he could have had a nightmare of something in his past. I still do n’t know

My dog wakes up at least once a night. Sometimes she pees in the hall and she walks around like she is lost. She bumps into doors and walls and can’t jump back in bed without me picking her up. She is only 7 months old.