Canine Bloat and GDV: Everything You Need to Know about These Dog Emergencies 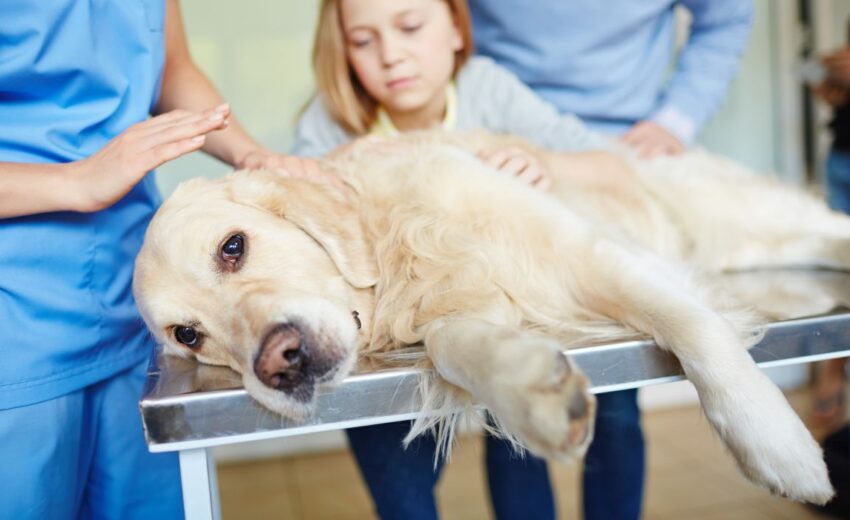 Few canine medical maladies are as serious as bloat and GDV (gastric dilatation and volvulus). Both conditions are very serious and can prove fatal if left untreated.

Accordingly, all dog owners must learn to recognize the symptoms of canine bloat and GDV, especially those with at-risk breeds.

Below, we’ll explain what canine bloat and GDV are and the differences between the two. We’ll also discuss their causes and how they’re treated.

What Is Canine Bloat and Gastric Dilation-Volvulus (GDV)? What Is the Difference Between the Two?

Bloat is a condition in which a dog’s stomach expands, most commonly due to swallowed air. This can be very painful for your dog and lead to considerable anxiety — bordering on panic.

Gastric dilatation and volvulus occurs when a dog’s stomach bloats and twists on its axis. This can cause even worse pain for the afflicted pooch, and as the condition progresses, the blood supply to the stomach and other vital organs may be cut off.

If not treated promptly, GDV almost always leads to shock and eventually death. Accordingly, immediate veterinary intervention is needed for the best chance of a positive outcome.

What Are the Causes of Canine Bloat and GDV?

Shockingly, despite its prevalence, canine bloat and GDV remain somewhat mysterious to veterinarians.

For example, vets don’t know for certain which starts first: the stomach swelling or the twisting. It also isn’t understood what causes this freak phenomenon in every instance.

Nevertheless, some risk factors have been identified, allowing pup owners to fight back with a robust defense.

Which Dogs Are at High Risk for Canine Bloat and GDV?

Canine bloat can afflict any breed, but some are more prone to the condition than others. Usually, large, deep-chested breeds are most at risk, including:

While large and giant breeds are most commonly stricken with canine bloat, some small and medium breeds are at an elevated risk, too:

If your dog’s parents or siblings suffered from bloat at any time, your pup might also be at increased risk of bloating.

Dogs with nervous dispositions and those housed in stressful settings are also thought to be at an increased risk of bloating.

In addition, males are more likely to bloat than females, and older dogs see increased risks, too. Finally, dogs who engage in vigorous play or exercise shortly after meals are thought to be at higher risk of these conditions, as are dogs who only consume one large meal each day.

The Signs and Symptoms of Bloat and GDV in Dogs

Knowing the signs of canine bloat is essential for all dog owners, not just those with at-risk breeds.

This medical emergency can happen to any dog at any time, and it requires immediate treatment. Quickly recognizing its signs can save precious time in the event it happens to a dog in your presence.

Symptoms of canine bloat include:

Some symptoms of bloat and GDV are shared with other conditions, like poisoning, heatstroke, and foreign body obstruction. All of these are medical emergencies requiring immediate veterinary care.

What Should You Do If You Think Your Dog Has Bloat or GDV?

Time is of the essence with bloat and GDV, so contact your vet or an emergency vet and head there immediately.

Ideally, you want to go to the nearest possible vet if you can since these conditions can prove fatal within an hour or two. Restrict your dog’s movement as much as possible, and don’t allow him to eat or drink during this time, either.

How Are Dog GDV and Bloat Treated?

Your dog will need surgery to address bloat or GDV, but your veterinarian will first treat your dog’s systemic shock and work to stabilize him before surgery to ensure the best possible outcome.

Your vet may also insert a needle into your dog’s stomach to allow some of the air to escape. This will provide a little more time to get the dog prepped and into surgery.

During surgery, the stomach is deflated and, in the case of GDV, it’s returned to its natural, untwisted position. Your vet may also tack the stomach to the body wall in a specialized procedure called gastropexy. Many vets like to perform this procedure, as up to 90 percent of dogs with GDV will suffer the condition again in the future.

If any portion of the stomach is damaged during the bloating incident, it’s removed during surgery as well. Also, because the spleen depends on the same blood supply that the stomach does, it may also become damaged and require removal during surgery (don’t worry — dogs can live relatively normal lives without a spleen).

Can Bloat or GDV Be Fatal?

Sadly, bloat and GDV can both be fatal, but they can also be treated in many cases if caught fast enough.

Fatality rates vary significantly, with some dogs making it through surgery only to pass suddenly later on due to heart issues caused by the lack of blood flow.

According to at least one vet, roughly 30 percent of the dogs who show up in emergency rooms for bloat ultimately die. Of course, that’s still better than dogs fare without treatment, and almost all dogs will die of bloat without prompt medical attention, and untreated GDV is 100% fatal without surgery.

Bloat and GDV aren’t something you want to gamble with. Always take your dog to the nearest emergency vet, and remain vigilant even after he’s recovered, as dogs who bloat are at severe risk of a second case later in life.

Can Canine Bloat and GDV Be Prevented?

While neither canine bloat nor GDV can be prevented entirely, you can significantly reduce the likelihood of either occurring by implementing a few precautions, including:

If you have an at-risk breed at home or are worried about canine bloat or GDV, talk to your veterinarian about additional steps you can take to reduce his risk of both conditions. In the event that he eats a large amount of food at once or drinks a ton of water, it wouldn’t be a bad idea to call your vet, either.

Canine bloat and GDV are medical emergencies that need more attention than they get. Now that you know the basics of these conditions, spread the word to your pup parent friends. You just might save a doggo with your new knowledge someday! 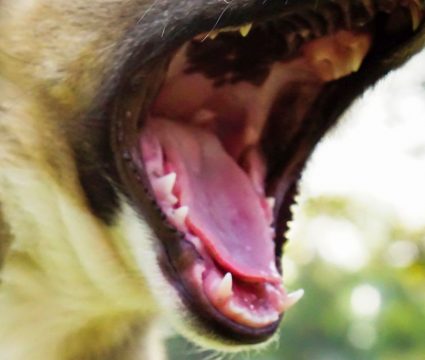 Help! My Dog Is Choking! What Do I Do?

Thank you so much for providing real video from a vet! I hope we never encounter bloat. I feel 1000% better now that I know another sign to look for (big tummy) and not just waiting to hear retching sounds!

Glad you found the article and video helpful, Anna!
🙂