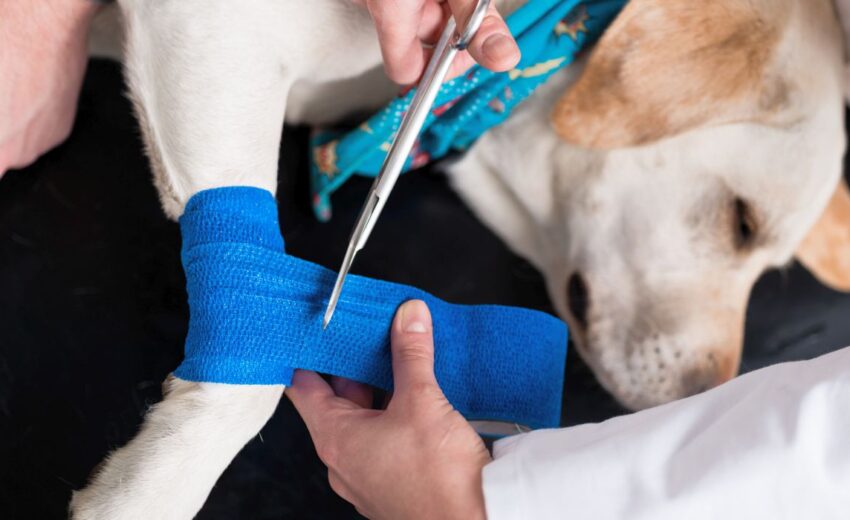 This complex injury has a long recovery window and treatments, including surgeries, can have steep costs. Luckily, things have changed over the years thanks to technology, allowing veterinarians to repair ACL injuries in new, innovative (and sometimes less expensive) ways.

Below, we’ll explain the basics of ACL surgery in dogs, break down some alternative treatment plans, and share some of the signs your dog’s ACL may be injured. We’ll also discuss the cost of dog ACL surgery and the factors that affect pricing.

The Cost of ACL Surgery in Dogs: Key Takeaways

What Is an ACL in Dogs?

While sometimes mistakenly referred to as the ACL, the proper name for the ligament is the cranial cruciate ligament (CCL) when you’re talking about dogs. However, the both the ACL in humans and the CCL in dogs perform the same basic function.

Like the ACL in humans, this ligament connects your dog’s upper leg bone (femur) to his larger lower leg bone (tibia), along with the caudal cruciate ligament in the knee joint. The two ligaments cross over one another and allow the knee to function properly as a joint.

Essentially, the ligament prevents your dog’s knee from moving too far forward or backward.

How Does an ACL Injury Happen?

Because it’s held in place by ligaments, your dog’s knee joint is pretty susceptible to damage.

Humans typically injure an ACL playing sports, but this isn’t always the case in our four-legged friends. Some CCL injuries occur while your doggo is chasing bunnies or performing other backyard Olympics with sharp twists and turns, but others happen over time.

How I (Think) My Dog Tore His ACL

Megan here! My own dog Remy now needs a double ACL surgery – due at least in part to some flirt pole play, along with the likelihood of a genetic predisposition.

I’ve actually written an entire guide to my journey treating my own dog’s ACL injury, from diagnosis to surgery and recovery. Make sure to check it out if you’re considering ACL surgery for your dog!

It’s hard to say for sure, but it seems Remy’s initial tear happened when some of my friends were playing flirt pole with a bit too much intensity and flicking the flirt pole too high in the air, causing Remy his initial leg injury which only worsened from there.

This gradual breakdown of the ligament can occur because of repeated injuries or degeneration. What may start as a minor tear or hyperextension can lead to a complete rupture over time.

All dogs can suffer from CCL injuries, but some pooches are more prone to knee problems than others. Large and giant breeds are frequently affected, as are obese dogs. Certain breeds are more at risk, too, including Staffordshire bull terriers, Rottweilers, Labrador retrievers, and Akitas.

Can I Prevent an ACL Injury?

As with any injury, you can’t completely prevent a CCL rupture or tear in your dog. Accidents happen, and unfortunately, CCL injuries are one of the most common rear leg injuries.

However, you can help your dog ward off unnecessary strain on his joints and ligaments in a few ways, including:

Symptoms of ACL/CCL Problems in Dogs

Leg injuries in dogs tend to share a lot of signs, making a proper diagnosis a must to determine the origin before more damage can occur.

Since the CCL is found in the rear legs, you will notice issues there, rather than in the front legs. This should help you rule out the possibility of a CCL injury in some cases (though your pooch may still need veterinary attention).

The main symptoms of a CCL injury are:

If you notice any of these, contact your veterinarian as soon as possible.

How Much Does ACL (CCL) Surgery Cost for Dogs?

Unfortunately, the cost for dog ACL surgery can be high, varying between $750 and $5000 per knee, depending on the specific procedure employed and your dog’s size and condition.

It’s important to note that overall costs will likely be even higher due to the necessary diagnostics and postoperative care. While these figures are certainly up there, these prices may be comparable to alternative treatments over time, too — long term medication regimens often add up.

The four most common CCL surgeries are:

This surgical procedure replaces the damaged CCL with a manmade ligament positioned outside of the joint rather than inside it.

Made of monofilament, this fake ligament stabilizes the knee and functions as your pup’s natural CCL would, though the range of motion is typically inhibited to a degree.

Eventually, the fake ligament will wear down or snap, but the fibrous tissue that develops over time helps support the knee in its absence.

The lateral suture technique is best suited for dogs weighing less than 40 pounds. Large or very active dogs aren’t good candidates for this procedure, as they risk prematurely breaking the fake ligament.

In this procedure, your veterinary surgeon will drill four holes in your dog’s tibia and femur and then stabilize the joint by lacing in together with a synthetic ligament.

This new ligament functions like your dog’s CCL once did. Overall, it is far less invasive than other CCL surgeries.

Additionally, the TightRope® Technique only costs about half as much as some other procedures. It typically runs between $750 and $1500 per knee.

The TightRope® Technique is an option for most small and medium-sized breeds. If you have a large breed or very active dog, your vet may steer you toward TPLO or TTA, depending on your pup’s injury and lifestyle.

This also isn’t an option for dogs who’ve previously experienced a CCL injury.

TPLO surgery skips the need for a CCL entirely by cutting and rotating the tibia, creating a sliding motion between it and the femur. An artificial bone plate is then screwed into place along the two to stabilize the new joint.

TPLO is most commonly used on large or giant breed dogs. It’s also the surgery of choice for obese dogs, athletes, and those who have torn or damaged both CCLs.

Unfortunately, TPLO is also one of the most expensive CCL surgeries, costing between $2500 and $6000.

Like TPLO, TTA eliminates the CCL by cutting and reconfiguring the front of the tibia. An artificial spacer is then inserted to relocate the patellar ligament, aiding in proper joint movement. Lastly, a stabilizing bone plate is installed to keep the tibia in its new position.

TTA is best for larger or more athletic dogs. It may be suggested by your veterinary surgeon over TPLO because of the shape of your dog’s tibia, too. TTA is pricey, ranging from $3000 to $6000.

Which surgery your dog receives varies by his condition, as some dogs are better candidates for some procedures than others. Your veterinarian will discuss treatment options with you and develop a plan that works best for everyone.

Why Is ACL (CCL) Surgery Necessary?

Not only do these injuries cause pain and mobility issues, but they also destabilize the knee. This destabilization can lead to further injuries and joint breakdown over time, too, including additional ligament tears, menisci damage, and arthritis.

The end result is that your dog will likely struggle with daily activities, such as walking, running, or sitting.

With a CCL injury, your dog will put more pressure on his other knee to compensate, putting him at risk of a tear in that leg. Sadly, more than half of dogs who experience a CCL tear will later experience one in their other knee — often about 6 months later.

Postoperative care following ACL/CCL surgery is definitely not a walk in the park.

Immediately after surgery, your pooch will be outfitted with an e-collar or inflatable neck donut to keep him from licking his stitches. He may spend the night at the vet’s for observation, or he may be released shortly after the surgery, depending on his condition.

When he arrives home, he’ll need to spend a few weeks on crate rest, so you may want to set this up in advance with comfy bedding. His crate should only be large enough for him to stand up and turn around—nothing larger. This is where he’ll spend his time other than brief walks to potty.

Your fur friend will think he’s good to run and play with his new bionic joint, but it’s important to only walk him on a short leash outside, potentially with a haunch-holder for support. At no time should he be allowed to run, jump, or climb stairs until your vet gives you the okay.

Your vet will likely send your pup patient home with painkillers and anti-inflammatories that will make him comfortable as he heals. Some surgeries require post-op physical therapy, too, performed by you, your vet, or a physical therapist.

You can help your caged canine feel less alone by spending time with him when he’s crated. Don’t be afraid to get creative with new toys or games, like “guess which hand the treat is in.” You could also let him play with relatively calm puzzle toys.

We know it’s hard but stick to your vet’s timeline and instructions. Exercising too soon can damage the knee further or cause other complications.

We know the price tag of CCL surgery can be daunting. If you have it already, pet insurance may cover a portion or all of CCL surgery costs. You can also see if your vet accepts payment plans, or you could investigate no or low-interest loans, such as those provided by CareCredit.

Crowdfunding is another option since many of us pup parents have been in your shoes before and are willing to donate some dollars to help.

Some veterinary clinics specialize in low-cost CCL surgery. While these aren’t in every state, they’re something to look for if you’re in a pinch. Sometimes, you can save a ton of money, even if you have to drive a few hours to get there.

Are There Any Alternatives to ACL/CCL Surgery?

Vets always assess CCL injuries on a case-by-case basis. Some dogs are better candidates for surgeries than others, and sometimes your vet may opt for alternatives before making the call on surgery.

Has your four-footer gone through CCL surgery, or did your vet opt for a different approach? Let us know in the comments. 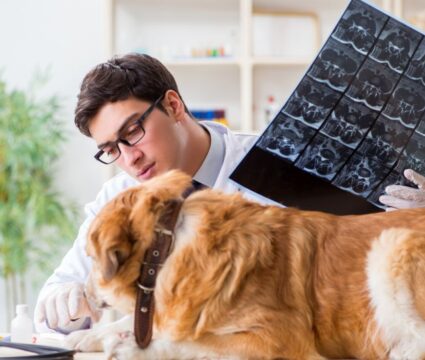 Hello,
N
Thank you very much for this article it was very informative and clarify so many things for me.
I really don’t know if the veterinarian is suggesting TTA because is more profitable for him or it is the best for my dog.
Do you think getting a sink a second opinion is worth it

Hey there, Douglas.
Ultimately, you’ll have to listen to your gut, but there aren’t many (non-emergent) cases in which it doesn’t make sense to get a second opinion.
Let us know how it goes!