Does My Dog Miss Me When I’m Gone? Many pet owners notice their dog’s excitement when they return home – whether it’s after five minutes or five hours. But do our furry pals really miss us?

Dogs and their memories are a tricky subject, but we’re digging in to find out just how much Fido thinks about you when you’re at work all day.

A Dog’s Memory: How Does Canine Memory Work?

Dogs, it would seem, have a short-term memory of around 2-5 minutes; this is according to a study by a Swedish team of scientists headed by Johan Lind.

In the study, 25 species were tested in all (“birds, mammals, and bees”), and the results showed that animals do not have a particularly impressive short-term memory, and “pigeons do not perform as well as mammals at longer delay intervals”, just in case you were wondering about that.

More studies have been conducted on animal intelligence and cognition, some with more impressive results.

One, conducted in Hungary, tested what’s called episodic memory in 17 dogs: Owners were told to interact with items, and the dogs were given the command “Do It!”, to which they were supposed to follow their owner’s interaction with the objects. In-between, dogs were given a time-delay of between a minute to an hour.

You can also toss everything you ever thought about the memory of goldfish: Research into goldfish has shown that their memories can last for at least five months. It knows what you did, and it remembers.

Do Dogs Remember How Long We’ve Been Away?

Now that we know a little more about memory – and don’t you forget it! – we can get to answering our main question. Do dogs have the memory capacity to “miss” us?

­Further studies have been done on what happens if dogs are left alone and whether or not they can tell the difference between the amount of time you’ve left them alone or not. (An old joke notes that you should lock both your partner and your dog in your trunk and see who is happiest to see you an hour later; no, don’t do that.)

One study done by Rehn & Keeling in 2011 examined vital signs like variations on a dog’s heart rate, measured throughout an owner’s absence.

The study concludes with this:

“Although this study cannot distinguish between whether dogs were aware of the length of time they were alone (but did not signal it) or whether they were unaware until reminded of it by the return of their owner, it does confirm that dogs are affected by the duration of time at home alone.”

Well, there you go: The answer is a most definite yes – your dog absolutely misses you when you are gone! More studies are still being done on just how dogs are able to remember things, and until then, there’s your answer!

While your dog probably isn’t playing Dido or replaying your greatest memories together in his head, he certainly longs for your company when you’re away, and that very real distress at your absence can certainly be categorized as “missing” you.

As your dog gets older, you may notice some strange behavior when it comes to your dog and your absence. Maybe you return home and instead of greeting you happily, your dog may growl at you as if you’re a stranger.

Or perhaps you get up from your desk where your dog is lying with you, go into the kitchen, and return to your desk only to have your dog greet you as if you’re been gone for hours!

As sad as it is to consider, senior dogs can experience symptoms which mimic Alzheimer’s disease in humans. This is known as Canine Cognitive Dysfunction (or CCD).

Just how common is CCD? According to the University of California’s Animal Behavioural Clinic, 28% of dogs ages 11 – 12 experience some form of “cognitive impairment”, and 68% of dogs ages between 15 – 16 years; could your dog be one of them?

Good news though – you can potentially improve your dog’s mental health overall by making a couple of small changes to his diet, increasing their physical activity, introducing them to new toys on a regular basis, and teaching them new commands – yes, it turns out you can and should teach an old dog new tricks. It’s for their health!

For more info on dealing with older dogs, be sure to check out our guide to a senior dog’s golden years, as well as our top picks on the best dog food to feed your senior canine.

This article on Psychology Today’s blog by Stanley Coren points out that pet owners should refer to the acronym DISH should they suspect anything is wrong with their pooch’s cognition. This refers to:

If you’ve noticed any of these symptoms in your pets, it might be time for a visit to the vet.

We also suggest learning more about CDC at DogsDementia.com and read up on dog sundowners syndrome if you suspect your dog may be suffering from canine cognitive dysfunction.

Don’t worry – it’s fairly common and you and your dog can still share great times together. You’ll just need to be on a higher state of alert and possibly may benefit from medication with your vet’s guidance.

What does your dog do when you come home? Does he greet you with a toy? Share your experience in the comments! 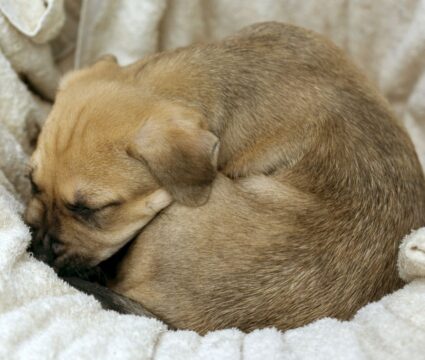 Why Do Dogs Curl Up When They Sleep?

my dog gives me her toy bc she wants to play

My rescue dog has always barked at me as if he were yelling when I got home. I’ve had him almost 3 years and he still barks, but he started chewing on the woodwork by the door. I’ve had to block the door when I leave and he can’t get to the door. I know this is separation anxiety, but why did it accelerate after all this time? Any ideas how to make him feel more secure when I leave? He’s almost 7 and perfect in every other way.

Hey, Jane. That certainly sounds frustrating.
I’ve had dogs with separation anxiety before, and it really can make you feel like a prisoner! One particularly anxious dog I had destroyed the entire linoleum floor in my kitchen.
I’d recommend checking out our complete guide to separation anxiety. There are dozens of tips and strategies there, which may prove helpful.
Thanks for reading! Let us know how it goes!