How Do Dogs Get Rabies and How Can You Protect Your Pet? 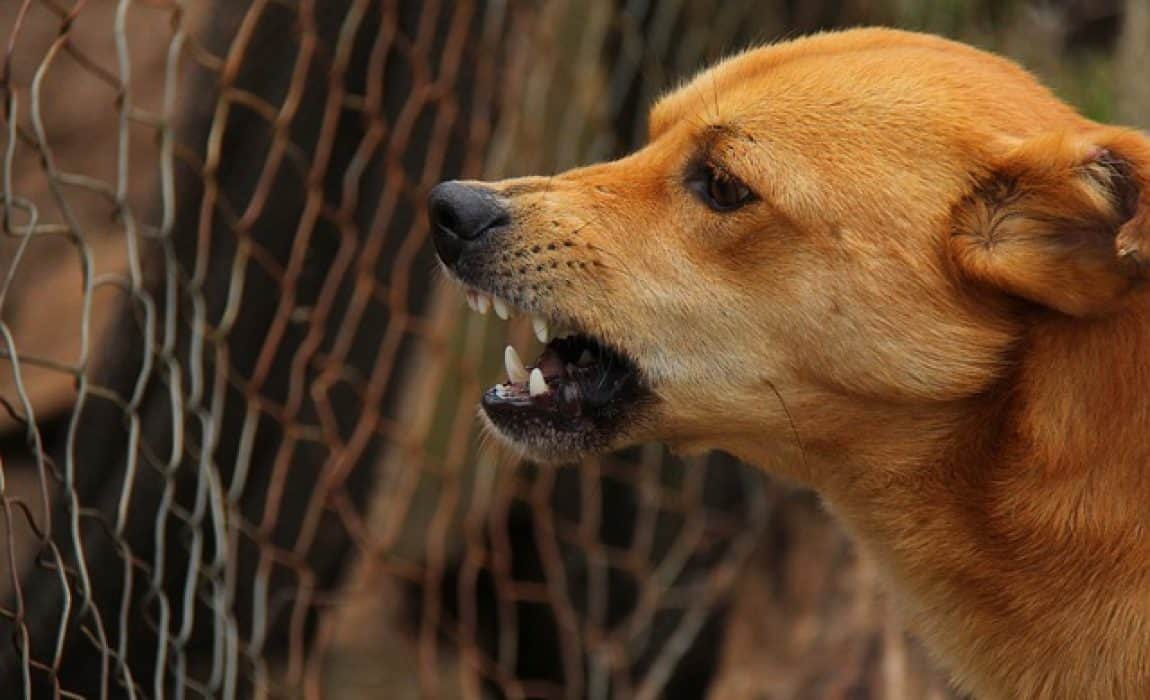 Rabies is a very frightening disease that causes plenty of concern among dog owners.

Pet parents may not only wonder how dogs get rabies, but what they can do to prevent their pet from contracting the disease too. For that matter, owners may worry about being exposed to the disease themselves.

We’ll answer these questions and explain some other important details about rabies below. Let’s jump right it!

What Is Rabies? What Causes the Disease?

Rabies is a viral disease caused by a type of RNA virus called a lyssavirus. Most cases are caused by one known simply as Rabies lyssavirus or the rabies virus. However, Australian bat lyssavirus can also cause the disease.

Once animals contract the rabies virus, it travels to the nervous system, where it begins to replicate. Soon thereafter, the disease makes its way to spinal column and ultimately the brain, where it begins triggering symptoms. Eventually, the virus will move to the infected animal’s salivary glands, where it can then be transmitted to other animals.

It is important to note that rabies is a zoonotic disease, meaning that humans can catch it from animals. So, it is not only an important topic for all humans to understand — not just dog owners.

Unfortunately, the disease is almost always fatal once the symptoms of rabies appear, thus highlighting the importance of prevention. Fortunately, rabies vaccines are readily available in most developed countries, making rabies deaths pretty easy to avoid.

How Do Dogs Get Rabies? Where Does It Come From?

Rabies is a common disease that plagues a variety of warm-blooded animals, with bats, raccoons, and skunks serving as a few of the most common carriers.

Animals infected with rabies pass it along to other animals through their saliva. Infected animals are generally only contagious once they begin displaying symptoms, but you should still have your pet examined by a vet if he’s bitten by a wild animal.

Unfortunately, once they begin displaying symptoms of rabies, dogs typically only live for about a week. However, while this is obviously sad, it does mean the dog won’t have very much time to spread the disease to others.

Common Ways For Dogs to Get Rabies

Dogs (or any domestic animal, really) can get rabies in one of two primary ways:

Though it isn’t as common, dogs may also contract rabies if the saliva from an infected animal comes into direct contact with one of the dog’s mucous membranes (such as the nose, mouth, or eyes).

How to Prevent Rabies in Dogs

Rabies is certainly scary, but fortunately, it’s pretty easy to prevent in the industrialized world.

Have your pet vaccinated.

The best way to prevent rabies is to have your pet vaccinated against the disease. All dogs (and cats) should receive the rabies vaccine, as should people who are at higher risk of contracting the virus (just speak with your doctor if you think you’re at high risk).

In many states, rabies vaccinations are required for pets, while some regions delegate that ruling to the county. Regardless, you should get your pet vaccinated for their safety and for the safety of you and others.

Different states require slightly different rabies vaccine regimens, with most recommending the first dose at around 14 weeks of age, with a follow up at 1 year of age. Just be sure that you don’t get your dog’s first rabies vaccination before he’s 12 weeks old, as it will be unlikely to prove effective.

Another way to prevent dogs from getting rabies is to keep them leashed whenever they’re not inside or in a fenced yard.

Of course, bats can certainly fly over fences and raccoons often climb over them, so your dog is still at some risk of contracting rabies, even when in your fenced backyard. But by preventing your dog from roaming wildly, you’ll drastically reduce the chances of him contracting rabies.

Keep your distance from stray dogs and wild animals.

It is also best to stay away from stray animals, feral dogs, and other wild animals. Some may seem friendly, but there is no way to tell whether or not the four-footer ambling toward you is a rabid animal or not.

In fact, because of the way rabies can alter the behavior of an infected animal, “friendliness” is often better described as a lack of fear — one of the common signs of a rabies infection. Similarly, you’ll want to be cautious around animals who’re normally nocturnal, being active during the daytime.

Coyotes certainly represent a predatory threat to small doggos, but because they can carry rabies, they can even represent a threat to bigger pooches too.

So, if you must allow your dog to walk unattended in the backyard, you’ll want to keep him as protected as is possible. And in many areas, that means using coyote deterrents and repellents.

Many of these tools will help prevent your canine from getting dog-napped by a hungry ‘yote, but they may also provide some protection from bites (and therefore rabies). Some may even cause coyotes to look elsewhere for an easier meal.

You should still have your pup vaccinated and monitor him as much as is possible, but these types of tools can offer supplemental value.

Clinical Signs and Symptoms of Rabies

While some dogs can begin displaying the clinical signs and symptoms of rabies very quickly following a bite, others may not show signs for quite a while — months or years later, in some cases.

A lot of the discrepancy in the time frame relates to the location of the bite. Those located closer to the brain typically cause symptoms to manifest more quickly than those that occur in the extremities.

Here are some symptoms of rabies:

Rabies is a serious disease that needs to be treated as such. It is important for dog owners to keep a close eye on their pets so they do not come in contact with wild animals that could carry rabies.

Dog owners should do everything in their power to prevent their dogs from getting rabies, and take them to a veterinarian right away if any symptoms are detected.

The ultimate thing to remember: Always get your dog vaccinated against rabies!

It is important to note that rabies occurs in two different forms: “Furious” rabies and “dumb” or “paralytic” rabies.

Furious rabies is what most people picture when thinking about the disease. It causes dogs to bite and become very aggressive (hence its other name: “mad-dog rabies”). These animals may also drool excessively, snap at imaginary bugs, and seem incredibly agitated.

By contrast, dumb rabies usually causes afflicted animals to exhibit no fear, and they’ll often display poor coordination. The dumb form is pretty rare in canines, but it does occur from time to time.

What to Do if Your Dog Gets Rabies

If a dog gets bit by another animal who you know or suspect is infected with rabies, he needs to be taken to the veterinarian immediately.

Your veterinarian will explain the recommended procedure (which may be mandated by your local health department), but the CDC recommends that:

Generally speaking, dogs who’ve been vaccinated (and sufficiently boosted) are very unlikely to become sick; but dogs who have not been properly vaccinated are unlikely to survive. As noted above, you should always get your dog vaccinated against rabies, since rabies infection is fatal.

It is best to put a dog with suspected rabies into a carrier or cage for transport (if it is safe to do so — you don’t want to become exposed to the virus yourself). If the dog is already acting viciously and attacking, then the owner must call animal control to have them transport the dog safely.

It is also important to disinfect all areas of the home that the dog’s saliva could have come in contact with. Failing to do so could mean spreading the infection, especially for anyone who has an open wound or even simple scratch on their bodies.

Use preventive measures to protect you and your pets from this horrific disease.

Of course, your dog isn’t the only one who has to be concerned about potential rabies exposures — you are also at risk of the contracting the disease. But as with your dog, there are things you can do to protect yourself:

There is a human vaccine for rabies. It – along with immunoglobulin medications — is typically administered (several times) to people who’ve potentially been exposed to the disease. However, it is also given prophylactically (as a preventative) to people who are at unusually high risk of exposure to the virus. This includes veterinarians, wildlife control officials, and people who live in close proximity to rabid animals.

Have you ever dealt with a rabid animal? What was your experience like? Does your dog have a current rabies vaccination? Please share your thoughts in the comments! 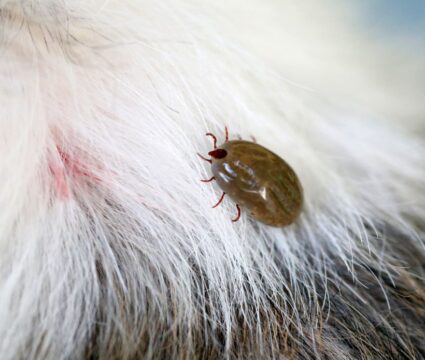