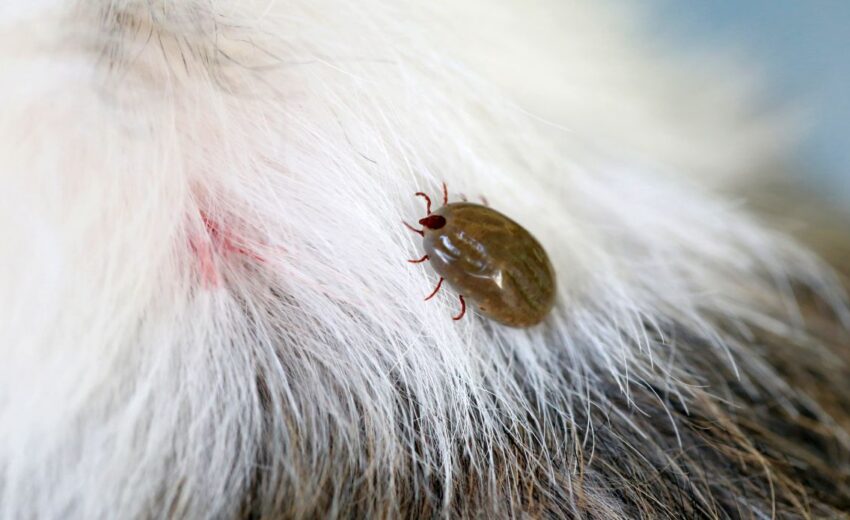 Lyme disease is a serious tick-borne illness that humans are rightfully wary of. But it can also occur in dogs, which means owners must be on guard. Thankfully, while formidable, Lyme disease is both preventable and treatable.

Below, we’ll discuss the basics of canine Lyme disease, explain how it is transmitted, outline the symptoms it causes, and share ways to prevent and treat this doggo disease.

What Is Lyme Disease and How Do Dogs Get It?

Lyme disease is an illness caused by the bacteria Borrelia burgdorferi. You may sometimes see this organism referred to as a spirochete, but that is just a technical name for spirally twisted bacteria.

Spread by tick bites, the disease travels through the bloodstream and wreaks havoc throughout the body, especially the victim’s joints and internal organs.

Borrelia burgdorferi is found in black-legged ticks, or “deer ticks” as they’re more commonly called. These arachnids are most often found in the northeastern United States, though small pockets of Lyme disease outbreaks do occur in the Midwest, Southeast, and West Coast each year.

What Are the Symptoms of Lyme Disease in Dogs?

Lyme disease is a tricky illness to diagnose, as infected dogs (and humans!) don’t always show signs right away. Symptoms may also start and stop, only to recur later in a flare-up.

Symptoms of Lyme disease can include:

If you notice any of these in your pup, contact your vet for an appointment. This is especially important if you live in a Lyme disease hotspot like the Northeast.

Need to Speak with a Vet?

Do you need some veterinary advice?

You may want to consider enrolling in Pawp — for only $24 per month, you can access to Pawp’s nationwide network of licensed veterinarians and jump on a video-call with a vet (or communicate via text, if you prefer).

These consultations are unlimited, and you’ll have access to the vets 24 hours a day, 7 days a week!

So go ahead, sign up with Pawp and talk one-on-one with a vet about your pup’s problems, all from the comfort of your home.

How Is Lyme Disease Diagnosed in Dogs?

Lyme disease is diagnosed via a blood test in which your veterinarian looks for Borrelia burgdorferi antibodies. Their presence signals an active infection.

However, unfortunately, tests don’t always detect recent infections, thereby requiring a retest later to rule out a false negative result. In fact, your vet may order a repeat test if Lyme disease is suspected.

If your dog tests positive for Lyme disease, your vet will start a treatment plan and check your pet’s kidney function through blood and urine tests. This is just to make sure your pup is in tip-top shape, so don’t panic.

What Treatments Are Available for Lyme Disease in Dogs?

Since Lyme disease is a bacterial infection, dogs who contract the illness are treated with canine antibiotics.

Typically, doxycycline is the most common medication choice, though your vet may prescribe another antibiotic in some cases. You’ll likely be able to obtain doxycycline from your vet, but you may save a bit of cash by shopping at one of the best online pet pharmacies.

These antibiotics come in pill form, so they are usually pretty easy to give to your pup. Just put the pill in some canned food or cheese, or use any of the other common hacks to get your dog to take his medicine to get the meds down the hatch. Repeat treatment may be needed if the infection doesn’t clear.

It’s important to note that antibiotic treatment doesn’t prevent future infection — your doggo could contract the disease again in the future. This means that tick prevention remains as important as ever, even if your dog has already contracted Lyme disease.

Where and When Are Dogs at Risk of Lyme Disease?

Ticks and wooded areas go hand-in-hand, but you can also find these creepy crawlies in grassy fields and, unfortunately, your backyard.

Your dog doesn’t need to romp around outside for long to pick up an unwanted bloodsucker, either. Ticks spend a lot of their time clinging to vegetation, just waiting for a potential food source to stroll by. And this means your dog may even pick up one of these hitchhiking bloodsuckers during a quick potty break.

The East Coast sees the highest prevalence of Lyme disease from northern Virginia to Maine, concentrated particularly around Connecticut (Lyme, Connecticut is where the illness got its name), Massachusetts, southeastern New York, and New Jersey.

Outbreaks are occasionally seen elsewhere in the U.S., with pockets occurring in Minnesota, Wisconsin, California, Illinois, and more.

Dogs living in the Northeast are at a much higher risk than elsewhere, but all dogs should have some form of tick preventative, as there are many other tick-borne illnesses out there.

Most people think of ticks as a “summer only” threat, and while yes, ticks are more common in the warmer months, they’re still a year-round threat that require you to be on alert. This is especially true for dogs and owners living in the South or on the West Coast.

Preventing Lyme Disease in Dogs: An Ounce of Prevention…

Lyme disease may be an icky foe, but there are ways to prevent dogs from getting ticks that carry the dangerous bacteria, including:

As with any intervention, check with your vet first to make sure you pick the best preventive for your dog and area. Some breeds, such as collies and other herding pups, are sensitive to flea and tick products, making your vet’s approval all the more important.

You should also mention if you live in a multispecies household, as some topicals and tick collars can be harmful to cats.

A Few Other Tick-Transmitted Diseases Your Dog Can Catch

Unfortunately, Lyme disease isn’t the only tick-borne dog illness out there. Those living far from the Lyme disease hotbed of the Northeast still have plenty of tick-transmitted infections to watch for, including:

Combating tick-borne illness requires a robust offense of preventatives, which is why every dog should have at least some form of protection. Remember: It’s much cheaper and safer to prevent problems than to treat them.

Kicking ticks to the curb is easier if you follow a few easy steps, such as:

If you encounter a tick on your dog, grip the tick’s head firmly with a pair of tweezers and pull it straight off without twisting, as twisting can separate the head and make complete removal more difficult.

Once removed, place the tick in a sealed container with isopropyl alcohol for preservation and mark it with the date. Store the container for a few weeks while watching your dog for any changes in behavior. This is important, as having the tick handy allows your vet to test it just in case your dog falls ill.

After removing the tick, cleanse the bite area with soap and water and apply a bit of antiseptic. Wash your hands and the tweezers thoroughly as well.

No, your dog won’t give you Lyme disease. Fortunately, it is only spread via tick bites.

That said, the tick that infected your dog can easily fall off and later bite you, causing infection. This is why frequently checking your pup for ticks is so important, and if you live in high-risk areas, you might want to skip sharing a bed with your four-footer, if possible.

Lyme disease in dogs is nothing to mess around with, but luckily there are several ways to prevent infection and treatments if your pup does fall ill with it.

Has your canine had a bout of Lyme disease? Do you have any tick prevention tips for other dog owners? Share with us in the comments! 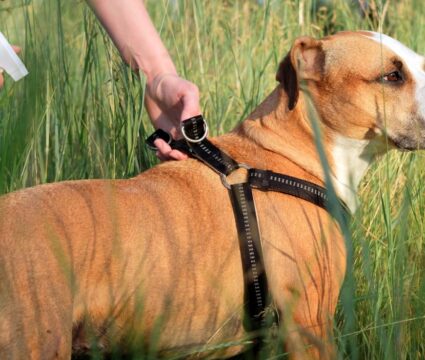