How Do Dogs Get Ringworm? 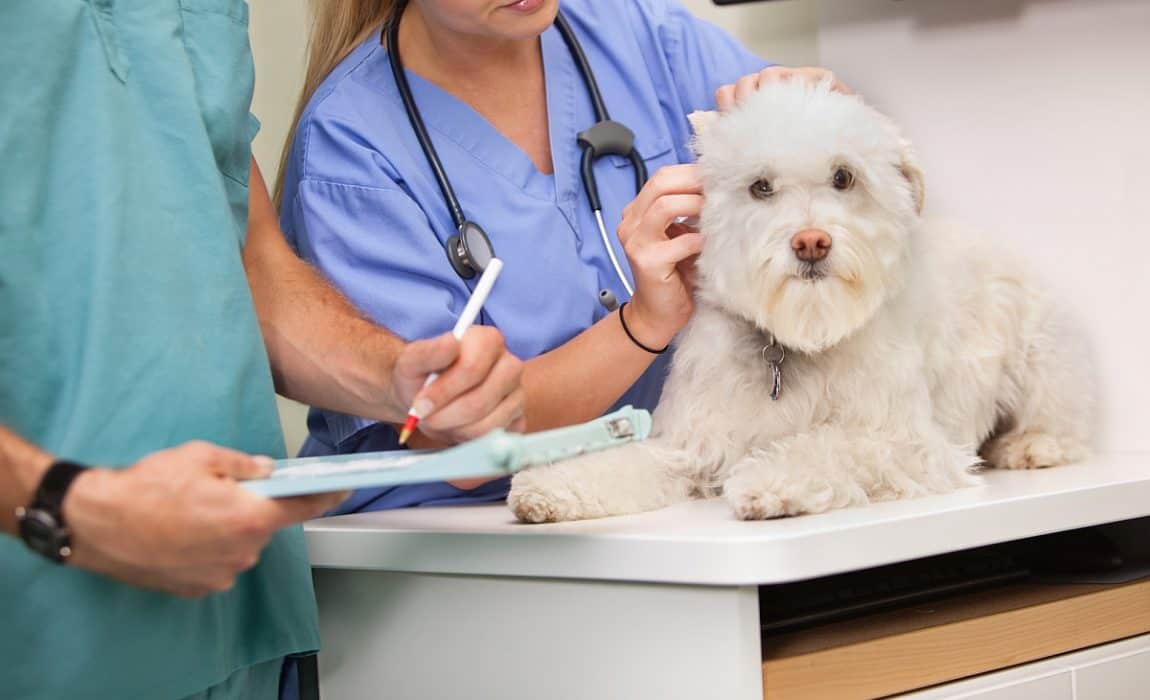 Ringworm is a fairly common ailment that afflicts dogs.

It isn’t usually a serious or life-threatening illness, but it can be quite a pain to treat, and it is quite contagious. It’s important to make sure that you know how to recognize the symptoms it causes and do everything you can to prevent your dog from catching it.

Key Takeaways: How Do Dogs Get Ringworm?

What Is Ringworm in Dogs?

Ringworm is not a worm at all; it is actually a fungal infection of the skin, hair, or claws. Known by vets as dermatophytosis, the condition is usually caused by one of three fungal species:

The offending fungus usually colonizes portions of your dog’s skin, where it feeds on the dead cells present. However, just because it is primarily a skin condition doesn’t mean it doesn’t require your attention — left untreated, ringworm can lead to additional health problems for dogs.

What Are the Signs of Ringworm in Dogs?

Ringworm infections usually cause a number of ring-shaped rashes or circular patches of missing hair. The area becomes red, itchy and inflamed, and the infected skin is often described as having a scaly appearance. Your dog may also suffer from hair loss in the area.

The offending fungus usually colonizes portions of your dog’s skin, where it feeds on the dead skin cells present. In the process, it usually causes a number of ring-shaped rashes. The area becomes red, itchy and inflamed, and the infected skin is often described as having a scaly appearance.

Most dogs afflicted by ringworm will exhibit broken hairs near the sight of the rash. Claws infected by ringworm fungi often become exceptionally brittle and prone to breakage.

Fortunately, the fungus rarely attacks living cells, and the inflammation caused by a dog’s immune system often serves as a boundary that limits the fungus’ spread. After recovering from a bout with ringworm, most dogs exhibit a short-lived immunity to the condition.

Note that the damaged skin that is associated with ringworm may be susceptible to secondary bacterial infections, which will require a different treatment – typically a topical or systemic antibiotic — than the primary problem.

Accordingly, it is imperative that you seek veterinary care if your dog exhibits any ringworm symptoms.

How Do Dogs Contract Ringworm?

Ringworm commonly develops in response to contact with the fungus or the spores they release (spores are somewhat like eggs or seeds). In practice, this normally occurs through direct contact with infected dogs, but it can also spread via indirect contact. For example, a dog may be exposed to fungal spores by sharing a bed, grooming tools, or potentially even food bowls with an infected dog.

The broken and infected hairs associated with ringworm serve as an important vector by which the fungus spreads. Being light and easily carried by a gentle breeze, these hairs can end up quite far from the site of the infection, where they can cause problems for other dogs.

How Is Ringworm Treated?

You’ll need to take your dog to the vet if you suspect he may be suffering from a ringworm infection. Your vet will begin by trying to verify that the problem is in fact ringworm. Vets can diagnose some cases by appearance alone, but they may need to use more elaborate diagnostic techniques in other cases.

For example, a Wood’s Lamp – a special ultraviolet light that causes the secretions of Microsporum canis organisms to glow yellow-green – may be used. However, Wood’s Lamps do not work for all of the fungi that can cause ringworm, and sometimes fungal secretions fail to light up during the examination, so a negative result isn’t always conclusive.

Once your vet has made a diagnosis of ringworm, he or she will likely prescribe an antifungal medication or antifungal shampoo to use on your pet.

Most mild cases resolve with a topical treatment, but serious ringworm infections may require an oral medication too. Treatment can sometimes require sustained efforts, and many cases take 6 weeks or more to resolve, even with top-notch veterinary care.

You’ll want to keep your dog sequestered during the treatment phase, to prevent him from spreading the fungus to others or the environment. Sometimes, in an effort to be proactive, vets recommend treating all of the pets in the home at the same time.

It is also important to clean your home thoroughly and repeatedly when battling a ringworm outbreak. Ringworm spores remain viable for a long time, and they may still cause infections 18 months after they are initially released.

How Can You Help Prevent Ringworm in Dogs?

Like most other illnesses, the best way to treat ringworm is to prevent your dog from catching it in the first place. Some of the best strategies for doing so include:

Keep your home clean. Your dog is constantly bringing cooties home with him, and this may include ringworm spores. Try to clean hard floors and vacuum your carpets at least once per week, and don’t forget to wash your pet’s bedding regularly too.

Bathe your dog regularly. While ringworm is really contagious, contact with spores does not necessarily mean that your dog will contract the illness – particularly if you wash them off promptly. Different dogs will require differing bath schedules, but most can be bathed once or twice a month.

Prevent contact with dogs that have suspicious-looking lesions – especially if they are circular. You don’t want to ostracize other dogs who may be suffering from a skin infection, but that doesn’t mean you need to let your dog rub up against them either. Nevertheless, you’ll always want to try to prevent your dog from having direct contact with an infected animal.

Clean out your dog’s hair brush regularly. The hairs that come off your dog during a brushing can harbor fungal spores for a long time, so you want to be sure to remove and dispose of them on a regular basis. Besides, it’s just gross to leave those hairs in there for a long time – shed dog hair is not exactly sterile.

Limit your dog’s time in kennels and other high-traffic areas. While there are certainly plenty of high-quality, squeaky clean kennels out there, and I don’t intend to disparage all kennels or paint with too broad a brush, these types of communal spaces can be vulnerable to highly contagious ailments, like ringworm. So, use kennels when you must, but do so as rarely as possible and be picky about the ones you use.

Some of these solutions involve keeping your pooch away from other dogs, but don’t make your dog an antisocial recluse. Make sure your pup gets plenty of social time, just be selective about when, where and with whom you allow him to interact.

Can People Get Ringworm from Dogs?

One of the reasons ringworm should be treated promptly is that it is incredibly contagious and spreads rapidly. But this isn’t just a risk for other dogs; it is also a risk for the human members of your family. That’s right, dogs can spread ringworm to people. In fact, ringworm, athlete’s foot and jock itch are essentially the same thing.

As with dogs, ringworm isn’t a terribly serious condition for most people. But that doesn’t mean it is fun to deal with, and it can be serious for young, elderly, or immunocompromised people. But even healthy people suffer from the irritation associated with the infection, as well as the unsightly rash.

Once again, this illustrates the importance of prompt treatment for any dog exhibiting ringworm symptoms. Because dogs can spread ringworm to people, you simply must remain vigilant against this fungal foe.

And for the record, your cat can also catch ringworm from you or your dog. As it turns out, an estimated 98% of feline ringworm infections are thought to be caused by Microsporum canis. Several other domestic animals can also suffer from ringworm infections, so consider all of your animals at risk and be sure to tell your vet about all of the animals (no matter how many legs they have) living in your home.

Has your dog ever come down with a case of ringworm? Share your experiences with us! We’d love to know about how the treatment went for your dog. Did he recover from the fungal infection quickly? Did a topical treatment work or were systemic antifungal medications required? Did anyone else in the family catch the fiendish fungus?

Let us know in the comments below. 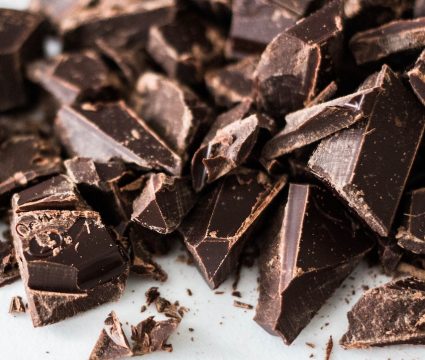 Help! My Dog Ate Chocolate! What Do I Do?

My dog got ringworm a year ago. My sister got it a few months later when she was very stressed in school. It was said to be very itchy and my dog lost some hair on a few spots. In my homecountry I found a picture on ringorm.dk with a dog infected with ringworm that looked very much like the symptoms my dog had. I went to the veterinarian and he ordered the treatment. Quite easy to get rid off. Remember to vacuum areas where your animal is staying and give it proper food.

My almost 2 year old Austrailian Shepherd (not mini but not full size) has gotten ring worm like 4 times in the past year. I’m at my wits end! Constantly cleaning, bathing, giving antifungals, antifungal sprays, and baths. How does he keep getting it?!!
Vacuuming, wash bedding, dusting, brushing him, etc. yet he still keeps getting it!

For months my dog has has had a bacterial skin infection.
His skin contained patches of black, hard flakey skin and circular flakey pink blisters from his tail to his neck. The vet ruled out mange and never mentioned ring worm. The vet gave us oral antibiotics (twice a day for 2 weeks) and shampoo (twice a week) for 2 months and we changed his diet. All of the above did not work.

Until! I tried sulfur and animal lard. 50/50 of each ingredient until it is a paste or pigment. Healed in 5 days!! I apply it once a day. Wish I tried this sooner.