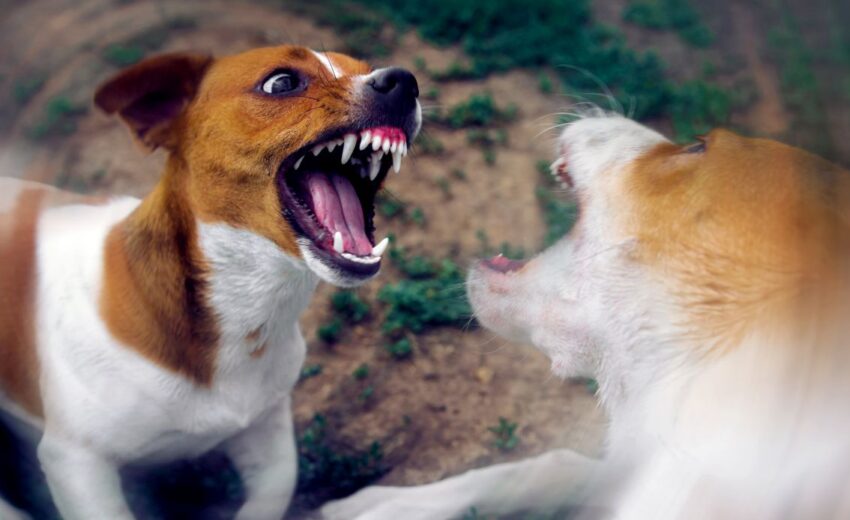 Dealing with doggy dysfunction at home is stressful for everyone, particularly when fights break out.

But while dog fights are scary, there are ways to address the issue and restore household harmony.

We’ll explain how to stop family dogs from fighting, outline reasons why they may be having issues, and break down what to do if your dogs get into a fight below.

Why Do Family Dogs Fight?

So what makes a dog suddenly start behaving aggressively or fighting with another dog in the household? In simple terms: Stress.

Sudden fighting between dogs can have several triggers, all of which boil down to some degree of stress. Relieving this stress is vital in avoiding future spats.

The most common causes of stress leading to dog fights are:

Your dogs may be experiencing one or more of the issues discussed above. Identifying and addressing them is essential for long-term success and preventing future fights.

If your dogs ever get into a fight, your first instinct is to jump in and separate them. While separating them right away is ideal, you also want to keep yourself and others safe, as accidental bites can occur. You can still separate your fighting dogs fast without getting hurt by employing several methods.

With this method, you make a loud sound to grab the dogs’ attention. You can yell, scream, or sound an air horn if you have one handy. For most of your run-of-the-mill family dog fights, this will do the trick, and your dogs will be startled enough to break up the action, allowing you to separate them for cooldown time.

While your dogs’ are fighting, throw a blanket over them. As with the distraction method, this can startle them enough to stop their quarrel, giving you a window to swoop in and separate them. This is best for minor tussles between resident dogs.

Spray the dogs with a hose or citronella device if you happen to have one. You can also toss a cup of cold water on them. As with the blanket toss, the dogs will typically go their separate ways, and you can move to separate them. This can be used during doggy dustups or grab-and-holds, though it may not always get a reaction from the latter.

Wedge an item like a board, dog gate, or folding chair between the dogs. Basically, any item that separates the dogs and keeps you out of harm’s way is ideal. Barriers work with both types of dog fights and are one of the best options in ending the clash and keeping you safe.

A break stick is necessary if you can’t separate the dogs in a grab-and-hold situation. Using a broom handle or stick, wedge it between the biting dog’s jaws and twist, effectively prying the jaws open. You can then move onto the wheelbarrow method below and separate the dogs.

Using two people, you each grab the hind end of a dog engaged in a grab-and-hold fight and pull them apart. While this technically can work, it isn’t an approach we’d recommend – it should only be a last resort.

For one, both people are at risk of injury, as either dog could redirect onto the person grabbing them. This method can also cause more damage between dogs if they’re biting down, leading to shred-type injuries.

Now that you’ve identified why your dogs are fighting and physically separated them, it’s time to work on solutions. This is a family-wide effort that will take some time, patience, and even some creativity, but in the end, your dogs will hopefully get along fine again.

Always examine your dogs one-on-one after a squabble, regardless of how minor. Not only do you need to check for injuries from the fight, but you want to check for signs of existing injuries or illness such as limping, tenderness, pale gums, and more that might hint to why he’s feeling grumpy.

Whenever your dogs have a fight out of the blue, it’s a good idea to have everyone checked out by the vet for a clean bill of health. This is particularly important with older dogs, though all canines can be masters of masking ailments.

After a fight, your dogs need time apart to calm down. This period may last hours, days, or even permanently, depending on the reason behind the fight. Using crates and barriers like dog gates can usually keep smaller dogs apart, though it can be harder with larger, powerful breeds.

Your dogs should always eat in their own space, so there’s no perceived competition over food. If you’re not doing this already, go ahead and start. Crates or dog gates can be used to give your dog privacy while eating.

Everyone eats in their own crate in my four-dog household. They know when mealtimes come to go into their crates and sit/wait for their bowls.

I like making them sit because it prevents them from jumping around crazily, and they seem to eat slower rather than wolfing it all down once presented with the bowl.

Dogs suffering from anxiety due to changes in the household, pack, or schedule may benefit from dog calming supplements like CBD. As with any supplement, you should check with your vet first to ensure it won’t interact with any of your dogs’ existing medical conditions or medications.

Desensitizing Your Dogs to  Stressors

Implementing desensitization training can alleviate your dogs’ anxieties over time and reduce the chance of future fights. This training is used to get your dog used to triggers, so they no longer elicit an inappropriate response, such as redirecting onto another dog. This is particularly useful if your dogs fight when visitors come over or the doorbell rings.

Frustrated dogs are more prone to canine clashes. A major source of frustration in dogs is a lack of mental stimulation and the ability to be, well, a dog. Canine enrichment is a critical part of your dogs’ happiness and should be part of their everyday routine, whether you go on sniffari walks or practice sandbox digging.

All the changes in the world won’t do any good if you’re not consistent. Dogs thrive with structure and routine. Maintaining these is key to ensuring long-term success. Everyone in the house needs to be on board with your new regimen in preventing dog fights.

With life pulling you every which way, your dogs can suffer. They may see less of you and have their daily walks swapped for leisurely backyard strolls. While any outdoor time is great, not every breed is content with this arrangement. Daily walks or jogs are critical in burning off excess energy and frustration, particularly with young dogs or athletic pups.

Hiring a dog walker is a good idea if you can’t meet these needs, though they should be made aware of your dogs’ fighting history.

After stopping your dogs from physically fighting, you need to separate them entirely, ideally in separate rooms, so you can check them over individually for injuries.

If any are found, you need to discern if they warrant emergency treatment, like stitches, or if they are minor scrapes that just need cleaning and observation.

Once any injuries are tended to, it’s critical for everyone involved in the fight to have time to decompress alone. That includes both you and your dogs.

This calms the frantic energy and allows everyone to chill out a bit. During this time, you can discern the possible cause of the fight.

If the reason behind the fight is obvious, like food, you have a clear path forward. You can incorporate pack walks and other slow introduction tactics to smooth things over before returning to normal with safety measures in place.

The timeline here varies, with some dogs only needing mere hours to be fine again while others may require days or weeks.

If the cause of the dog-on-dog aggression is uncertain or if the fight was severe, you may want to look into hiring a certified dog behavior consultant to sort things out.

But whether you can tackle the issue yourself or require professional help, the dogs cannot be reintroduced until the underlying issues are sorted out. In the event of severe fights, they probably shouldn’t be trusted alone together again.

Your timeline to reintroduction following serious fights will differ significantly from those experiencing minor clashes, so go into this phase with patience and an open heart.

It’s also important to keep your dogs’ safety front and center. Not every dog can live happily in multiple dog households. This isn’t a failure on your part. In these cases, the best path forward may be rehoming one dog.

What NOT to Do During a Dog Fight

You can make mistakes in the heat of the moment, but knowing what to do and what not to do ahead of time can prevent unnecessary injuries or worsening doggy turmoil.

If your dogs are fighting, do not:

How to Distinguish Fighting from Play

Sometimes play can get a little noisy and seem like fighting, making it hard to tell the two apart. Before reacting, look at your dogs and observe their interaction to discern what’s really going on.

Dog fighting and play can be told apart in several ways:

Dog fights fall into two distinct buckets that differ in appearance and severity. Recognizing the difference is key in moving forward and finding a resolution. It’s also crucial in knowing how to separate the dogs safely.

These are the most common fights you’ll see between dogs who live together. Doggy dustups are usually very loud with a lot of snarling, snapping, and movement, but they don’t involve doggo death grips like more serious fights do.

Fortunately, this type of fight is usually short-lived and easy to break up.

While doggy dustups are less severe, your dogs can still get seriously hurt during them, particularly if one dog is more powerful than the other. These can also spin out of control into the more serious type of dog fight, the grab-and-hold.

Grab-and-hold fights are less common than doggy dustups and a lot more dangerous for dogs and humans. In these fights, one or both dogs will grab and hold onto the other, potentially inflicting severe damage or even death.

Unlike doggy dustups, grab-and-hold fights aren’t generally loud or boisterous. Instead, they’re often quieter and locked onto one another, both with their mouths and bodies.

Separation is difficult, as the dogs ignore commands or loud distractions and often ignore interventions like hoses or sprays. Special care must be taken in separating dogs engaged in grab-and-hold fights to prevent worsening injuries between dogs or redirection onto humans.

Fighting between family dogs is stressful for everyone, but you can overcome this hurdle with patience and perseverance. It may mean changing routines or, in some cases, rehoming, but in the end, everyone’s safety and happiness are most important.

Do you have any advice for owners struggling with resident dog issues? Any bonding activities you’d recommend? Please share with us in the comments. 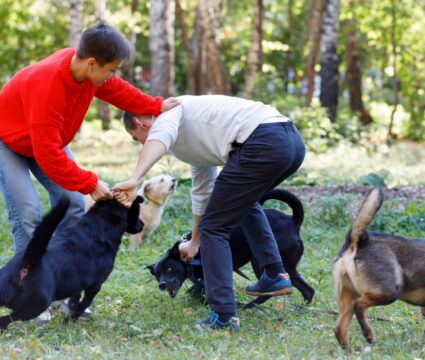 How to Stop Dog Aggression Toward Other Dogs