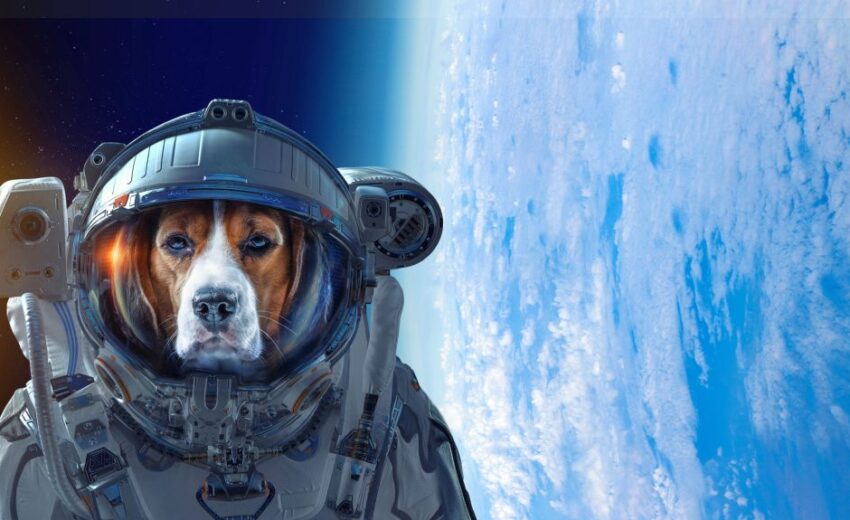 Even well before our first ascent into the stars and more recent plans to explore the surface of Mars, humans have always been fascinated by space. For centuries we’ve gazed up at the stars in awe, pondering the vast galaxies beyond our borders, and the impact of spaceflight is obvious, appearing now in everyday conversation thanks to films and the billionaire space race.

If you think of yourself as an expert in space expeditions, or you’re simply a star-gazing enthusiast, consider naming your four-legged friend something space-inspired. The sky offers endless options for any pup; there’s no shortage of stellar celestial names for your new pooch!

Names of Real-Life Dogs in Space

Soviet space dogs traveled where man had yet to explore during the earliest days of space travel. Dogs and other living organisms stood in as live guinea pigs for people as the program worked toward eventual human spaceflight. Canine space cadets were generally mixed breed of dogs.

Plucked from the streets in the 1950s and 1960s, a few of these courageous canines had a tragic one-way mission, though several went on to survive and lead happy lives back on Earth.

Street dogs were preferred over house canines because of their scrappy nature and willingness to eat the less-than-palatable food offered during canine flight. All were female, as collecting a female dog’s waste was easiest during canine orbit and their temperaments worked best for the role.

Some of the real dogs who travelled in space include:

As dog lovers and firm believers in animal welfare, our hearts ache for the animals in space whose lives were lost during early space missions. Using a hero dog’s name shouldn’t come with sadness, however, as it’s a great way to honor a life and keep their memory alive.

If you rocket around our solar system or others, you’ll find a number of celestial bodies orbiting stars called planets. Planets make up a small but significant collection of potential space names for dogs.

Exoplanets are planets located outside of our solar system. These are named by the International Astronomical Union and often get their namesakes from Earthly mountains and ancient gods.

Few space names shine as brightly as those inspired by the sun. Check out these picks related to our galaxy’s star.

Moons are natural satellites of a planet. Earth only has one, while other planets can have loads. Check out these mighty moon names that might fit your doggo.

Constellations are groups of stars that trace various shapes in the sky. The stars in constellations are often unthinkably far from each other, but from our viewpoint on Earth, they can appear as though they’re in the same stellar “neighborhood.”

Capture your dog’s star power with these star-themed names. From the well-known to the unfamiliar, they come in all sorts of styles.

Comprised of rock and ice, comets are sun-orbiting masses sometimes called the “dirty snowballs” of the universe. While we don’t think any dog wants to be called a dirty snowball, we do think some comet names make cool mutt monikers.

These brave explorers have gone where few have gone before, making them awesome name associations for your courageous pooch. Here are some great astronaut-inspired dog names.

Astronomers are scientists of astronomy, studying everything from asteroids to black holes. If you’d like a less common space moniker for your pooch, check out these astronomers for inspiration.

Space Names for Dogs From Television and Film

Space travel is popular on the big screen, providing endless adventure and intrigue. If you look to film and television, you’ll find loads of awesome space names for dogs.

Outer space is full of countless named objects with a diverse mix of monikers.

Space-Related Words in Other Languages

An easy way to find cool, uncommon dog names related to space and other interests is to look for words in other languages. Check these out.

Well, there you have it! More than 500 names that’d be perfect for a pup who wouldn’t mind spending a day in space.

Do you have any other clever ideas for space-themed dog names? Did we miss any important celestial names that’d work for a canine? Share your picks in the comments!

Also make sure to check out our articles on: 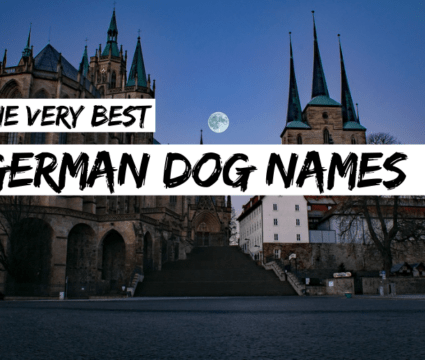 There are some good name ideas here. I’ve definitely taken inspiration in terms of naming my new puppies. I think it’s probably worth you checking for spelling, grammar use and punctuation before you publish a page though. Also, maybe get someone to read through what you’re going to publish as a fresh pair of eyes because some of the sentences don’t make any sense at the moment.

Hey, Richard. Glad you liked our space-inspired names!
The SPAG errors were my fault, but they should be fixed now.
Thanks for bringing them to our attention!

You think launchpad is a good name for a dog? Lmfao. Most of these are garbage. Why try so hard??

Hey guys! This is my dog “launchpad!”

So you said Buzz as a reference to Buzz Lightyear but you do know there’s and astronaut named Buzz Aldrin right. He was the second person on the moon