All dogs have special talents that make them well-suited for different activities or jobs.

Some are good at agility, others are great at finding things with their nose, and some are just awesome for keeping your lap warm!

But there are also a couple of dog breeds that excel at livestock protection, making them excellent assets for your farm or homestead.

Below, we’ll discuss some of the best breeds for protecting your goats, sheep, chickens, or whatever other animals you raise.

We’ll also answer some common questions about livestock guardian dogs to make sure they fit in well on your farm!

How Do Livestock Guardian Dogs Protect Your Animals?

Domestic livestock, such as sheep and goats, are vulnerable to attacks by various wild predators. But livestock guardian dogs, commonly referred to as LGDs, can help protect your animals and reduce the risk of predation.

LGDs have been used all around the world for centuries to fend off predators and protect various farm animals. They typically do so in three primary ways:

There are a couple of characteristics livestock guardian dogs have in common.

Here are some of the traits that make these breeds well-suited for protecting your farm.

There are a bunch of different livestock guardian breeds you can choose from, but the following ones are some of the most popular. Just be sure to think carefully about the characteristics of each breed before making your choice.

Anatolian shepherds originated in Turkey and are known for being very strong and rugged.

The breed is known for having good sight and hearing which makes them the perfect livestock guardian dogs. They live pretty long lives, occasionally reaching 13 to 15 years of age, and they usually weigh somewhere between 90 and 150 pounds.

These dogs require an owner who is capable of handling an assertive, strong-willed dog. While Anatolian shepherds are generally calm and loving, they require proper training to ensure that they are effective protectors.

Note: There’s a bit of controversy about the Anatolian shepherd and the Kangal. They’re very similar dogs in many ways, which leads some authorities to consider them the same breed. Others, however, continue to consider them distinct entities. We’re listing them separately (see below) because it gives us the chance to share an extra photo of these adorable doggos.

Assuming that you consider the breed distinct from the Anatolian shepherd, the Kangal is a super protective, alert, and independent dog, which is well-suited for a life spent protecting livestock.

They reach similar sizes and ages as Anatolian shepherds.

The ultra-fluffy Great Pyrenees is known for his gorgeous white coat, confidence, and fearless attitude, making the breed an excellent choice for livestock-protection work.

They are usually a breed that is happy living outdoors, although they’re best suited for cooler climates given their thick coats.

When unprovoked by predators, these big white dogs are calm, gentle, and zen-like making them great for families with children. But, when predators approach, they become fearless and formidable defenders of their flock.

Great Pyrenees dogs live around 10 to 12 years and usually weigh between 80 and 120 pounds.

These shaggy sheepdogs hail from Hungary and are commonly referred to as “mop dogs” due to their dreadlock-like appearance. Don’t be fooled by their distinctive tendrils though — this breed is known for being especially strong with dense bones and lots of muscle under all those dreadlocks!

These dogs are independent and steady, making them well-suited for livestock-guarding work. But this also makes them a bit challenging for first-time owners; they’re best left to those with a lot of dog-care experience.

These huge, fluffy dogs are protective and tenacious making them excellent livestock guardian dogs. An ancient breed, the Tibetan mastiff was used by nomadic tribes of Nepal and Mongolia to protect property and livestock. These huge helpers weigh anywhere between 80 and 160 pounds, and they usually live for 12 to 15 years.

While they are gentle and mellow around the house, they can be pretty territorial so make sure that these dogs are properly socialized with strangers and young kids.

The Kuvasz is a Hungarian dog breed who is extremely intelligent and loyal. This, in combination with their large size and brave disposition makes them great livestock protectors. However, in recent years, many people have begun keeping these dogs as family pets.

These sweet, intelligent dogs are huge and generally very gentle with humans and other dogs. They are great at protecting flocks, and their independent nature makes them excellent LGDs, as they often excel at making decisions and solving problems without human help.

The Pyrenean mastiff generally does well around children and will only feel the need to protect when provoked by a predator.

The sweet-faced akbash is originally from Turkey and has been used as a livestock guardian dog for centuries. Their name comes from the Turkish work akbas, which means “white head.”

The breed’s independent and brave nature makes them great protectors for livestock and families, and they often work well with a variety of different livestock species. The akbash lives about 10 years and weighs anywhere from 90 to 140 pounds.

Polish Tatra sheepdogs were initially developed to protect livestock of farmers living in the Tatra Mountains of southern Poland. Many years later, they still make excellent LGDs, thanks in part to their loyal and hard-working nature.

The breed is known for being very gentle with families and children despite being incredibly independent. They typically live for 10 to 12 years and weigh anywhere between 80 and 130 pounds.

This Italian sheepdog is known for its alert instincts and loyal attitude, making the breed an excellent choice for livestock guardian dogs. In fact, this is another LGD breed that is well-suited for guarding a variety of different farm animals, ranging from sheep to chicken to ducks.

Maremma Sheepdogs are a bit smaller than other livestock guardian dogs, with an average weight of 77 to 99 pounds. They are typically one of the best LGDs with children, and they usually live for about 13 years.

The Spanish mastiff is a huge breed that is known for its kind and intelligent nature.

It’s imperative that these dogs are properly trained from a young age due to their sheer size. Even if a mastiff is innocently playing around, his large weight could easily injure a small child if he is not properly trained.

The Karakachan is a vigilant, independent dog breed, who is well-suited for protecting livestock. They are extremely alert and known for their acute senses. They bond strongly with their flock and will not hesitate to defend them from threats.

The breed usually weighs between 70 to 120 pounds and has an average life expectancy of 12 to 14 years.

However, it is important to note that this breed is very sexually dimorphic, as males reach much larger sizes than their female counterparts.

Things to Think About Before Getting a Livestock Guardian Dog

Before committing to raising a livestock guardian dog, there are a couple of important factors to take into consideration.

Below, we’ll answer some of the most common questions concerns livestock guardian dogs to help you determine whether or not they are a good pick for your farm.

Do livestock guardian dogs need to be trained?

Absolutely. While livestock guardians (LGDs) are likely to have some innate livestock protection sensibilities, they still require an extensive amount of training to properly understand and execute their jobs.

However, compared to other dogs, they may not need to be specifically trained to not kill chickens – that may come naturally to them.

Livestock guardian dogs begin their training as early as 8 to 16 weeks of age. This is when they should be placed with the flock they’ll be required to protect.

Should I get a male or female livestock guardian dog?

Either sex can work as an effective livestock guardian dogs.
Generally, males will roam the perimeter of the farm or enclosure more while females will stay closer to the flock. Males will often grow larger than their female counterparts, which can represent a “pro” or a “con,” depending on your needs.

Ultimately, it comes down to a matter of personal preference.

How many livestock guardian dogs do I need?

The number of LGDs will vary greatly on the size of your farm, protection needs, and age of the dogs.

Recommendations vary wildly, so trial-and-error is often required to figure out the best number of LGDs for your farm. Some farmers utilize one LGD for every 30 to 50 sheep, while others recommend using two or three times as many.

If you plan on adding another LGD, it’s recommended that you wait until you have a mature, grown LGD. Puppy livestock guardian dogs can learn well with a mature adult in their presence.
In addition, having more than one LGD puppy at a time can be trying, even for the most experienced dog owners.

Livestock guardian dogs should be properly socialized with all members of your family, including kids, to ensure that they do not perceive anyone as a potential threat.

However, it’s important to understand that these working dogs do not always make good companion pets. In order to stay focused on their job, LGDs need to have their lives centered around protecting the farm.

Most LGDs have thick double coats, which help protect them from predators and the elements. Some even have mane-like fur to protect their neck and shoulder region from the teeth of predators.

Additionally, livestock guardian dogs work to deter predators in a number of ways before engaging in any physical confrontation. Moreover, these dogs are super strong and robust on their own.
Nevertheless, some farmers and homesteaders feel better when providing their dogs with protective garments. There is certainly no reason you can’t do so if you wish.

Do livestock guardian dogs need to be groomed?

Yes! It’s recommended that long-haired livestock guardian dogs are properly groomed at least once per month to keep their coat as healthy as possible.

Minimally, you’ll want to address and remove any mats present before they become problematic. Additionally, unkempt dogs develop bad odors, so you’ll want to make sure to bathe your LGDregularly.

Having a livestock guardian breed can be a great way to protect your small farm or homestead. These dogs are happy to help protect your farm and flocks and enjoy working on a daily basis.

Do you have experience with any of these livestock guardian breeds? What’s the best part about having them as a part of your farm? We’d love to hear all about it in the comments below! 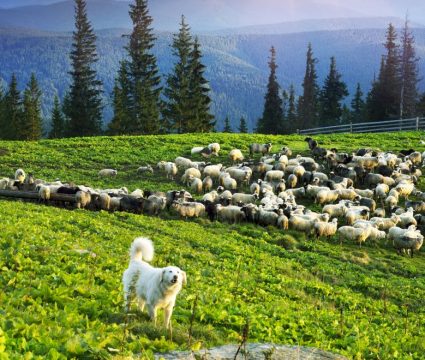 You may want to change out your pic of the Akbash, which are WHITE – Looks like you have the Karabas (BLACK head), not Akbash (WHITE head). You actually noted the color connection to their name, just got the pic itself incorrect. Awesome dogs.

Oops! You’re right, Sandy — that was my fault. I just added the wrong photo.
I’ve corrected it, and we appreciate you pointing out the mix up.
Thanks!

What an awesome article. Found all the basics I wanted to know about LGD breeds. THANK YOU!

So glad you enjoyed it, Mina!
Be sure to bookmark us.
🙂