Why Do Dogs Howl? 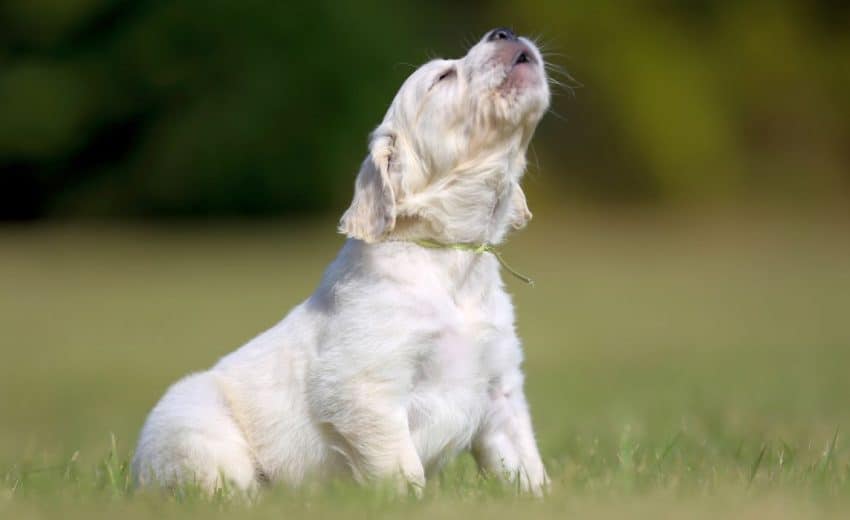 Howling in Dogs: What Does it Mean?

Howling can happen with dogs for a variety of reasons, ranging from stress to excitement to basic communication. Dogs howl in response to sound triggers as well as to communicate with others. Context is essential to understanding why dogs howl.

All dogs are equipped with the ability to howl. For some, however, it might come more naturally than it does for others.

We’ll dig into the subject of dog howling below and discuss a few reasons why your hound might be howling like her ancient ancestors once did!

Key Takeaways: Why Do Dogs Howl?

Why Do Dogs Howl?

Howling is just one of many forms of canine communication. And, as with many other doggo behaviors, context is key when figuring out why your pup might howl.

In other words, the root cause for a canine’s howling could differ from dog to dog, and it can even vary depending on the situation.

Let’s explore the reasons why your dog might howl in specific situations below!

Why Do Dogs Howl at Sirens?

Often, dogs will howl at the sound of high-pitched noises such as sirens or other loud noises.

Although there is the potential that your pup finds the sound irritating or frightening, there could be a much more instinctual response happening.

In wild-living dogs, such as wolves and coyotes, howling is their primary way to communicate. The sound a siren makes may emulate a similar auditory pattern, so it may trigger an instinctual impulse to “holler back.”

Additionally, the fact that many dogs howl at sirens without showing other signs of stress is further evidence that they’re just howling at the siren to communicate.

Why Do Dogs Howl to Music or When You Sing?

Dog’s may howl at the sound of music because the melody or tune mimics the same elongated sound of a canine howl.

It could also be an example of simple canine glee!

It is often exciting for your pup to hear you sing, or to sing along with the music. That’s right – dogs like music too! Your emotions and actions may be reinforcing the howl if you get excited or shower her with attention when she sings along.

Why Is My Dog Howling in His Sleep?

We don’t know exactly why some dogs howl in their sleep, but it is possible that your doggo could simply be dreaming.

The scientific research on canine sleeping patterns strongly suggests that our pup’s not only dream, but also that they likely dream about waking activities just like you do!

So, whether her brain thinks she is chasing imaginary bunnies, returning the calls of the neighboring dogs, or accompanying you on backup vocals, it’s entirely possible that she is having a pretty epic dream!

What Does It Mean When Your Dog Howls at You?

Howling is a way to communicate, and sometimes they howl when they are telling you they would like to play. It’s just a good way to get your attention!

It’s easy to see how this works: Dogs do what has been reinforced in the past. If you think your pup’s howling is funny or even annoying, it’s likely grabbed your attention, which is exactly the reward she was hoping for.

You have thus (perhaps inadvertently) reinforced her howling and encouraged more howling in the future!

Is that a bad thing?

Not at all! This kind of owner-directed howling certainly isn’t a sign of aggression and is no cause for concern (unless you have close neighbors that tend to complain).

Why Do Dogs Howl at the Moon?

Wolves, close ancestral relatives of modern-day dogs, howl to communicate two things: the establishment of territory and to locate other members of their family unit. In both cases, the intended targets of their howls are other canines.

Often, this may occur at dusk or dawn, so wolves are likely not actually howling at the moon — the moon just happens to be visible! It’s really just a coincidence.

And although dogs are related to wolves, they are different species, they behave in very different ways, and they often howl for different reasons. Domestic dogs don’t have to locate distant family members or establish territorial claims.

Instead, domestic dogs probably howl at night more often than during the daytime because, overall, there is a lot less background noise and it may be easier for them to hear howl-eliciting stimuli like neighboring dogs off in the distance or other strange noises that go bump in the night.

Dogs may also spend more time outdoors in the evenings because their humans are home from work.

Why Do Dogs Howl When They Hear Other Dogs Howling?

Howling is a deeply ingrained canine behavior and a way that dogs communicate with one another.

For wolves and wild living dogs, howling is a way to either locate and communicate location with other dogs or to warn other dogs to stay away.

It is likely the same for our furry domesticated companions, or it could even be somewhat reflexive — hearing a howling hound means all the puppers chime in automatically!

The darker side to howling is that it could also mean that your pupper is upset, stressed, anxious, feeling ill, or in pain.

Look for the following to determine if there is something wrong with your pooch:

If you notice any of these clues alongside howling behavior, you’ll want to dig deeper and try to figure out what is going on. This includes getting your pooch a check up to make sure that she’s healthy.

In some cases, howling can be a sign of separation anxiety.

Often, people are unaware that their pup is experiencing separation anxiety until they get a call from neighbors telling them that their unhappy four-footer is howling for most of the day.

If your dog is howling due to separation anxiety, she will only howl while you are not at home.

There are also other symptoms separation anxiety that may or may not be present, such as destructive chewing, stress, inappropriate elimination, and even self-harm.

A positive-based trainer or behavior consultant can help your pup overcome her distress about being left alone or in isolation.

If your pup is experiencing pain, this could very well cause her to howl. This is part of the reason it’s always a great idea to have your vet do a wellness exam to rule out potential medical-related issues for your howling hound.

This is an especially good idea if your dog is exhibiting any other signs of pain, such as:

Often, behavior “problems” or changes in behavior may have an underlying medical concern. Accordingly, it’s always a good idea to rule out any health-related issues first.

How Can You Stop Your Dog’s Howling?

If your dog howls every now and then, it may not be a big deal. But, if your dog’s howling becomes excessive, you may feel you need to put a stop to it.

First, you’ll need to do some detective work to figure out the trigger of your pup’s persistent howling.

Some questions to ask yourself:

Once you have figured out the reason for the howling, you can figure out a solution.

If your dog’s howling is triggered by your absence or pain, a veterinarian or positive dog training professional (depending on the nature of her problem) can help you deal with the underlying cause. This might resolve the howling without any further intervention.

In most cases, your vet should be able to alleviate your pup’s pain, and you can often treat your dog’s anxiety — although you may need the help of a trainer.

Some of the best techniques for easing your dog’s anxiety include:

Attention-seeking howling may be cute when it happens sporadically, but it can become a serious issue if it happens all the time. Fortunately, there are a couple of things you can do about it.

If your dog is howling at you to solicit your attention try to:

Sound-triggered howling is also pretty common, but there are things you can do to limit this behavior too.

If your pup’s howling is triggered by sounds, try to do the following:

How Can You Get Your Dog to Howl on Cue?

Many owners are probably reading this to learn how to stop their dog’s howling, but others may want to teach their pooch to do so on purpose!

Fortunately, teaching your dog to howl on cue isn’t all that hard if you know what triggers her howling.

Of course, we never want to put our dog in a position of pain or anxiety, and I am not suggesting that you should. But, if you know that sirens, other howling dogs, or music trigger her to howl it’s a gateway to putting it on request!

If nothing else, just play this video and crank up your speakers! It certainly appears effective!

Dog behavior is fascinating, and learning about communication and natural instincts can benefit our understanding of why our dogs behave the way they do.

Does your dog like to howl? What triggers your pup to start howling? 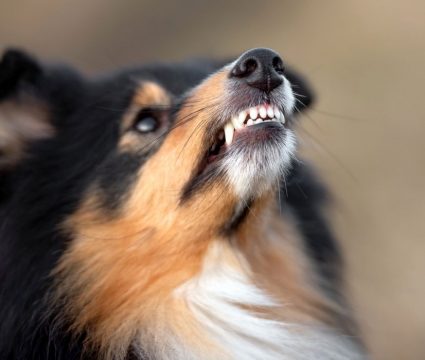 Types of Dog Growls: What is My Dog Growling About? 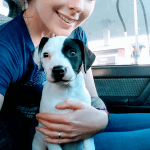