Can Dogs Get Headaches? 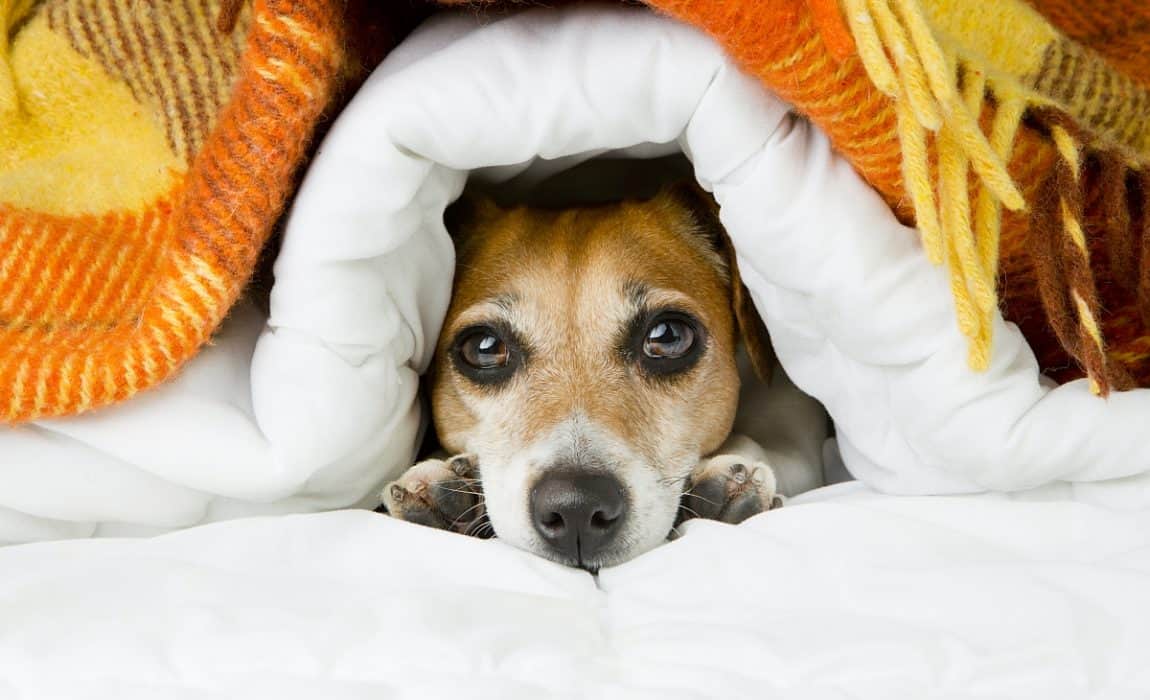 One of the biggest challenges pet owners face is intuiting the thoughts, feelings and experiences of their companions.

Since your dog can’t tell you when she is in pain, when she is feeling anxious, or when she is hungry, you have to interpret her behavior and make the best inference you can.

Sometimes, this is pretty easy. If your dog is repeatedly licking one of her feet, you can likely assume her paw hurts or itches. If she’s whining and running around the house, she’s probably anxious about something. If she’s following you around the kitchen and giving you the eyes, she’s probably hungry.

But there are other things that can be very difficult, if not impossible, to understand. Headaches definitely fall into this category.

Nobody knows for sure whether dogs can get headaches, but most vets believe that they do – even in the absence of concrete evidence. As put best by Ella Bittel, DVM:

…common sense suggests that any creature with a head and pain perception also has the basic capacity to suffer from headaches.

We’ll explore some of the clues and evidence that suggest dogs get headaches, and discuss some of the likely causes of headaches and treatments available below.

Key Takeaways: Can Dogs Get Headaches?

Potential Signs of Headaches in Dogs

By and large, the signs of headaches in dogs are thought to be roughly similar to those exhibited by humans. Some of the most common probably include:

Many of these signs are admittedly vague, but they could all indicate that your dog’s head hurts. As always, pay attention to your instincts – you know your dog better than anyone else.

Like humans, dogs probably get headaches for a variety of reasons (although let’s hope that this does not include the alcohol-induced variety). Some of the most likely causes at play include:

You’ll need your vet’s help to treat most dog headaches. Most vets will concentrate on treating your pet’s symptoms, but they may also recommend various tests to rule out serious problems.

In the meantime, there are a few steps you can take that may help your pup feel better. For example, you may want to:

Dim the lights or allow your pup to rest in a dark room.

Provide your dog with a cool place to lie down, such as the bathroom floor. A cooling dog vest or mat may also relieve some pain.

Remove any irritating stimuli, including children or other pets.

Let your dog rest on your lap and gently stroke her ears, chest or haunches – the resulting endorphins may help.

Provide your pup with a pillow or headrest if you don’t normally do so.

Prevent your dog from encountering allergens, if you suspect her headaches are of the allergy-induced variety.

There are a few different medications that may provide relief for your dog, including NSAIDs and opioid-based medications. Your vet may also prescribe allergy medications if they are deemed appropriate.

Avoid giving your dog any medication without first consulting with your vet, as many seemingly innocuous medications – including ibuprofen and acetaminophen, among others – can be very dangerous for some dogs.

A Dog with a Migraine: A Case Study

In 2013 researchers I.N. Plessas, H.A. Volk and P.J. Kenny wrote about a 5-year-old cocker spaniel that exhibited some of the symptoms associated with migraines. The team published their findings in a 2013 issue of Journal of Veterinary Internal Medicine, and although they do not make a definitive diagnosis, their work yielded some interesting results.

But be warned: The study has some hauntingly heartbreaking passages regarding how terribly this poor dog seemed to suffer, so read with caution (spoiler alert: It does have a reasonably happy ending).

Understand that migraines aren’t “typical” headaches (as anyone who has ever had a migraine can attest to). Not only do they cause moderate to maddening levels of head pain, migraines often cause photophobia (sensitivity to light), nausea, and fatigue.

Some people even suffer truly bizarre symptoms – called prodromes — before the headache sets in. For example, some people see auras around everything or, experience tingling on one side of the body, while others suffer from aphasia (the inability to speak coherently).

Prodromes occur in roughly three-quarters of all migraine sufferers.

In total, migraines can last for anywhere between 4 and 48 hours or so. Most people feel extremely fatigued following a migraine and require a day or two of rest after the pain subsides. Some even suffer from temporary depression after recovering from a migraine.

Migraines are pretty tricky to diagnose in people. Most doctors use a combination of diagnostic tests, designed to rule out seizures and other possible causes, and patient reports of the symptoms. Dogs are lousy at filling out forms, so diagnosing migraines in canines is even more difficult than it is for people.

The dog in the 2013 study occasionally experienced episodes of apparent fear, which were followed by the dog emitting vocalizations. These episodes were observed throughout the dog’s life, beginning when she was about 6 months of age.

The episodes would typically begin with the dog hiding under furniture and withdrawing from her family. A few hours later, the pain appeared to set in, and she would cry out relatively continuously.

She often suffered from both photophobia and phonophobia (sensitivity to loud noises) during these episodes, and she’d sometimes refuse to eat and drink. Many times, she also displayed symptoms of extreme nausea, such as drooling and frequent swallowing.

These symptoms are all consistent with a migraine, but there was one more piece of important evidence: The pooch would usually act lethargic and exhausted for a few days following the episodes.

As you can imagine, the poor pup’s owner took the dog to several different vets, who searched far and wide for a cause. The spaniel’s results all came back normal, so a variety of different medications were administered to try to treat the symptoms. Most – including opioid painkillers – failed to produce any results.

However, as the vets continued to rule out one condition and medication after another, they considered migraines. This led them to prescribe Topiramate, an anti-epileptic medication commonly prescribed for humans who suffer migraines. Thankfully, this appeared to have a noticeable effect, and although it didn’t eliminate the episodes altogether, it significantly reduced her symptoms and the duration of the episodes.

So, while this single data point is far from conclusive, and it does not necessarily prove that dogs can suffer from migraines or headaches, it is certainly consistent with the possibility.

Just some final food for thought: At least one study has demonstrated that some dogs alter their behavior before their owner suffers a migraine. This doesn’t really speak to whether or not they suffer from headaches or migraines themselves, but it is kinda spooky, right?

I wonder what else my dog knows that I don’t.

Have you ever suspected that your pooch has a headache? Did you seek veterinary attention for it? Have you identified a likely cause of the problem? Tell us all about your experiences in the comments below! 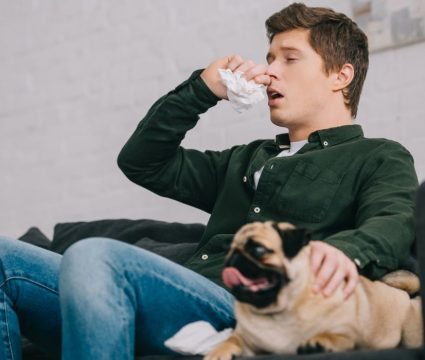 Can Dogs Get the Coronavirus?

I noticed my friends dog leaves the room and it usually sleeps there by him and it’s been laying on the living too, couch …. I went in the room and I got an almost immediate headache and he was complaining of one as well so I wonder if somethings wrong. They’ve done lots of construction lately and I’m new here. My friend is sick from a spinal operation too so idk.