Medical Cannabis For Dogs: Can Marijuana Help My Pet? 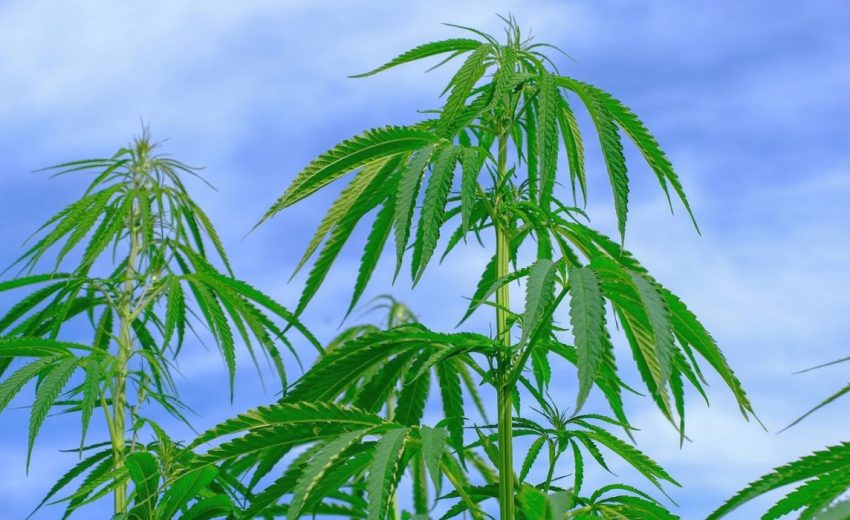 As dog owners, we often take our pet’s veterinary care for granted.

We give our dogs antibiotics to clear infections, we give them anti-parasitic drugs to prevent heartworm, and we apply topical ointments to their skin to soothe rashes and lacerations.

But unfortunately, modern veterinary medicine does not yet have all the answers.

Some ailments defy attempts at treatment, leaving veterinarians with little help or hope to offer their canine clients. And sometimes, the treatments they can offer or medicines they can prescribe are (arguably) worse than the original affliction.

When faced with such unenviable challenges, some dog owners consider turning to alternative or experimental medications to help ease their pet’s suffering.

One such alternative treatment that is gaining more and more attention is the use of cannabis for dogs.

While little research has been conducted on the subject, and veterinarians have yet to arrive at a consensus on the subject, a number of anecdotal reports suggest that it may be helpful in some cases.

We’ll dive into the issue below and explain everything you need to know.

Is Cannabis a Viable Medicine?

Nevertheless, a lot of people remain skeptical about the medicinal value of cannabis and think that medicinal use is just an excuse for people to get high.

But to the contrary, plenty of real, university-conducted studies, published in well-recognized, peer reviewed journals have demonstrated that there are a variety of medicinal applications for cannabis.

So, the evidence demonstrates that cannabis has some legitimate medical applications — at least as far as humans are concerned.

The question is, can it help treat your sick dog?

Stay on the Right Side of the Law

Cannabis (both medical and recreational use) is not legal in many countries, and it is only currently legal in a few states within the US.

This article is for informational purposes only. Please always respect the laws in your state or country regarding this matter.

The Question of Applicability: Would It Even Work For Dogs?

Because it is such a pharmacological powerhouse for people, it is reasonable to wonder if cannabis may also treat a variety of ailments in dogs – particularly those illnesses that are difficult to treat otherwise.

Our four-footed friends are very biologically different from humans in some respects, but they are quite like us in others.

You may even use some of the same medications to treat your children and your canines. But it is not yet clear if cannabis is suitable for use in dogs.

Very little research has been conducted on the subject, and the bulk of the collective wisdom has come almost exclusively from anecdotal accounts.

Some people have used cannabis to help calm their pooch’s anxiety (although it’s worth noting there’s plenty of dog-friendly anxiety medicines available, both online and via vet prescriptions).

Others owners have cannabis to treat their dog’s nausea or reduce the inflammation associated with bladder cancer, stimulate their dog’s appetite, address behavioral concerns, and soothe tummies plagued by irritable bowel syndrome.

However, most reputable poisonous plant lists include cannabis (typically under the slightly pejorative term marijuana) somewhere between garlic and nightshade.

But, as toxicologists are fond of saying, “the dose makes the poison.” It is possible that cannabis is safe for dogs at low doses, and problematic at high doses.

The unfortunate truth is, scientists don’t yet know if cannabis is a valid treatment for your dog’s medical problems, nor do they know what the safe dosage range is. The only way to learn these things is through careful, rigorous trials, which will take years to complete.

The Science Behind Cannabinoids in Cannabis

To understand the medicinal use of cannabis, you must learn a little about its chemical composition. Cannabis contains a variety of different active ingredients, called cannabinoids. Different cannabinoids elicit different effects in the body.

Although scientists are only beginning to examine medical cannabis for dogs, they do know that dogs have the same cannabis-sensitive neural circuitry that we do.

Called the endocannabinoid system, it features specialized receptors that alter the ways in which your neurons communicate once stimulated by cannabinoids.

Some cannabinoids are good for treating pain, while others are good for reducing the intraocular pressure that accompanies glaucoma.

Other cannabinoids have demonstrated antibacterial properties, and human patients undergoing chemotherapy have been using cannabis to counter nausea for decades.

Tetrahydrocannabinol (THC) is the most famous cannabinoid. While THC provides a plethora of medicinal benefits, it is the primary psychoactive component of cannabis — it’s the cannabinoid that gets you high.

Other important cannabinoids include cannabidiol (CBD) and cannabinol (CBN). These are less psychoactive than THC, and are primarily of interest for their medicinal properties.

While raw cannabis contains varying amounts of these and other cannabinoids, prepared medications and other products frequently contain a small subset of the cannabinoids present in a raw, whole-plant sample. This allows for the targeted treatment of disease and reduces undesirable side effects.

The goal should always be to treat your dog’s pain or discomfort, not to get her stoned.

Some of the most important benefits of different cannabinoids (for humans) include:

The Sticky Wicket: Cannabis May Help Dogs, But It’s Not Legal (Yet)

Even though a growing number of pet owners are experimenting with canine cannabis, the plant’s legal status prevents most veterinarians from recommending its use.

Even in states that have legalized recreational cannabis, veterinarians may suffer legal consequences from recommending or prescribing cannabis for their patients.

This complicates the situation for many dog owners. On the one hand, cannabis may help improve your dog’s health, but on the other hand, it may be dangerous for your dog.

This is a clear case in which veterinary advice is crucial, and yet unattainable for most people.

Some sympathetic veterinarians try to thread this needle by speaking in generalities or otherwise tap-dancing around the law, but many others are (understandably) reticent to do so.

Fortunately, some states are considering changing the laws relating to the veterinary use of cannabis, which may help shed more light on the entire issue.

Some of the ailments that people treat with cannabis are the same ones that owners are now using to treat their dogs. A few common examples include:

Despite the federal prohibition on cannabis and cannabis-derived products, there are several legal products on the market that contain cannabis derivatives.

The difference is, these products are often made from hemp – a non-psychoactive form of the plant.

Unlike cannabis grown for recreational human use, hemp contains very little THC. Instead, hemp has been selectively bred for its long fibers, which are used in a number of industrial contexts. The plant and seeds are also incorporated into some animal feeds.

However, while hemp does not contain significant amounts of THC, it does contain other cannabinoids, including some with medicinal value. Accordingly, manufacturers have begun marketing hemp-derived products to treat dog ailments and promote health.

There are also a few different lines of CBD oil-infused dog treats — such as HonestPaws — designed to alleviate canine pain and even allergies.

There are plenty of owners who tell anecdotes about their pooches’ aches and pains being resolved through the use of these hemp or CBD-oil infused treats, so it may be worth a try for desperate owners. Just be sure to discuss the issue with your vet first.

Hopefully, with further research, these items may one day prove useful in helping to treat ailing animals.

The Bottom Line: Medical Marijuana For Dogs May Be An Option, Some Day

Cannabis represents an intriguing option for the treatment of some illnesses and ailments that afflict dogs. However, such use remains illegal and is rarely guided by sound medical advice.

Nevertheless, some people have used cannabis to treat their dog’s illness, with seemingly positive results.

This does not prove that cannabis is a viable treatment option, as dog owners are subject to the placebo effect and wide spread trials are needed to assess how cannabis affects dogs differently. Quite simply, much more research is needed.

If your dog is battling a difficult-to-treat condition, and you are interested in using canine cannabis to treat her, discuss the issue with your veterinarian.

While your vet may not be comfortable recommending cannabis for your pet, he or she may be able to provide important information that will inform your decision.

Regardless, if you have marijuana of your own at home, make sure to safely secure it from your dog — you certainly don’t want your dog eating marijuana.

Have you ever treated your dog with cannabis? What were your experiences? We’d love to hear from you in the comment section below. 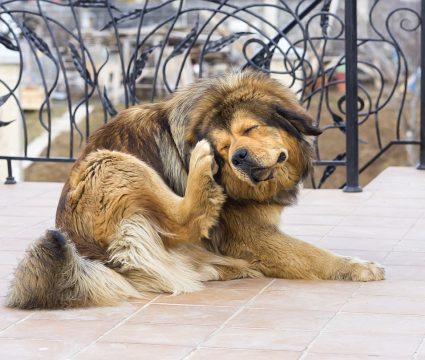 Apoquel for Dogs: A Potential Solution for Your Dog’s Itchy Skin

I use medicinal cannabis oil (CBD White Widow) for my dogs when needed. It helped our old dog enormously with seizures, loss of appetite, alzheimers and neurological problems. He is happy celebrating old age now and apparently pain free. My sister’s Shiloh shepherd has pannus, and went blind in one eye, the other eye was getting worse. She gives her Golden paste (turmeric paste) and CBD white widow. she regained more eye sight in one eye. My 26 hrs old PRE stallion has arthritis and is not limping anymore and happily moving without pain.

Glad to hear the pups are doing better, Catelijne!
Thanks for sharing your experiences.

THC is a proven neurotoxin to dogs. This article is terrible advice and needs to be redacted.

It’s obvious you didn’t read the article, Dr. Kris. We don’t advise owners to do anything except discuss the issue with their vet.

I am using cannabis for my dogs. I get truly awesome experience. Its too good for fixing many issues.

Hey Ben, thanks for the wonderful article. I give CBD treats to my dogs. They are healthier and better than ever before.