Do you feel stifled when trying to select a new pet from the world’s 340-odd breeds? Do you want a dog with the intelligence, discipline and devotion of a German Shepherd, and the happy-go-lucky attitude, luxurious fur and high energy of a Siberian husky?

Well you’re in luck – a relative handful of breeders produce just such dogs, and they are typically called Gerberian Shepskies. Produced by mating a German shepherd with a Siberian husky, Gerberian Shepskies often exhibit traits common to both species, although some clearly take after one side of the equation or the other.

Gerberian Shepskies at a Glance

In most respects, Gerberian Shepskies exhibit similar physical and behavioral traits to their parent breeds.

Average Height: 20 to 24 inches at the shoulder

Health Problems: Gerberian Shepskies suffer from the same health problems that are common to both breeds, such as hip dysplasia, epilepsy and juvenile cataracts

Gerberian Shepskies often vary based on which parent had a more dominant effect on the dog in question – genes don’t always mix evenly. Nevertheless, they are typically very desirable dogs, with a nice mix of traits and tendencies.

Gerberian Shepskies are typically on the large side by husky standards, but they rarely reach the size of large German shepherds. They can more closely resemble either breed in terms of build; some individuals possess the lithe, delicate build of huskies, while others are built more sturdily, like shepherds are.

Most Gerberian Shepskies have a combination of black and brown fur, but there is quite a bit of variation among these dogs. Some essentially look like slightly darker huskies, while others are almost as dark as black shepherds are. No matter the color, Shepskies have thick, long, double-coats that they shed by the metric ton.

Like both parents, Shepskies possess long noses and large, distinctive eyes. Many have the blue eyes common to huskies, although some have one blue and one brown eye. But while the sky-blue eyes of huskies connote an air of quiet beauty, blue-eyed Gerberian Shepskies tend to have a goofy, comical – almost unbalanced – look.

Their appearance may be intimidating to those who are not comfortable around dogs, but few people who are comfortable with canines would describe them as being imposing.

The large, erect ears of Shepskies give make them appear as though they are on perpetual alert, but their ever-wagging tails help soften their overall aesthetic. Further, while their fur makes them look larger than they truly are, but they lack the blocky head, broad shoulders and thick build that characterize pit bulls, mastiffs and other “scary” breeds.

Gerberian Shepskies exhibit a range of personalities, depending upon which of their parent’s genes they inherited in greater proportion.

You could also say the same thing about any breed, but the difference in personalities between a shepsky’s parents is far greater than that of almost any other breed’s parents (some other cross-breeds, such as labradoodles, also have parents with much different personalities).

The parents of most purposely produced dogs are usually members of the same dog breed. Shepskies, on the other hand, are the product of two rather distinct gene pools, which each have their own traits and tendencies. On top of that, they’re also subject to the same personality variability that all dogs have.

Shepskies that take after their shepherd parent are typically very intelligent, loyal and focused; those who more closely resemble their husky parent are usually loyal and affectionate, but they are more difficult to manage and prone to wandering off if allowed off a leash train.

And this is what you would expect: Whereas shepherds want to work with their owner, huskies have places to go, things to smell and small critters to chase. German Shepherds are known for being some of the world’s best guard dogs, but most huskies greet strangers like long lost friends – this means that some Shepskies are more suspicious of unknown people than others are.

Most Gerberian Shepskies are friendly with children and will fit right into your pack. In fact, because of their high-energy ways, bigger families are probably better suited for these dogs than small families are – it takes a village to tucker these things out.

Unfortunately, the Gerberian Shepsky is the product of two breeds that are notorious for their propensity to shed heavily, and they seem to take pride in leaving a layer of fur on everything they touch.

You can take your shepsky outside and brush him regularly, which will help reduce the amount of hair floating around your home, but you’ll have to accept the fact that these dogs shed profusely. Accordingly, they are not ideal dogs for people with serious dog allergies, unless you plan to vacuum every 15 minutes.

Given that they are produced by high-energy parents, it isn’t shocking to learn that Gerberian Shepskies need a lot of exercise.

You should always increase the duration of exercise gradually, but most Shepskies are willing to run for miles at a time. Many owners report that their Shepskies never seem to run out of energy – they may accompany you for your morning run, come home and play with the kids for hours and then start chasing squirrels once everyone else is tired.

If you don’t provide these dogs with enough exercise, they are guaranteed to get into mischief, and given their large size and determined nature, simple shenanigans can quickly cause significant damage to furniture and other belongings. Always keep a number of safe, chewable toys on hand to keep your pup occupied and stimulated.

Have you ever owned one of these endearing cross-breeds? Which parent did yours take after, the shepherd or the husky? We’d love to hear about your experiences in the comments below. If you’re interested in other options, make sure to also check out our breed profile on the Sheprador (the German Shepherd x Labrador mix) 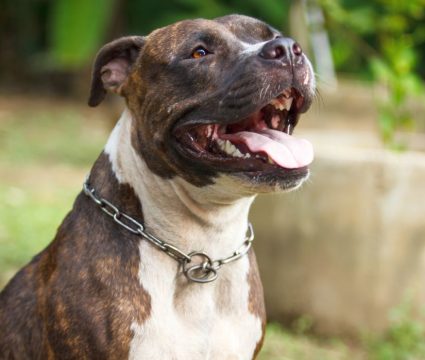 Types of Pit Bulls and Bully Breeds: A Comprehensive Look

Hi!!! I have two shepskys from the same litter 🙂 the female, aspen, is white with one blue eye and one brown. She takes after the husky parent more as she is smaller in frame and more mischievous. Onyx, my male, is black with cute, tan, comma shaped eyebrows. He is much bigger(stalky;big paws) and takes after the Shepard parent. He is very attentive and always protects his sister. They absolutely adore every dog they meet and never mouth off. They are the best dogs I’ve ever had! So much fun 🙂 and since there’s two of em, they keep each other entertained. Much love

They sound fantastic, Blakeley!
Thanks for telling us about them!

Thanks for the enlightening article. To my supprise, my husky gave birth last week to four Shepski’s. Two look their father, an Eastern European Shepherd (though he’s in denial), an the other two look like my female Malinois (go figure). It sounds as though I may be in possession of the four puppies of the apocalypse! In any case, they will receive love and training.