How to Get Rid of Skunk Smell on a Dog? 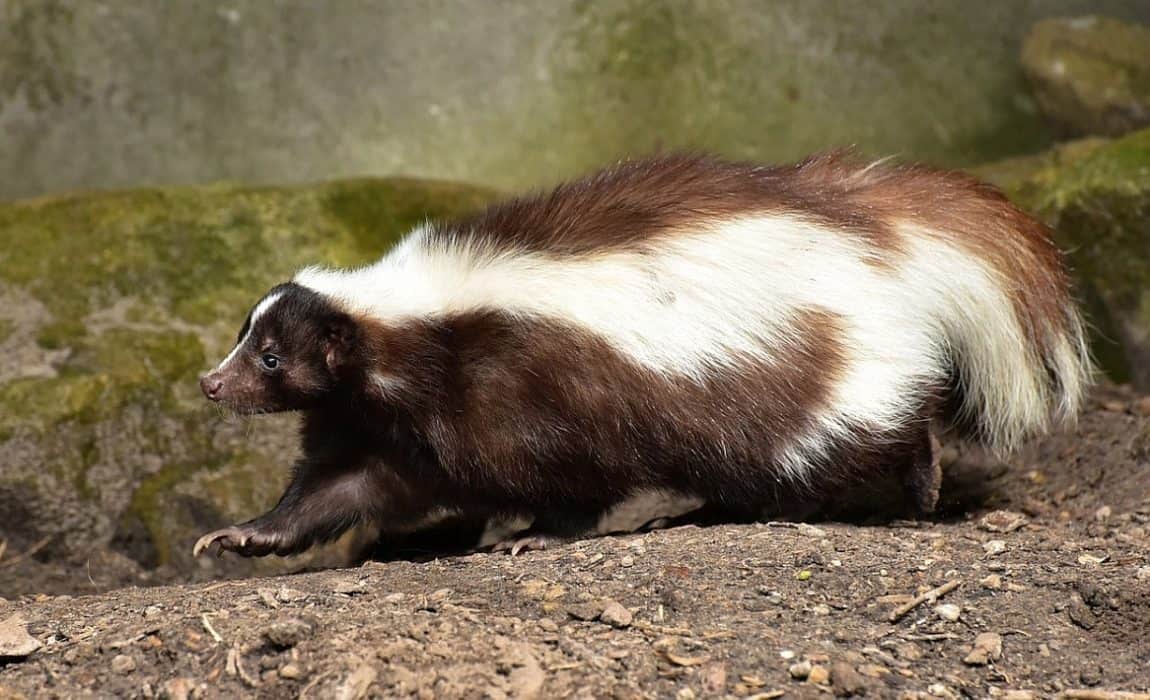 More than one dog owner has smelled the acrid odor of Skunk de Canine. It’s not a pleasant aroma, and you’ll likely want to deal with that situation as quickly as possible.

Fortunately, skunk spray odors are relatively easy to neutralize – as long as you use the right chemicals to do so. Many of the old remedies, it turns out, don’t work.

In fact, the real dangers presented by skunks are far more troubling than their odorous discharges. And while you needn’t fear them, it behooves all dog owners to understand skunks and the potential risks they present.

But in case you’re standing with your phone in one hand and your freshly sprayed dog in the other, we’ll get to the heart of the question first.

Although you may think that some type of exotic chemicals or voodoo is involved in creating such a nauseating scent, the chemical constituents of skunk spray are fairly common. They’re called thiols, and they’re created by attaching a run-of-the-mill sulfur molecule to an equally unspectacular oxygen molecule.

In fact, these are very similar to the chemicals present in tasty (if smelly) things like garlic, onions, and shallots.

Three thiols in skunk spray are responsible for the eye-watering odor. However, there are three additional chemicals — called thioacetates – that are also contained in some skunk sprays. These chemicals don’t cause much of an odor in normal circumstances, but if you do the wrong thing, that can change.

And by doing the wrong thing, we mean getting your dog wet. It turns out that if you add water to these thioacetates, they change chemically, turn into thiols, and start to stink. So, spraying your freshly-skunked dog with water is definitely not a good idea.

Instead, follow the steps outlined below to help eliminate the odors.

Note: There are a few different skunk species native to the US, and each one has a slightly different combination of active ingredients in their spray. Spotted skunk spray, for example, does not possess the thioacetates that striped skunk spray does. However, the same neutralizing substances will work no matter what type of skunk sprayed your dog.

The trick to getting rid of skunk stank is to use chemicals that will bond with the thiols. This will neutralize the odor and let you wash the offending chemicals away.

A lot of owners try to use vinegar or tomato juice to get rid of the smell. But, according to VCA Hospitals, neither of these old-school remedies work. They’ll just create a huge mess, they won’t neutralize the skunk spray and they’ll generally make the problem worse.

Instead, you’ll want to use some baking soda, some hydrogen peroxide, and a bit of dish detergent. A common recipe calls for:

But before you get started, move your pup to your bathtub or (preferably) a dedicated dog bathing tub – you will need to use the neutralizing mixture immediately after making it to ensure its efficacy. Grab an old towel or two, the hose (or your dog’s shower attachment) and anything else you may need.

Once you’re ready to get to work, mix the peroxide, baking soda, and soap in a bucket. While it is still fizzing, start pouring/rubbing/sponging the mixture on your dog’s fur. Work it in as much as you can and then start hosing your dog down.

The peroxide and baking soda will neutralize the thiols, while the soap will work in conjunction with the water to help wash away most of the oil.

However, you must use care with this recipe: Never get peroxide near your dog’s eyes, nose or mouth. This can be a bit of a problem for dogs who get blasted in the face by skunks, but you don’t want to make matters worse by irritating your dog’s mucous membranes.

It’s also important to note that peroxide may bleach your dog’s fur. So, your black lab may end up resembling a chocolate lab for a few months until she replaces her bleached coat with fresh fur. This isn’t a big deal for dogs whose sole job is to be the family pet, but it may force show dogs to stay on the sidelines for a while.

One more thing: Don’t store any leftover solution – just pour it down the drain. Bottled peroxide-and-baking-soda mixtures can explode in some cases.

Fortunately, there’s another solution that isn’t likely to irritate your dog’s eyes, nose or mouth, nor bleach her fur.

While the homemade skunk-neutralizing spray will help you eliminate the bulk of the odor, it isn’t an ideal treatment. It not only presents the potential hazards mentioned above, it rarely works completely – you’ll often notice that a mild skunk odor reappears anytime your dog gets wet over the next few months.

But there are a number of commercial skunk spray neutralizers available, which do not present these types of problems. For example, Nature’s Miracle Skunk Odor Remover is just such a product and most owners who’ve tried it report that it works very well on recently sprayed dogs.

The problem is, relatively few owners keep this type of product on hand. So, take a moment and order a bottle now. Hopefully, you’ll never need it, but it’s nice to know you have it ready if the need arises.

Avoiding Skunks from the Get Go: The Best Strategy

Skunks can cause a few problems for you and your dog, and you’d be wise to do your best to avoid encounters with them whenever possible. You needn’t fear skunks, but you should heed that black-and-white warning coloration they display.

Obviously, skunks are famous for the obnoxious odors they can emit. Any 5-year-old who’s seen Tom and Jerry knows this. But as you’ve seen, that’s a relatively minor problem to correct, and there’s nothing inherently dangerous about it. In most cases, your dog (and your nostrils) will recover.

But the odor isn’t the only problem skunks represent: Skunks are also ferocious little predators, equipped with teeth and claws similar to those of a large, angry cat.  And while they aren’t aggressive in any way, shape or form, they won’t hesitate to defend themselves with every sharp weapon at their disposal.

This isn’t likely to be an issue if the skunk sees your dog coming. Skunks usually engage in a little warning display before spraying. This usually involves stamping their feet and then adopting a handstand-like posture. If this doesn’t repel the perceived threat, they’ll begin spraying copious amounts of musk at the attacker.

You can see this warning display below. Don’t worry – no break dancers were harmed in the shooting of this video.

But if your dog manages to sneak up on a skunk or evade the initial spray, she could end up grabbing the little black-and-white menace and sustaining a serious bite or scratch in the process.

So, you’ll want to always keep your dog leashed and keep an eye out for skunks when walking through rural or suburban areas.

But the resulting scratches or scrapes aren’t even the biggest problem: Skunks are one of the

Hopefully, your dog has already been vaccinated against rabies, which should prevent her from contracting the disease. However, you’ll want to call your vet anytime your dog tussles with a skunk. Even vaccinated dogs may need to be placed under a 45-day observation period in some cases.

But, it isn’t hard to imagine a situation in which you encounter a skunk with your dog, and in your efforts to separate the two, you end up with a scratch or bite. You probably haven’t been vaccinated against rabies, so this means you’ll want to visit your doctor ASAP for post-exposure prophylaxis.

Rabies isn’t especially front-of-mind in the US, but it is important to understand that the disease is almost always fatal without treatment, so it is no laughing matter. Fortunately, most skunks will get out of your way if given the chance, so you can avoid most such encounters by simply remaining observant and aware of your surroundings.

Don’t panic if you encounter a skunk, just calmly back away. Once the skunk has moved off, you can head back down the trail.

Have you ever encountered a skunk while walking your dog? Has your dog ever shown up on your back porch coated in a stench so bad that you couldn’t stand it? How did you deal with the problem? Did you use a homemade neutralizer or buy a commercial version?

Let us know about your experiences in the comments below!

I have a cockerspaniel that got sprayed in the face from a skunk,I have tried just about everything to get rid of the smell because it is on her face I don’t want to hurt hèr.can u suggest anything that would help? It’s been a month since it happened.
Thankyou