K9 of Mine is reader-supported, which means we may earn a small commission through products purchased using links on this page. Here’s how it works . 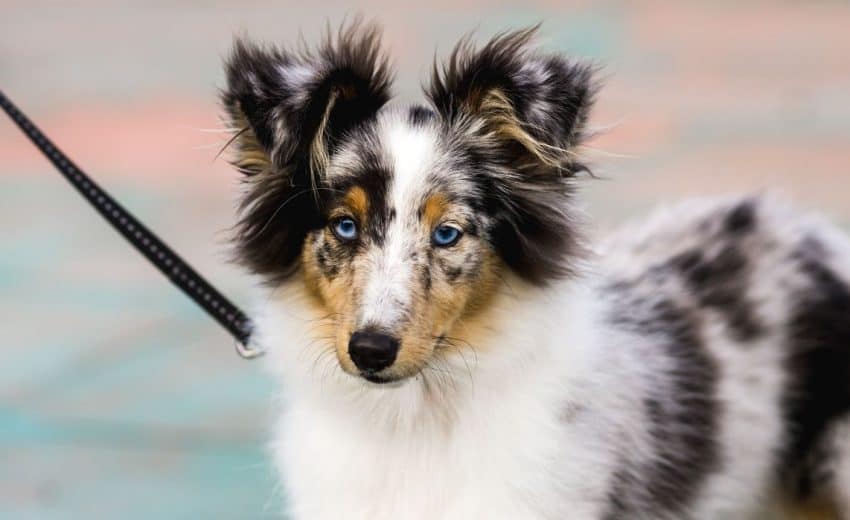 Merle, dapple, adorable — whatever your name for it, there’s no mistaking this eye-catching coat pattern.

Generally characterized by a coat full of dots and dark-colored swirls on top of a lighter base color, merle is an in-demand look in the dog world.

There’s the joyful mix of blue, black, and white commonly seen on Australian shepherds, as well as the smoky look popular among pit bulls.

Come explore this stunning yet mysterious coat pattern and some of its wearers with us.

The merle gene is more than just a coat pattern, as it affects everything from skin color to hearing and more.

One merle pup may have cute, multi-colored nose and toe beans with a relatively plain coat, while another might have different colored eyes and a magnificent coat of browns and grays. It’s little wonder why people can’t get enough of these cuties.

While the look does have obvious appeal, it does have drawbacks. Merles should never be bred together as serious issues may arise. These double merle pups have a high rate of deafness and eye problems.

Spotting a merle isn’t always easy, either. There are so-called cryptic merles in the gene pool, making genetic testing a must before breeding to avoid problems.

A multitude of Merle Dog Breeds

Now that you have the scoop on all things merle let’s check out breeds that frequently carry the gene.

The most notable merle pupper is the Australian Shepherd or Aussie, a lovable, high-energy pup who dominates the agility scene with his bounce and enthusiasm.

Say hello to this adorable little friend. Usually referred to as dapple in the breed, merle is found in the world’s smallest doggo, too. A pint-sized pup with a big-dog attitude, chihuahuas make wonderful lap dogs and watchdogs.

Easily recognized as the corgi with a tail, merle Cardigans are in high-demand.

A boisterous pup affectionately called Cardis (not to be confused with the rapper, though they do have a cool bark) this pupper got his start in herding, believe it or not. This makes him an excellent candidate for agility.

What a cute floof! While most of us usually think of the traditional sable sheltie, blue merle pups appear as well. A high-energy honey with a strong desire to please, shelties excel in obedience and agility competitions.

That long, flowing coat does require some heavy-duty grooming, however, so take that into account before scooping one up.

An all-American hunk with strength and a thirst for adventure, the Catahoula is known for his striking good looks.

Bred as a hunting dog, Catahoulas are excellent jogging companions. They do require early socialization and training, however, to avoid serious behavioral problems.

Like Chihuahuas, the merle coloring is referred to as dapple in dachshunds. A handsome hound with a big personality despite his stumpy legs, the dachshund is a great companion.

His build doesn’t allow him to be a traditional athlete, but that doesn’t stop him from being the obedience class clown.

A sleek variation of collie, the smooth collie offers all the fun and playfulness of their rough-coat counterpart without the mountain of fur to worry about.

These canine athletes are a fixture on the agility circuit and make incredible hiking and jogging buddies. Regular exercise is a must to keep naughtiness at bay, however.

A relatively rare cutie from Down Under, the Koolie is a scrappy breed who isn’t afraid of a little fun in the sun.

He got his start in herding livestock, so he has as much energy and drive as the Energizer Bunny, making him an all-star athlete. Like similar breeds, the Koolie needs to stay busy to prevent destructive behavior.

Pitties come in all sorts of colors — including merle. He’s an active breed that needs a great deal of exercise to stay out of trouble, though he’ll happily transform into a house hippo to snooze on your sofa between runs.

A French herding dog that also has a background in police work, the Beauceron is a working breed to the bone.

He lives to please his owner and does best in an environment where he’s always busy. He’s a natural guard dog and is reserved with strangers, so early training and socialization are required.

Like the Aussie, the Border collie is a regular on the agility scene. He’s another shining star of the merle look, the breed one of the most common carriers of the gene.

He seems to beast every task in front of him, from dock jumping to herding to obedience. Because of this high level of intelligence and athleticism, he needs daily exercise (both physical and mental) to remain happy and non-destructive.

A gargantuan merle carrier, the Great Dane is the largest dog breed with an even bigger heart. He started off as a hunting dog in Germany, though today, he’s more likely to be hunting treats on your countertops.

He’s very much a gentle giant, and while he needs regular exercise to keep trim, avoid overdoing it to prevent joint issues.

A tiny spitz with a foxy personality, the Pomeranian is a beloved companion and surprisingly effective watchdog. He’s naturally feisty and alert, making him unafraid of sounding the alarm at the slightest noise.

His thick coat does need regular upkeep to stay stunning, though his exercise needs can be met with a daily walk.

Isn’t merle a majestic coloring? Do you own a merle pup? Tell us about your pooch in the comments below (or share photos via our uploader)! We’d love to hear about your merle fur baby. 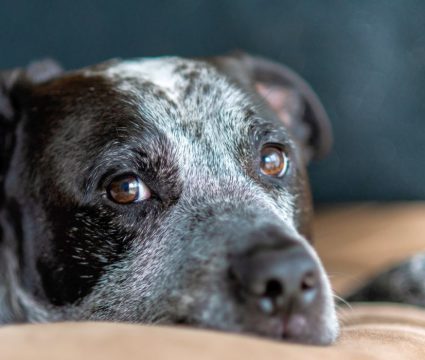 Chihuahua, pitbull, and Pomeranians don’t have Merle coats if they do they’re badly bred and byb(back yard bred/breed) please don’t get the idea that they are natural Merle

Hey there, Frog.
It depends on what you mean by “natural.” We (people) have made all of 3,000-odd dog breeds what we want — it’s not as though we captured a herd of Chihuahuas from the wild and started a breeding program.
Also, we’d argue that displaying merle coat doesn’t necessarily imply poor breeding.
But thanks for sharing your thoughts!

A well detailed and useful article. Thank you for sharing,
it’s definitely going to help lots of people out there.
You always publish handy info, some of which I share
on Fb.

What type of dog is in the first picture??

I have a blue Merle Pomsky and she is just an amazing pup. I can’t seem to post a pic here, but her name is Mia and she has her own Instagram @miapomsky907 and she just might be the cutest dog in Alaska :o)
Merry Christmas and cheers from Kodiak Island!!!