Dog Zoomies: What Are They and Why Do They Happen?

Picture it: You’re relaxing on the couch with your best fur friend, enjoying the Puppy Bowl when suddenly he decides it’s the perfect time to imitate a bullet train around the house, running here, running there, and basically running everywhere.

As pupper parents, we’ve all witnessed these random bursts of energy, commonly called zoomies. These surprise spurts can be startling, but they’re a normal part of canine behavior.

Let’s learn more about dog zoomies together and see what all that running is about.

Technically, zoomies are called Frenetic Random Activity Periods or FRAPs, which is more than fitting since a zooming pupper looks like he’s had one too many frappuccinos.

Generally, a classic case of zoomies is marked by a sudden, unexplained burst of running or spinning.

On the off chance that you’ve never seen zoomies, we offer you exhibit A:

FRAPs can be more common in some breeds than others, such as high-energy woofers like border collies and shepherds, or they can be linked to your pup’s personality, with more active doggos experiencing them more frequently.

Zoomies are hardly a canine-exclusive behavior, either, as cats, horses, and even elephants — yes, elephants — exhibit FRAPs.

Just note that — although the two look somewhat similar at times — zooming isn’t the same as tail-chasing.

Why Do Dogs Get the Zoomies?

The exact cause of zoomies can be a mystery, and they can happen at random. But at other times, you’ll find it possible to link them to a part of your pup’s normal routine.

They may be triggered by pent-up energy that your dog releases at once, like when he’s let out of his crate or kennel after a period of rest. They may be excitement-based, too, such as a dancing doggo anticipating a walk.

Regardless of why your fur friend is flexing his zoomie muscles, he’s sure to have a blast while doing it, and it is exercise, which is always a bonus.

When Do Dogs Get the Zoomies?

Zoomies can be a sudden occurrence, as we mentioned above, but certain activities can trigger them, including:

But mature dogs can experience them, too! In fact, my 11-year-old Chihuahua, Batman, is a professional zoomer and out-zooms everyone, including the much-younger pitties and kitties.

Here the little zoomer is, in post-zoomie-collapse-and-recovery mode.

Are Zoomies Bad? Should You Stop Your Dog’s Zoomies?

Zoomies are a natural canine behavior and aren’t “bad” or a form of acting out that needs correction. It’s just your doggo’s way of letting out some energy.

There is a time and place for zoomies, however, as no one wants a zooming bullmastiff anywhere near their prized porcelain collection. Not only can your pooch possibly hurt himself (and your belongings!) by zooming in a cluttered area, but zooming inside on slick flooring can lead to injuries.

If you know an activity triggers zoomies, try to take your pup outside where it’s safe to run.

You can try to mitigate zoomies by increasing your dog’s exercise with an extra daily walk or run.

You can also implement indoor fun, such as with interactive dog toys, especially if it’s a time when he can’t be outside much to exercise, like during winter or rain.

That said, if your dog is zooming more often than usual, a vet appointment is a good idea to rule out medical and behavioral issues. The sudden surge in energy can (rarely) be linked to medical problems.

What Should You Do While Your Dog Is Zooming?

There’s no need to panic when the zoomies hit. They’re an itch you’re better off letting your dog scratch naturally. Most of the time, they last less than five minutes, and as long as your dog is in a safe space where he can’t run off or run anyone over, he’s good to go.

Your best bet is to supervise and enjoy the canine Olympics. Feel free to add airplane sound effects for maximum entertainment.

Remember: If you need to get a hold of your dog mid-zoomies, don’t chase him! He’ll think you’re playing and only run faster.

Most doggos can be wrangled in by calling them, but if your dog struggles with listening to you outside, you may want to keep him on a lead, even at an enclosed space like the dog park.

Can You Predict Dog Zoomies?

Zoomies aren’t always predictable, but sometimes you can recognize common triggers in his routine, as we chatted about above. Learning them can help prevent any oopses that may come with zoomies, like tipped over furniture.

Your dog may show warning signs before he zooms, such as sudden pawing and/or digging at his bed or furniture and play-bowing.

Intervening here with a yummy treat or toy as a distraction can prevent FRAPs until you get him outside to stretch his legs where he won’t create havoc.

Being the bizarre phenomenon that they are, zoomies raise a lot of common questions among canine owners. We’ll answer a few of the most common queries below!

Why do some dogs run in circles suddenly?

Dogs often run in circles when they’re experiencing “zoomies,” or FRAPs (frenetic random activity periods). They’re nothing to worry about and completely normal.

If my dog is running in circles, is he having a seizure?

Canine seizures can cause some unusual symptoms, but generally speaking, zoomies are pretty easy to recognize. If your dog acts normally (aside from the crazy running) and appears to act normally once the zooming-urge has passed, he’s likely fine.

Nevertheless, don’t hesitate to contact your vet if you suspect he’s having a seizure, there’s anything unusual about your dog’s zooming behavior, or if you just think something is “off.”

You don’t want your doggo to bump his noggo while zooming around, so try to prevent them from happening in cluttered or small areas.

But out in the open, with nothing around to hurt him? Nah — let the good boy have his fun.

Why does my dog run around erratically after baths?

Running erratically — often called “zooming” — is common after baths. No one knows exactly why dogs feel compelled to do so, and not all dogs get the zoomies after baths. But the after-bath-toweling-off period is one of the most common times they occur.

Zoomies can be a handful, particularly if your four-footer is on the bigger side, but remember that it’s just his way of burning off steam and having fun. The next time he zooms, sit back and appreciate his Usain Bolt impression.

Does your doggo get the zoomies? How often? Any epic stories? Let us know in the comments! 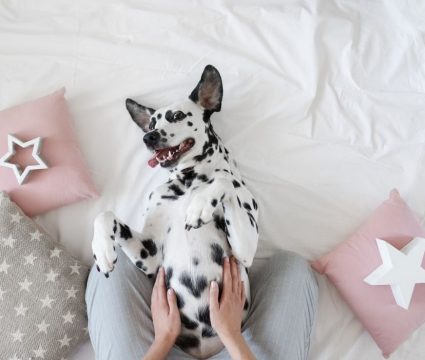