Giardia in Dogs: Can My Dog Give Me Giardia? 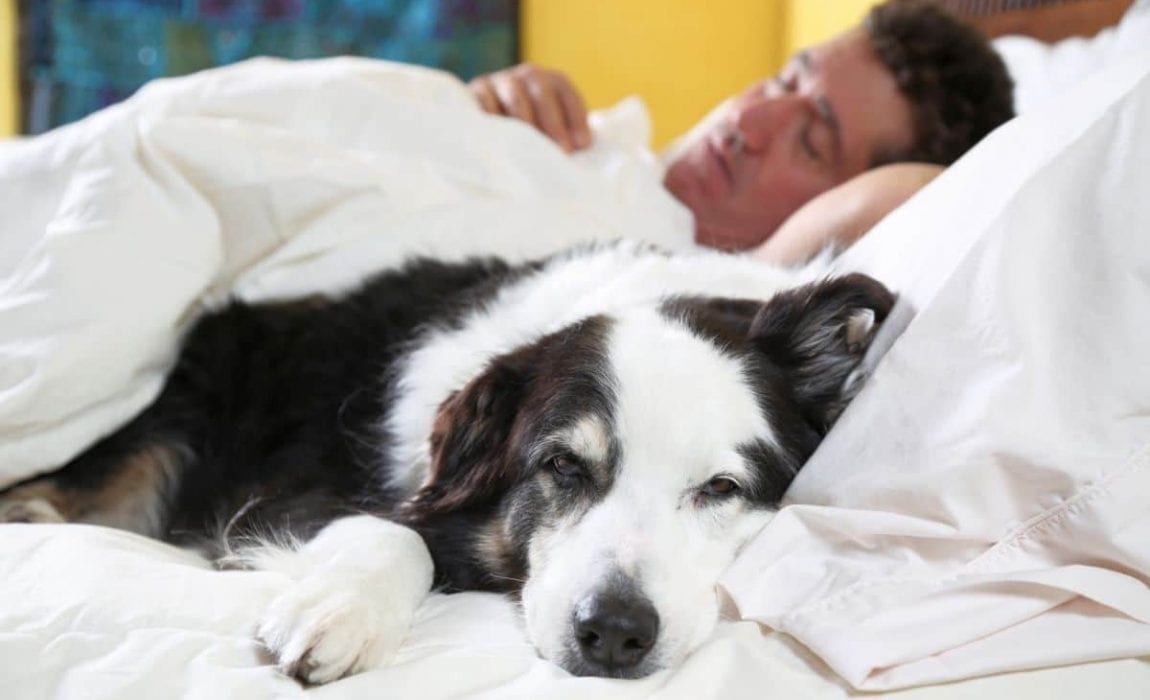 Taking care of a sick puppy can be an exhausting experience.

You may end up needing to go to the vet multiple times, administer medications she doesn’t want to take, and prepare special meals that help her feel better while she’s ill.

You may even need to keep her confined to a crate while she recovers or carry her outdoors when she needs to go to the bathroom.

Most owners are willing to do these things to take care of their furry friend, even if they aren’t very fun. After all, most of us consider our dogs to be members of the family, and that’s what you do when a family member gets sick.

But just like human relatives, sick pets can occasionally get their caretakers sick. And this includes giardia – a problematic parasite that commonly infects dogs. Giardia doesn’t usually cause serious illness, but it is not something to be taken lightly.

We’ll talk about giardia, the way it infects dogs, and how it is transmitted to people below.

Giardia is a type of single-celled organism called a protozoan. In fact, the term giardia describes between six and 40 different species, depending on the authority you consult.

Giardia has two basic lifecycle phases. Mature organisms look a bit like tiny octopi, as they have a head region and several tiny flagella used for locomotion.

Before leaving a host’s body, they enter the second phase of their lifecycle, called a cyst. These tiny cysts are incredibly tough and resilient, which helps them to survive in the outside world.

Giardia typically lives in the intestines of infected animals. Many different species can be infected by giardia, ranging from beavers to cattle. It can also infect domestic dogs, cats, and humans.

Giardia is transmitted via the fecal-oral route, meaning that the infected animal passes on cysts in their waste, and new animals become infected when they ingest these cysts in contaminated food or drinking water.

What Symptoms Does Giardia Cause?

Giardia causes exactly the types of symptoms you’d expect an intestinal parasite to cause.

Signs of infection include:

How Do Dogs Get Giardia?

Giardia is quite widespread in the environment, and it is very easy for the microorganism to infect dogs.

Because it is spread via the fecal-oral route, dogs can get it from licking, chewing, or eating anything that’s been contaminated with cysts. It’s actually kind of surprising they don’t get it more often.

Your dog may get sick by simply licking or chewing the wrong patch of grass. Or, she may drink from a puddle or pond that’s been contaminated with the organism. She could also get it by suckling from dirty teats or getting a bit too close to an infected dog’s rectum while doing the whole butt-sniffing thing.

How Do People Get Giardia?

People, on the other hand, do not normally lick grass or smell butts as casually as dogs do. Instead, most people get giardia from drinking unsanitary water. This means that it is typically quite common in the developing world, and somewhat uncommon in the developed world.

A lot of people actually contract the illness by not properly treating water while camping in backcountry areas (beaver ponds are notorious for containing giardia organisms, but even manmade ponds and pristine rivers can serve as a source of infection).

Many people also contract giardia due to poor hygiene practices. For example, a sick food worker may not wear gloves as well as not wash his or her hands before making your burger and fries. When you later eat the food, you end up ingesting infective cysts.

Giardia can be zoonotic, which means that it can be transmitted between animals to humans. This means that your beloved pooch has the ability to spread giardia to you.

People catch giardia from dogs in the same general way that the infection is normally contracted.

Essentially, your dog will expel cysts in her waste, and you’ll inadvertently get some of these cysts in your mouth.

Consider, for example, the following scenarios showing how human infection could occur:

There are dozens of other possible scenarios in which your dog could give you giardia. Fortunately for pet owners, pet-to-person transmission isn’t terribly common.

So yes, you can get giardia from your dog licking you, but it’s pretty unlikely. Most human cases of giardia occur from drinking contaminated water.

Some authorities report that the primary giardia species that affects dogs is not the same one that normally makes humans sick, but other trustworthy sources contradict this notion.

In either case, it is better to be safe than sorry and assume that you can catch giardia from your dog.

Fortunately for you and your pet, giardia is often rather easy to treat. In fact, the same drugs are often used to treat dogs and infected humans suffering from the intestinal parasite.

The two primary drugs used to eliminate giardia are:

These are both common medications that are used to treat various roundworms and protozoans, respectively. They’re both largely safe, and they’ve been used for decades.

It may also be necessary to prescribe medications to help eliminate nausea or diarrhea, and some animals (including two-legged ones) may require IV fluids if they’ve become dehydrated.

Most people and pets in good health will recover from giardia within a few weeks.

However, those who are suffering from other health problems, especially those that result in compromised immune systems, may suffer more serious complications. Extremely old and extremely young people and pets are also at increased risk of serious illness or even death.

If you bring your dog in and your vet suspects giardia, he or she will ask for a fecal sample and will want to run tests to have your dog’s stool analyzed.

After confirming giardia is the problem, your vet will prescribe the appropriate medication and request that you return in a few weeks. At this point, he or she may order a follow-up stool analysis to ensure the infection has cleared.

Nightmare fuel courtesy of Wikipedia. This is the small intestine of a giardia-infected hamster. Every one of those little octopi-looking things is a mature giardia organism.

Preventing Giardia in Dogs (As Well As Yourself)

Giardia may be relatively easy to treat, but it’s no fun for people or pets to experience. Accordingly, it is better to try to avoid catching the illness in the first place.

To that end, make sure you incorporate the following practices:

Giardia is certainly not a fun illness for dogs or people, but most healthy individuals will recover after receiving treatment. Just be sure to employ the preventative measures explained above and be sure to visit your vet anytime your dog has diarrhea that lasts longer than a couple of days.

Has your dog ever contracted giardia? How did your vet treat the illness? Did your pup recover quickly or spread it to other members of your family? Let us know in the comments below. 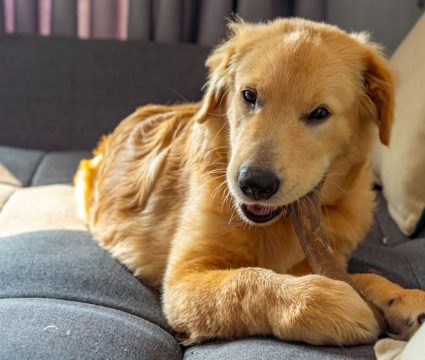 Help! My Dog Swallowed a Rawhide! What Do I Do?

I adopted a puppy in early September 2014 who ended up having giardia and another parasite. She had to be treated for several months before fully recovering. Around November 2014 my boyfriend who lived in the home began displaying symptoms of a bloated stomach and constant vomiting due to fluid build up which ended up being ascites. The Dr. treated him with anti nausea medication which helped some, but he had violent bouts of nausea for months. I asked him to let his Dr. know he may have been exposed to giardia, but don’t know if he did. He ended up passing away in October 2017 from complications of cirrhosis of the liver. Alot happened between 2014 and 2017 and I don’t know if he became sick because he was a closet alcoholic or ended up becoming an alcoholic to make death happen faster as he told me shortly before he passed. We were together 10 years and lived together for 7. I never suspected before he was obviously abusing alcohol after becoming that he was an alcoholic.
I’ve read alot about cirrhosis, ascites, liver failure and giardia trying to make sense of what happened. I’ve read that while it’s rare, humans can contract giardia from animals. It appears in most documented cases that people recover after being treated, but in developing countries it can cause the young, old and those with weakened immune systems long term issues. There’s some research that suggest there could be a link between giardia and liver issues as well as a coexistence with some cancers, but It’s unknown whether giardia can cause a coexistence cancer. There’s also a study I read recently that stated a giardia infection can cause ocular problems which he also experienced within 4-5 months of being exposed to giardia.
There’s no way to ever know if giardia played a part and if it did what that part was in what happened to him, but the timing of when he became sick in relation to our puppy having giardia and the health issues he experienced that could be possibly have been caused by giardia shouldn’t be ignored.

Hey there, J. We’re so sorry to hear about your boyfriend’s passing, but we appreciate you sharing his story with us.
Please update us if you’re ever able to learn more about a possible connection between his condition and giardia.

My dog has giardia. I’ve had him to the vet twice and each time she provides meds for him. the first time
it cleared up in a few weeks. Now he has it again. Gave himthe perscriptions from the vet and have to wait three week to have him retested.
what are the chances it will clear up this time.
Mike

Hey, Michael.
First, for clarity: Our consulting veterinarian did fact-check and approve this article, but I am not a vet.

It seems odd to me that the little buggers have come back, if they were truly cleared from your pup’s system. Is it possible he’s being repeatedly exposed to a contaminated source of water?
I’d ask your vet for his or her opinion regarding the resurgence, and make sure to prevent your dog from drinking any questionable water sources (including lakes and rivers while walking, etc.)

But if the meds worked the first time, I’d (personally) bet on them working again.