The Moscow water dog, though now extinct, was once a fluffy four-footer that eventually led to the creation of the Black Russian Terrier.

You won’t find any of these unique dogs today, but we’ll share some of the traits of these mysterious mutts below and explain the breed’s short lived history.

History of the Moscow Water Dog

The creation of the Moscow water dog was originally commissioned by the Russian government and navy. In doing so, they hoped to create the ultimate rescue dog.

The idea was to select a few of the biggest dog breeds around (that also displayed the traits necessary for the job), and combine them into one super-swimming, water-rescue pup.

This meant mixing the gentle nature of the Newfoundland, with the work ethic, power, and bravery of the Caucasian and Eastern European shepherds.

But these dogs weren’t created by run-of-the-mill dog breeders; because they were slated for very important work, the breed was only produced by the state-operated “Red Star Kennels” under the command of Colonel G. P. Medvedev.

As expected, the Moscow water dog had an ideal fluffy double-coat that was perfect for cold water and inclement weather. But unfortunately, the breed picked up some of the more aggressive tendencies from the east European shepherd.

Ultimately, the Moscow water dog was more likely to bite drowning victims than rescue them. Hence, the breed was never fully realized and went extinct in the 1980s.

However, some of the breeds produced by this program are still around today, including most notably the black Russian terrier. This intelligent and powerful dog still has some Moscow water dog genes in his dog DNA.

While some of the physical details of the Moscow water dog remain unknown, we can guess that he was probably somewhere in between 110 and 140 pounds. This large dog was most likely 26 to 30 inches tall when full grown based on the heights of the parent breeds.

These dogs likely had a fairly agile, athletic build due to their intended jobs, but you might have had difficulty seeing it buried in the thick, fluffy, double coat of these cold-proof canines. In fact, the undercoats of these dogs were likely super thick to help insulate them from the cold water.

It’s reasonable to suspect that these dogs may have had webbed feet, like their Newfoundland ancestors. But unfortunately, this just isn’t clear.

Based on the Moscow water dog’s Newfoundland parent, the dominant colors of the coat were likely brown or black. However, the varied genetic history makes other colors, like grey, white, or sable coat combinations possible.

Due to the Moscow water dog’s large insulating coat, these dogs probably shed a ton, and their coats likely required frequent grooming to stay in the best shape possible.

The Health of the Moscow Water Dog

Due to the Newfoundland blood in his pedigree, these dogs might have experienced health issues like cardiovascular problems, Addison’s disease, and hypothyroidism. Meanwhile, their Caucasian shepherd dog ancestors may have predisposed Moscow water dogs to cataracts.

Based on the breed’s large size, these dogs were likely subject to issues like joint pain and hip dysplasia, as well as gastric torsion (bloat) too. They would have probably also been slightly susceptible to weight gain, were it not for their active, working dog lifestyles.

The Moscow water dog probably had an average life expectancy 9 to 12 years.

Personality of the Moscow Water Dog

It’s impossible to know the personality of the Moscow water dog, but based on the parent breeds involved, we can guess that this water-loving pooch was bold, hard-working, and intelligent.

Though these dogs were likely highly intelligent, it’s difficult to say whether or not they would be highly trainable due to their projected fearless, independent mindset. The Moscow water dog was probably at medium energy pooch throughout the day, while being ready to spring into action at a moment’s notice.

And like most other working dog breeds, these four-footers were probably happiest while doing their job and staying busy.

Are you still hoping to learn more about these extinct and extraordinary dogs? Here are a few common questions and answers to strengthen your understanding.

Why did the Moscow water dog go extinct?

The Moscow water dog went extinct due to the breed’s (unexpected) aggressive nature when exposed to drowning victims. This dog was intended to be the ultimate water rescue dog, so when the breed was more inclined to bite drowning victims than save them, the project was abandoned.

Can you still get a Moscow water dog?

You can’t find these unique dogs anymore due to the bloodline being extinct. That being said, you can find Newfoundland mixes that have shepherds in their gene pool, which may produce a somewhat similar cross.

When did the Moscow water dog go extinct?

It’s difficult to say for sure, but it appears that the breed went extinct some time during the 1980s. One of the breed’s relatives, the Black Russian terrier, gained international recognition in 1984.

Is the Moscow water dog a Newfoundland?

Though they may look somewhat similar, the Moscow water dog is not the same breed as the Newfoundland. This breed is a cross between 3 other breeds: The Newfoundland, the East European shepherd, and the Caucasian shepherd (also known as a Russian Prison Dog).

Though these big beauties aren’t around today, the Moscow Water Dog helped pave the way for some of the most hard-working fearless dogs you can find. This short-lived breed was a fluffy yet mighty warrior.

Does the Moscow Water Dog remind you of any other breeds? What’s your favorite extinct breed? We’d love to hear all about it in the comments below! 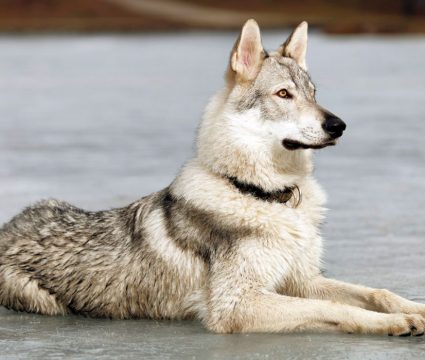