When Do Dogs Stop Growing? Finding Your Pup’s Final Size! 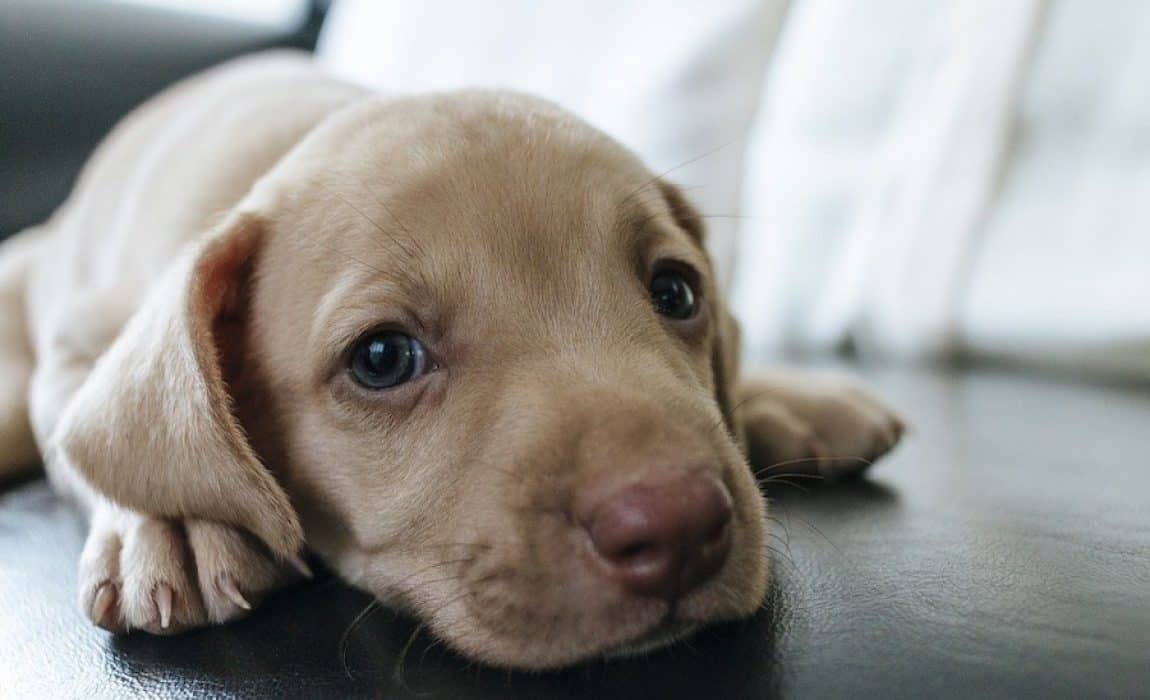 One of the most rewarding things about puppies is watching them grow.

But just like most other mammals, dogs eventually reach their mature size and stop getting bigger.

Large-breed puppies take longer to reach their full size because their larger bones need more time to grow. However, there’s plenty of wiggle room involved, and some dogs stop growing much sooner or later than the 1-year mark.

We’ll talk about these differences and some of the things that influence your dog’s progress from puppyhood to adulthood below.

How Do Puppies Grow, Anyway?

Anatomically speaking, dogs grow in much the same way that human children do – especially as it concerns height.

It’s easy to intuit the growth of your puppy’s muscles and other soft tissues; after all, muscles can grow throughout a dog’s life. Many mature dogs could even “bulk up” if put through an exercise regimen that included resistance training and proper nutrition.

But bones are different. They don’t grow at all during adulthood, and it is harder to envision the way by which they increase in size early in your pet’s life.

Rather than growing in a generalized manner that encompasses the entire bone, the long bones in a puppy’s legs grow from two distinct places called growth plates. Located at each end of the bones, growth plates are relatively thin cartilaginous regions in which new tissue is created.

The growth plates are somewhat flexible and soft during puppyhood when new tissue is being formed.

As the new tissue ages, it hardens and calcifies, eventually becoming bone. When the growth plates have stopped producing new tissue and become completely calcified, they are said to have “closed,” which means that they’ve stopped growing and the bone has reached its final size.

Growth plates are actually somewhat fragile and vulnerable to injury. So, it is important to prevent young puppies from engaging in excessive amounts of exercise, which may damage the growth plates. It’s also a bad idea to let pups jump great heights, such as onto or off of the couch.

It turns out that small dogs stop growing sooner than large dogs do.

This makes sense, as large breeds grow much more between the day they’re born and the day they stop growing than small breeds do.

Consider, for example, that Chihuahua puppies are born weighing about 5 ounces, and they reach about 5 pounds or so at maturity. This means they increase their size by a factor of 15.

On the other hand, a Great Dane puppy weighs about 1 pound at birth and 100 pounds or more at maturity.

This means that they exhibit a 100-fold difference in size over the course of their lives (and 200-pound Great Danes experience twice this much growth!).

Because it takes time to convert food into new tissue, large breeds must continue to grow over a longer period of time than their smaller counterparts.

On average, small breeds typically stop growing by the time they reach 6 to 8 months of age, but giant breeds grow until they are 12 to 18 months old.

Larger breeds can end up costing quite a bit more, as a perfectly sized puppy bed won’t last too long with a young Newfoundland.

This is also something to keep in mind with selecting a crate for your pup – you may be better off opting for a larger-sized crate and using dividers to keep the space suitably-sized until your growing dog needs more room!

Aside from your dog’s breed, there are a few other factors that can influence his growth rate and ultimate size. Two of the most important such factors include:

Every dog has a unique genetic code which can significantly influence the duration of his growth period, his build, and his adult size.

Some genetic traits are passed down from parent to puppy, but others are simply the result of the random variation that occurs during DNA recombination.

This means that puppies from large parents may themselves exhibit a slightly longer growth period and larger eventual size, but it is certainly not guaranteed. Large parents will occasionally produce small offspring and vice versa.

Puppies fed a poor diet may not be able to obtain all of the minerals and protein they require to grow into big, strapping canines.

Therefore, to maximize your pup’s potential (and generally keep him healthy), you’ll want to feed him a high-quality food specifically designed for puppies.

Such foods have higher protein content and are specifically formulated to provide puppies with the things their growing body’s need.

Note that if you have a large breed puppy, you’ll want to select a food designed specifically for them. Large puppies who grow too quickly can suffer from orthopedic problems later in life.

How Does Spaying or Neutering Affect Puppy Growth Rate?

There are a lot of myths and misunderstandings about the ramifications of neutering or spaying, and many owners believe that their dog will stop growing sooner or won’t grow as large if they alter their pet.

Technically, spaying and neutering are thought to trigger very subtle changes in the growth rate trajectory of puppies (pack a lunch before visiting that link) and they can influence the adult size of a dog very slightly.

However, this change in adult size occurs in the opposite direction than most owners suspect: Dogs altered before 16 weeks of age actually grow a bit bigger than those who aren’t spayed or natured at this age do.

Nevertheless, hormones aren’t the primary drivers of growth – genetics and nutrition are.

The differences brought about by neutering and spaying procedures only become apparent when you look at buckets full of data, representing thousands of individuals.

Your decision to spay or neuter your pet shouldn’t change his adult size in an appreciable way. Still, you’ll likely want to read up on the pros and cons of spaying and neutering your dog to get a better understanding of when to get your dog sterilized.

Note that many large breeds remain within the mental and emotional bounds of puppyhood for long after they’ve stopped growing.

They may have reached their full size and passed their second birthday, but they still have that lovable puppy face. Many also maintain a goofy, playful puppy-like demeanor at this time.

It isn’t entirely clear why this occurs, but it may be related to social factors.

Puppies exhibit a lot of the same facial characteristics that other young animals do, including big eyes and rounded faces, among other things. These traits are thought to help encourage tolerance and care-taking behavior in adults.

So, their puppy-like features may help prevent adult dogs from taking exception to their social faux pas.

At what age is a dog fully grown?

Can you tell how big a puppy will get?

How much will a dog grow after 6 months?

Your dog’s growth trajectory after 6 months will largely depend on their breed and expected adult size. Small breed dogs will be close to their full size at 6 months, whereas larger dogs will be 2/3 of their adult weight. Giant breeds will be at around half of their full adult size.

Have you ever had a dog that grew for an exceptionally long or short period of time? I’ve always kept big dogs, so I’m used to watching them grow for about 12 to 18 months. My Rottie reached her final height at about 16 months of age, but she continued filling out for another year or so.

Let us know about your pooch’s growth in the comments below! 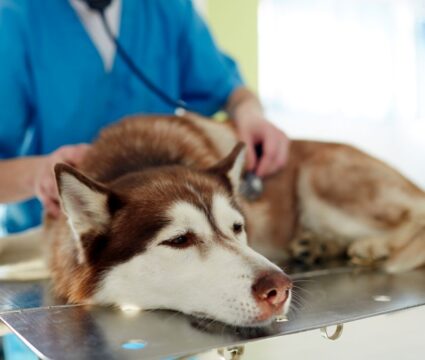 Pawp: A New Way to Consult with Vets (and Save Money Too!)

I got a puppy a month ago, she is between 2.5 months and 3 months, she already weighs 25 lbs. I did a DNA test on her, she is a mastiff/ cattle dog mix. DNA says she will weigh between 56lbs to 86lbs. I have her on Royal canin Giant puppy

That’s quite an unusual mix, Janice! Sounds like you’re going to end up with an big ‘ol super energetic pupper!

Thank you very much for this information. My daughter just got a dog from our local shelter. He is a pit bull/border collie/weimaraner mix, or so they told them at the shelter. He’s 11 months old and 43 lbs. I’m hoping that he’ll only grow a tiny bit more. Thank you again for the information.

Happy to help, Hilary!
You may want to consider getting a dog DNA test to ensure the pooch is what you think he is.
🙂

Thanks for the useful information.

Thanks for letting me join the pack

Thanks for joining, Maurice!

I adopted my Romanian Rescue when he was four and half months old and 4kg, he is detailed as a shih tzu crossbreed. His mother being shih tzu but father unknown. We were told he would be a small dog when we took him on. But his paws are really wide not long just with the fur they look so fat. Will this mean he will grow into a big dog or like our previous shih tzu just have big paws.

Hey, Maxine.
It’s tough to tell, and paw size isn’t always predictive of your dog’s eventual size. You may want to consider having a canine DNA test performed. That way, you’ll have a better idea of the breeds lurking in your pup’s gene pool.
Best of luck!

I got my first pup at 5 days old. Her mother was poisoned, leaving 9 puppies. She was bottle fed every 2 hours, and taught how to do her business. I am mom.
At 6 weeks she wighed 1.5kgs and we went sibling visiting.
Where we got her from, were two males, both weighing .94gsm, so much smaller than my pup.
I took them both home, fed them up and tried to keep them both, but the owner wanted one so I only kept one of them. He is a delight.
The brother who went home, was poisoned, and the father was poisoned about a month later.
My girl, who knows me as her mother is very big, weighing 35kgs at 9 months old.
The boy weighs about 24kgs and is much smaller, as he was not properly looked after.
He will not leave me alone, and is constantly seeking affirmation that he actually lives here and is loved. He us constantly sleeping at my feet. My girl does too, but is not so clingly.
I love them both dearly.

I can’t believe someone would poison a dog, how terrible!

OMG, where in the country are these dogs being poisoned – how AWFUL ! So sad, what a terrible thing to do to a dog , this breaks my heart 🙁