Kids both young and old tend to have a soft spot for cartoons—most of us have memories of movies and television that defined our generation.

Cartoon canines are some of the most lovable characters around—from timeless characters like Scooby-Doo and Underdog to present-day pooches like Brian Griffin, animated hounds across the ages are both beloved and unforgettable.

That means that they’re also the perfect namesake for your new pooch—from near and dear nostalgia to modern fandoms, cartoon dogs are a sweet source for naming your dog!

Did we miss any epic cartoon dog names? Share any names we missed in the comments!

Also be sure to read our posts about: 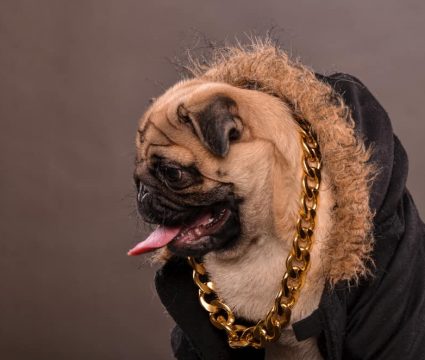 400+ Rapper Dog Names: Drop a Bone For These Name Ideas!

Nana was not a st bernard….it was a newfoundland (newfy)

I’ll be honest — your comment sent me down quite a rabbit hole.
There’s a lot of confusion and conflicting accounts regarding this issue, but — as best I can tell — Nana was a Newfy in the book; Nana was a Saint Bernard in the 1953 animated film.
🙂

I have a small rug with Disney characters..a girl and boy about same age maybe 9-12 and a smaller boy maybe 6 and dog..white with a black spot on its back is all I can see. Looks like 1930s-40s. Would very much like to know the characters if possible. Shame can’t copy paste photo here. Have other rugs like Snow White etc. which are no problem but this one even though looks a tad familiar I just can’t put names to folks on the rug.
Sure would appreciate info if you can.
Many thanks and best regards,
Dane Lussier
Hunt. Bch., CA

Hey there, Dane.
We’re not really Disney experts, so there are probably better places to find help for that particular question.
Best of luck!