My Dog Ate Cat Food — Should I Be Worried? 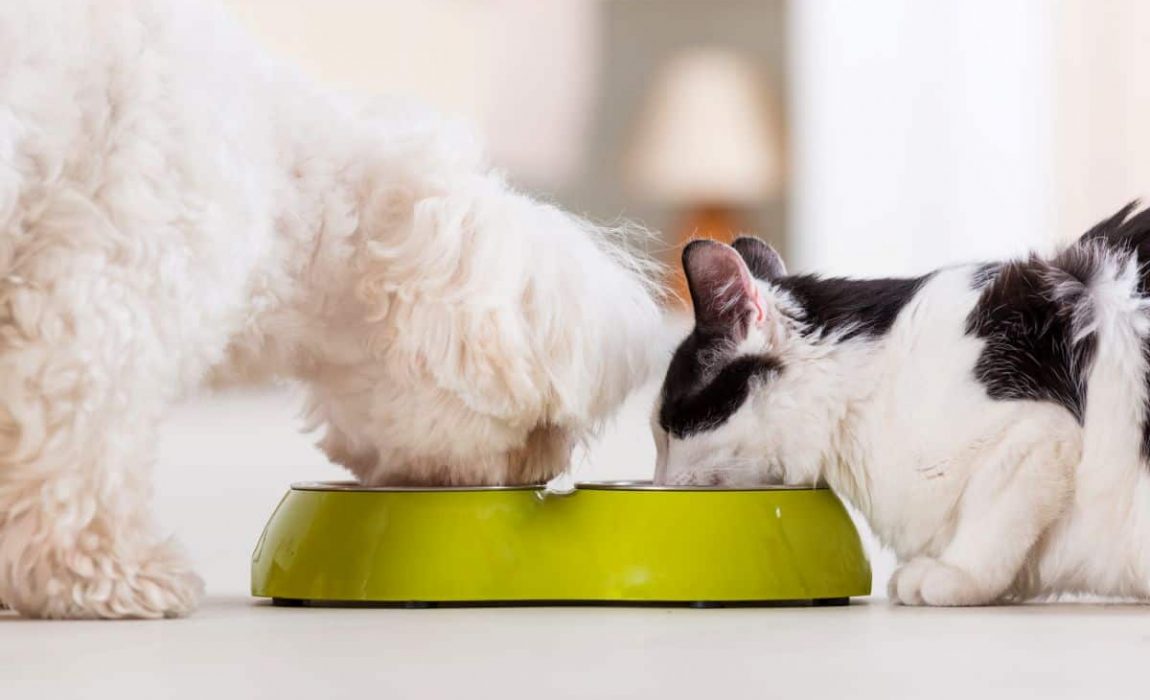 If you’ve owned your dog for longer than 15 minutes, you probably already know that your pet will eat just about anything. Dogs have been known to eat corn cobs, socks, tampons, and weed, among other things.

So, in the grand scheme of things, it isn’t very surprising that dogs often devour cat food.  And fortunately, this needn’t cause you to worry: The occasional bit of cat food isn’t going to cause your dog serious problems. It isn’t something you want to encourage — in fact, you’ll want to put an end to the habit — but it doesn’t represent an emergency.

We’ll talk about the reasons you want to prevent your dog from eating the cat’s food below and share a few helpful tips for doing so.

Your Dog Just Raided the Cat’s Food Bowl: What Should You Expect?

In the vast majority of cases, dogs won’t suffer any serious problems after eating a bowl of cat food.

Some may experience mild to moderate intestinal issues, and those with sensitive stomachs may even barf, but that’s about it.

Some dogs may suffer from some itchy skin if they’re allergic to any of the ingredients in the cat’s food. That’s not terribly likely unless your dog eats a lot of cat food, and the itching should stop quickly enough once you stop Fido from stealing his housemate’s food.

Nevertheless, all dogs are individuals who’ll react differently to different foods. Bad reactions – most notably allergic reactions — aren’t completely out of the realm of possibility.

So, if you notice your dog displaying any serious symptoms, such as breathing difficulties, intense itchiness, facial swelling, or prolonged diarrhea, contact your vet and solicit his or her advice.

What Are the Differences Between Cat Food and Dog Food?

Cats and dogs have a few important biological and anatomical differences. For example, cats are classified as obligate carnivores who require a diet primarily comprised of meat.

Dogs, on the other hand, are best characterized as opportunistic omnivores who need a lot of different types of foods, including plenty of meat.

These differences are reflected in the foods we feed each, as discussed in greater detail below.

Dog food is not that different from your food. It’s made with some of the same proteins, carbs, fruits, veggies, and supplements that comprise your daily diet. In fact, many typical homemade dog foods are quite similar to the chicken-and-rice dishes you may make for your family.

Cat foods, on the other hand, are more like Atkins-inspired recipes. They’re primarily comprised of proteins and fats, and they typically lack the assortment of fruits and vegetables that are often found in dog foods.

Nevertheless, some authorities consider these figures too low for cats and recommend protein content in the 30% to 45% range.

The AAFCO’s guidelines for fat content differ less, but they still recommend that cat foods contain 9% fat content, while dog foods only require 8.5%.

The relative lack of fruits and vegetables in cat foods, as well as the biological differences between dogs and cats, means that cat foods must be fortified with several important nutritional supplements.

For example, many dog foods contain ingredients (such as carrots) that are rich in a substance called beta-carotene. When your dog eats these ingredients, his body converts some of the beta-carotene into a chemical called retinol – better known as Vitamin A.

But cats can’t convert beta-carotene to Vitamin A, so putting carrots (or other beta-carotene-rich ingredients) in their food doesn’t help. Instead, their foods must be fortified with Vitamin A supplements.

But this is just the tip of the iceberg – cats need several other supplements in their food that dogs don’t. For example, cats must obtain taurine – an amino acid – from their diet, while dogs make taurine internally.

Similarly, dogs can also make arachidonic acid – an important fatty acid — internally, while cats must obtain it from their diet.

Is Cat Food Bad For Dogs?

None of the differences described above represent an immediate danger to cats or dogs. Neither are likely to end up in the vet’s office because they stole a bit of their counterpart’s food.

But while you needn’t worry about your dog sneaking the odd mouthful of cat food from time to time, you want to take all necessary steps to prevent the practice. Cat food may not be acutely dangerous for dogs, but it can cause problems over the long-term.

A few of the most significant and likely problems cat-food consumption may cause dogs include:

In addition to being higher in fat and protein content than many dog foods, cat foods are often higher in calories too. This can cause dogs who eat cat food regularly to gain weight.

And, while a tiny bit of weight gain isn’t likely to cause your dog serious problems, dogs who become seriously overweight or obese rarely live long, healthy lives.

Dogs may not need their food supplemented with taurine or arachidonic acid like cats, but they still require a food that is properly balanced and provides the right mix of calories, vitamins, and minerals.

Cat food isn’t designed to meet the nutritional needs of dogs, so those who consume it regularly may suffer from nutritional deficiencies.

The high fat levels in cat food can cause some dogs to develop pancreatitis (inflammation of the pancreas). This can be very dangerous for dogs, and it may even prove fatal in some cases. Note that this is a possibility for dogs who eat any high-fat foods and isn’t a problem limited to cat food.

Additionally, while it isn’t a health problem per se, pickiness may rear its ugly head if you allow your dog to eat cat food. He may start refusing his food altogether and begin demanding the same protein-and-fat-rich-goodness the cat is getting.

Keeping Your Canine Out of the Cat’s Food

If you have multiple pets, you know that it can be tricky to get them to eat their own food.

Your overweight retriever probably spends his time trying to steal your new puppy’s food while ignoring his low-calorie kibble. But the puppy doesn’t seem to mind, because he’s busy eating the cat’s food instead of his own. Meanwhile, the cat doesn’t even notice, because he just wants to eat your parakeet.

You’ll have to figure out how to keep your cat from tormenting your pet bird, but we’ll try to provide a few tips for keeping your dog from eating your cat’s food below.

Give Your Cat an Elevated Feeding Perch

One of the easiest ways to keep your dog out of your cat’s food is to simply feed your cat in an elevated location. Your cat won’t have much trouble hopping up on the kitchen counter or a climbing tower, but your dog probably won’t be able to reach these areas.

Use an Automated Feeder

Automated cat feeders can be helpful in a number of different ways. For example, if you select a programmable feeder, you can set it so that it makes the food available to your cat while you’re busy taking the dog to the park.

Alternatively, you can select an automatic feeder that only makes the food available when triggered by a special tag you can place on your cat’s collar.

Feed Your Cat in a Different Room

Another simple way to prevent your dog from eating your cat’s food is to simply feed your cat in a closed room your dog can’t enter.

You could use any room for such purposes, but bathrooms, laundry rooms, pantries, and garages are among the best. Baby gates can also be used to segment off a part of a room. Some household dog gates are designed with a small opening that allows cats to pass through while keeping canines out!

Construct a Feeding Chamber for Your Cat

If you are the DIY type, you can make your cat a secure feeding chamber that allows him to eat in peace and prevents your dog from stealing his food.

You can make such a feeding chamber in several different ways, but the simplest way is to just purchase a large plastic storage box and cut a door in the side that is big enough for your cat, yet too small for your dog. Serve up dinner inside the container and voila! Canine-free cat food consumption.

Experiment with Other Cat Food Flavors

Although it won’t work for all dogs, you may be able to dissuade your dog from eating your cat’s food by picking another recipe. For example, your dog may love your cat’s chicken-flavored food, but he may not find a salmon-based recipe so irresistible.

This is obviously a bit tricky for owners who have finicky cats, but it is worth trying. Additionally, if it works, it’ll prove to be the simplest solution of all.

And while we’re talking about dogs who like to eat cat food, it is important to note that some dogs show a predilection for eating, um, “pre-eaten” cat food that they collect from the cat’s litter box.

This is not only a revolting practice, but it can also make your dog sick, so you’ll want to put an end to it as soon as possible.

There’s really only one way we’ve found to tackle this problem: Use a dog-proof litter box. There are a number of these products on the market, and several of them are quite effective. Check out our comprehensive guide to dog-proof litter boxes if you need help dealing with this particular problem.

Cat-food theft doesn’t represent an acute danger for dogs, but it certainly can cause health problems if it is allowed to continue unchecked. Just try the strategies discussed above until you find one that works for your pet.

Have you figured out another clever strategy for keeping your dog out of the cat’s food? Tell us all about it in the comments below. Your solution may help other dog owners who are dealing with this relatively common problem. 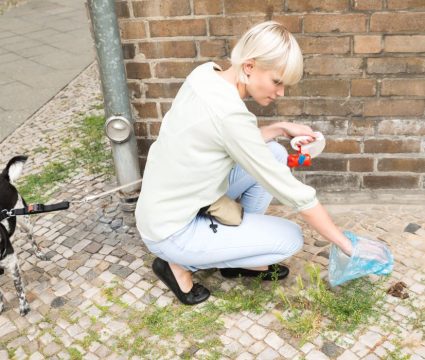 What Your Dog’s Poop Color Means