Why Do Dogs Eat Rabbit Poop? 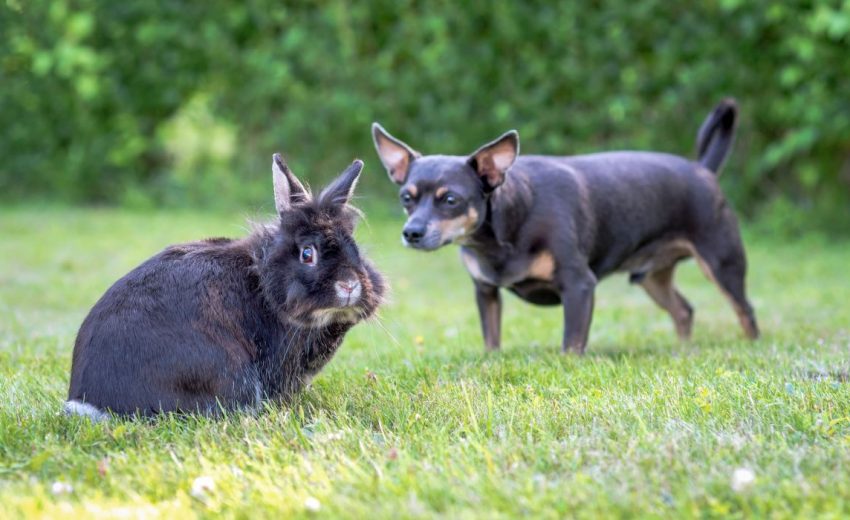 Sometimes it seems like our dogs are compelled to eat the grossest and most bizarre things they can find.

This can include just about anything, ranging from cigarette butts to diapers to ant traps. But today, we’re going to talk about a particularly odd predilection: Some dogs love to eat rabbit poop.

Dogs may eat rabbit poop for a few different reasons, which we’ll discuss below. Don’t freak out though — this behavior is pretty common, and it rarely leads to serious illness.

However, it can make your dog feel rotten in some cases, and you’ll want to do whatever you can to stop it, because, well, gross.

Read on to learn more about this strange issue and what you can do about it.

Why Do Dogs Eat Rabbit Poop?

As with any question regarding the motivations of dogs, we can’t ever know for sure why they do the things they do. But we can be reasonably sure that rabbit-poop-eating behavior often occurs because of one of the following reasons:

Of course, while it isn’t a very satisfying answer, it is always important to remember that dogs do weird things – just like their owners (although, hopefully, your weird behaviors don’t include scavenging rabbit poop from the yard).

Rabbit feces is generally not dangerous for dogs. However, we should do what we can to prevent them from eating it.

If nothing else, feces can conceivably serve as a food source for bacteria and other microscopic pathogens, which may make your dog sick.

For that matter, your dog’s slobber ends up all over you and everything you own during the course of daily life, so it just seems prudent to keep poop out of his mouth.

But with all that said, rabbit poop isn’t terribly likely to make your dog sick. Most parasites and pathogens found in rabbit poop are relatively species-specific and not capable of infecting dogs.

For example, dogs who eat rabbit poop are often found to excrete coccidia (a type of single-celled parasite) in their feces. However, these coccidia organisms are harmless to your dog, and they’ll just pass right on through his system.

Despite the fact that rabbit poop is typically harmless to dogs, you should always contact your vet if:

Rabbits May Still Present Dangers to Your Doggo

While rabbit poop itself doesn’t represent much of a serious risk to your dog, the actual rabbit may be dangerous.

Kidding aside, rabbits aren’t going to try to fight your dog, but, if your dog actually catches and consumes a rabbit, he may become infected with tapeworms.

Additionally, rabbits often harbor fleas and ticks, including some that may spread tularemia or – even worse – bubonic plague (yup, that plague).

So, if your dog seems to have a tendency to eat rabbit poop, or you simply have a lot of rabbits on your property, you want to do what you can to protect your pooch. This means using a good preventative flea medication (preferably, one that also works on ticks), and supervising your dog closely while he’s rompin’ around in the back yard.

Wait, Back Up: How Do I Distinguish Rabbit Poop from Other Types of Droppings?

Unless you’re a seasoned wildlife tracker or you’ve kept bunnies as pets, you may not even know how to identify rabbit poop or distinguish it from the droppings of other animals. But don’t worry – it’s not hard to learn.

First, it is important to note that rabbits actually produce two different types of “number twos.”

One type is actual feces – proper poop, you may say.

These droppings are more-or-less round in shape, and each is about the size of a pea. They are basically brownish in color, but you may also see grass, hay, or other plant material mixed in. These poops are generally deposited in small piles throughout the rabbit’s turf.

The other type of droppings that rabbits produce are called cecotropes.

Simply put, cecotropes are pellets produced by the cecum (part of the large intestine), and they are comprised of partially digested food. They’re produced several hours after the rabbit eats, usually at night.

Cecotropes are often a bit smaller than normal feces (technically, they aren’t feces at all), and they’re often smooshed together into a single mass. They also tend to have a characteristic and strong odor, while typical rabbit feces only produces a very slight odor.

This begs an obvious question: Why do bunnies produce two different kinds of poop?

Well (and I really hope you aren’t eating while reading this), that’s because rabbits will consume cecotropes to benefit from the undigested food contained within them.

However, this also means that you’re not as likely to find cecotropes as you are typical rabbit poop – unless the bunny who made them was startled or something, it would likely eat them before your dog has the chance to do so.

From a canine health standpoint, it doesn’t really matter whether your dog eats rabbit feces or cecotropes.

How to Stop a Dog from Eating Rabbit Poop?

Unfortunately, there aren’t many easy and effective ways to curtail your canine’s poop-eating behavior. But the following strategies may prove helpful:

Ultimately, your dog’s rabbit-poop problem probably won’t lead to serious health issues, but it still makes sense to discourage your doggo from munching on these kinds of “yard treats.” It is, however, important that you prevent your dog from eating actual rabbits he may find in your yard, as this may cause him to become sick.

Does your dog make a habit of eating rabbit poop? Have you figured out a good way to stop it? Share your thoughts and experiences in the comments below! 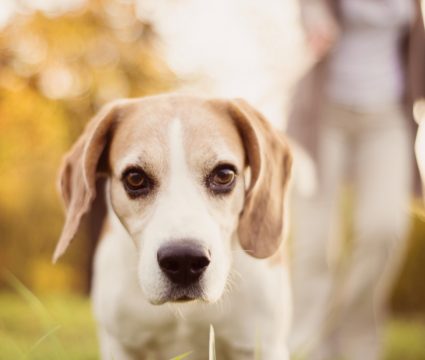 Why Do Dogs Kick After They Poop?

Thanks for this. We had dachshunds in the past and never noticed this behavior, but recently acquired a five year old golden retriever and she started doing this a few weeks after she arrived. First, we didn’t realize we had so many rabbits in the yard, because we never see them. Second, she didn’t do this when she first arrived. She’s on the same food at the recommended amount that she was eating with her former family, so I am stymied at this behavior.

Raised rabbits for years never had a dog get sick from domestic rabbit feces. I always have concern about wild rabbit meat though. Because of disease