Help – There Are Worms in My Dog’s Poop! What Do I Do? 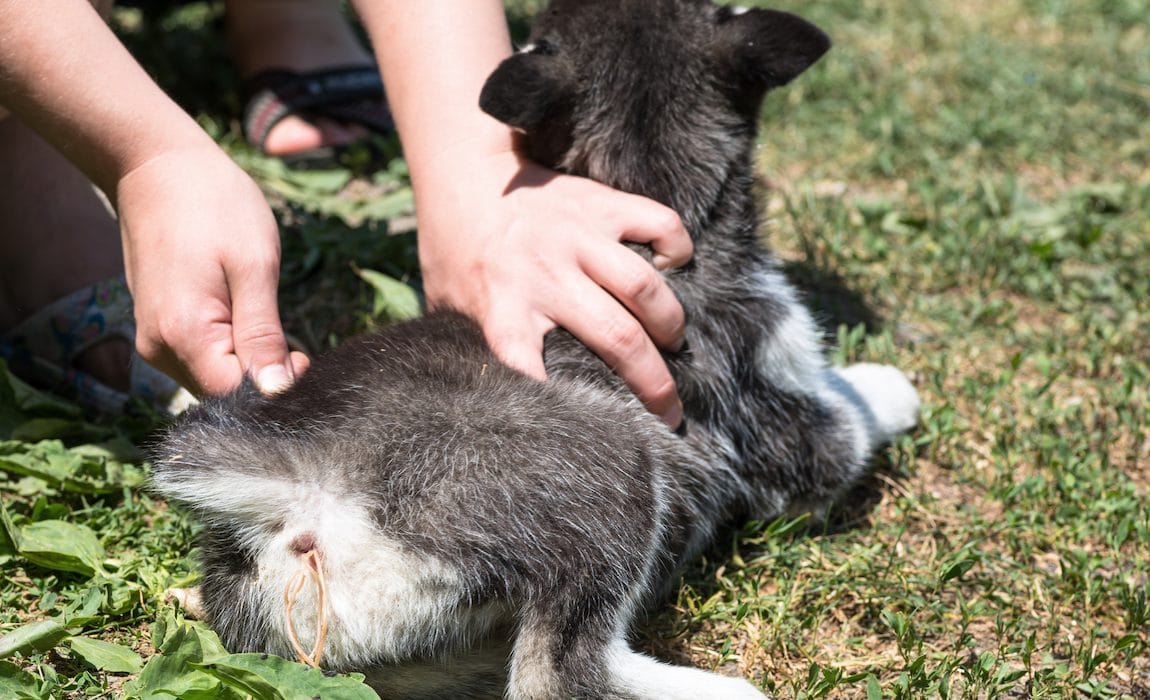 Discovering a pile of wriggling worms crawling around in your dog’s poop is a rite of passage for most dog owners.

It is a shocking, disturbing, and thoroughly disgusting event, but you needn’t freak out. All dogs get worms at some point in their life, and there are a variety of dog worm treatments available.

But the first thing you need to do (aside from using a flamethrower to kill any worms in front of you) is to identify which wigglers are infesting your pet. This is the only way you can figure out what you’ll need to do to fix the problem.

What Kind of Worms Are in My Dog’s Poop?

There are a bunch of different parasites that can live inside your pupper’s body. This not only includes worms but a few other types of organisms, such as protozoans.

However, many of these parasites are invisible to the naked eye. So, you won’t see them crawling out of your dog’s poop. But, if you do see worms, you can simply consult the info below to see what they are.

Whipworms are tiny little buggers, who look kind of like a piece of thread. They’re usually pretty fat at one end, and they measure about ¼-inch long.

However, while whipworms are technically visible, owners often fail to notice them. Whipworms are even tricky to identify microscopically thanks to their small size and tendency to produce relatively few eggs.

Tapeworms are infamous for their ability to reach large sizes. I’m not going to gross you out with photos of gigantic worms, but just understand that they can reach several feet in length (although most remain much smaller).

Tapeworms are pretty easy to recognize. They are one of the few parasitic dog worms that have a segmented appearance. Typically, they’re discovered when owners see flat, white worms in their dog’s poop. However, they can actually be any color between brown and white.

It is more common to see tapeworm segments (called proglottids) than entire worms. These dog “worms” usually look like rice.

Tapeworms shed these segments regularly as part of the reproductive process. They actually contain eggs which will hatch after being eaten by some other animal.

Fortunately, tapeworms generally have an indirect lifecycle, which means they must pass through an entirely different species before infecting your dog. This means that your dog probably won’t be able to re-infect himself if he inadvertently ingests some of the eggs.

Tapeworms can cause health problems, but in the grand scheme of things, they aren’t particularly harmful to otherwise healthy dogs. They’re also easy to treat with medications.

Hookworms are one of the most serious parasites that affect dogs. They can cause anemia, diarrhea, and – if the worms make their way into your dog’s lungs – they can cause coughing too. They’re common in the environment, they can build up in large numbers without treatment, and they are even contagious to humans.

There are a few different species of hookworm that may infect your dog. Most are light-colored and measure about ¼ to ½ inch in length, making them very difficult to spot.

In practice, it is very rare for owners to observe hookworms in their pet’s stool. Instead, they’re typically discovered when a vet or lab examines stool samples microscopically.

Because infestations can be deadly and these parasites can also infect humans, you must take immediate action anytime you find (or suspect) hookworms in your dog’s poop.

Roundworms are probably the most commonly seen worms in dog poop. This is partly because they’re pretty common, but – more importantly – they’re big enough to be easy to see. They also have a tendency to wiggle around a bit once expelled, which makes for a macabre sight that pet owners rarely forget.

There are a few different roundworm species, but most generally resemble – and I apologize for giving you this mental image – spaghetti noodles. They are white to yellow in color, and they often measure 5 or 6 inches in length.

Roundworms can actually fill your dog’s digestive tract, which can give your pup a pot-bellied appearance. They’re very contagious, and they’ll usually be present in the gut of all the dogs in your home.

More troublingly, roundworms occasionally migrate into the other tissues of your dog’s body. This can cause very serious health problems, and such worms may require surgical removal. However, roundworms are usually relatively easy to treat with medications.

The best way to treat worm infestations is by heading to your vet. Your vet will not only be able to identify all of the parasites your pet is harboring (including those you can’t see), he or she will also be able to ensure that your dog isn’t suffering from any health problems the parasites have caused.

However, there are a few things you can do on your own to treat your dog’s worm problem.

Start by picking up a diagnostic test kit. This particular kit is pretty easy to use.

Simply collect a bit of poop, package it up, and send it off to the lab (and for goodness’ sake, wash your hands afterward). Within 24 hours, the lab will get back to you with the results. Also, be sure to look closely at any of the worms you can see and identify them based on the images shown above.

Then, you’ll need to obtain a medication that will eliminate any of the parasites present. Different drugs work on different species, which illustrates the importance of obtaining a positive identification.

We’ve written about the best (over-the-counter) wormers for dogs at length, but we’ll cover the basics below:

Safeguard 4 Canine Dewormer is the one we recommend for eliminating hookworms, whipworms, and roundworms, while Durvet Triple Dog Wormer is a better choice for dogs suffering from tapeworms (it’ll also help eliminate roundworms and hookworms too).

What Are the Symptoms of Worms in Dogs?

As mentioned earlier, different kinds of worms often cause different symptoms – seeing white or brown worms in your dog’s poop isn’t the only sign of an infestation. In fact, there are several other signs you may notice, which may indicate the presence of intestinal worms or other parasites.

Some of the most notable signs that your dog may have worms include:

Additionally, dogs – and especially puppies – often exhibit a generalized failure to thrive when they’re harboring a belly full of worms.

The takeaway is, make sure to investigate the possibility of your dog having worms if you notice any of the symptoms above, or your puppy-parent sense just tells you something is wrong.

Seeing worms in your dog’s poop is a pretty unsettling experience, but it is a normal, common thing, which most dog owners will experience at some point in time.

It’s also worth noting that there aren’t that many types of worms you’ll need to worry about. The world is full of parasitic species, but only a relatively handful affect dogs. You won’t have to worry about finding pinworms in your dog’s poop, for example, as they stick to humans.

Just be sure to identify the worms present and choose a worming medication that’ll eliminate them. Also, it is always a good idea to work closely with your vet to ensure that you aren’t missing any worms or parasites that are too small to see with the naked eye.

Do you have any gross or entertaining worm-in-your-dog’s-poop stories to share? Share them with us in the comments below! 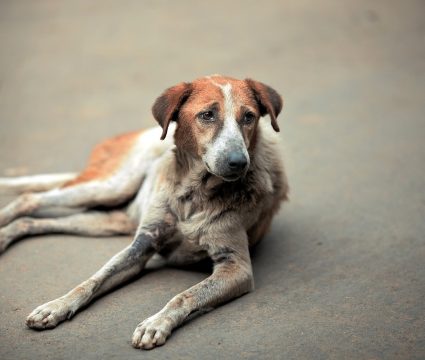 I breed my chihuahua about once a year maybe once every two years and I’m open to any information you can give me thank you for your subscription have a great day.

Hey there, Lynn. Not quite sure what kind of information you’re looking for, but we discuss a variety of different dog-breeding issues in our article about dog litter size.
Best of luck!

Hey, Ashley.
Safeguard 4 Canine Dewormer is designed to eliminate roundworms (among others), while Durvet Triple Dog Wormer is used to treat tapeworms.
Just be sure to check with your vet before using them.
Best of luck!

We rescued our sweet baby at the end of November. Thank goodness, because the temperature really dropped after then. She is now warm and hookworm free! She weighed maybe 30 lbs when we got her. She is supposedly a full blooded boxer that is 1 and a half years old. She now weighs at least 45 lbs. When she had hookworms, she couldn’t control her urine at all. Since her hookworms have been treated she’s had no accidents in the house! I’m thinking some worms can cause urinary issues and it’s not the animals fault they can’t hold it

I recently found a lot of roundworms in my puppies stools (which terrified me, I’d never seen anything like it) I bought a wormer as a quick solution til he goes for his second vaccination. Now his tummy is making really loud gurgling and squeal noises. Should I be concerned?

Hey, Kerry.
It’s probably worth a phone call to the vet, just to be safe.
“Squeal” noises don’t strike us as normal.
Best of luck!

Euwwwwwwwwwwwwww! I’ve never seen worms in poop before until I found a bunch of wiggling tapeworm segments in my new puppy’s poop last night 15 minutes before the NYE countdown! I was so grossed out and felt like I suddenly had creepy crawlies all over me and the apartment, and immediately worried about our older dog and if we possibly got infected from kissing and cuddling with the puppy. Called the SPCA and they said it’s not an emergency, he’s going to be checked out in a couple days by the vet and they’ll let us know next steps about our older dog… in the meantime I found this article to help educate me. Thanks for writing!

My husband and I laughed that 2020 had a real “sh*tty end”. Happy for 2021 and (fingers crossed) no more wormies in our sweet little puppy! He was rescued off the street with a litter of 7, with a distended belly and fleas. I’m assuming the fleas are how he contracted it. Poor little guy. Definitely still *shuddering* from this gross rite of puppy passage. 🙂

Hey, Lisa. Tapeworm segments are certainly pretty gross, but they’re not — as the SPCA explained to you — a medical emergency.
For that matter, they’re pretty common and easy to treat.

And we’re definitely happy to put 2020 behind us! Happy New Year to everyone!

I can relate! I found my puppies roundworms on Christmas Eve and dealt with it through holidays and my birthday! It’s definitely not a fun rite of passage and today I saw he has tapeworms… geesh!

Does this mean that since it hard to reinfect themselves that my other dogs wouldn’t get tapeworm from contact with a proglottid?

Hey, Jes. Yes — most tapeworms have indirect life cycles, so an intermediate host is usually necessary.

Great post! I enjoyed reading your article. This could help me determine what kind of worms my dogs has and what treatment I need to give them. This too is an interesting article your readers may love https://ultimatepetnutrition.com/worms-dog-poop/ I will be coming back for more, for sure.

Glad you found it helpful, Aron!