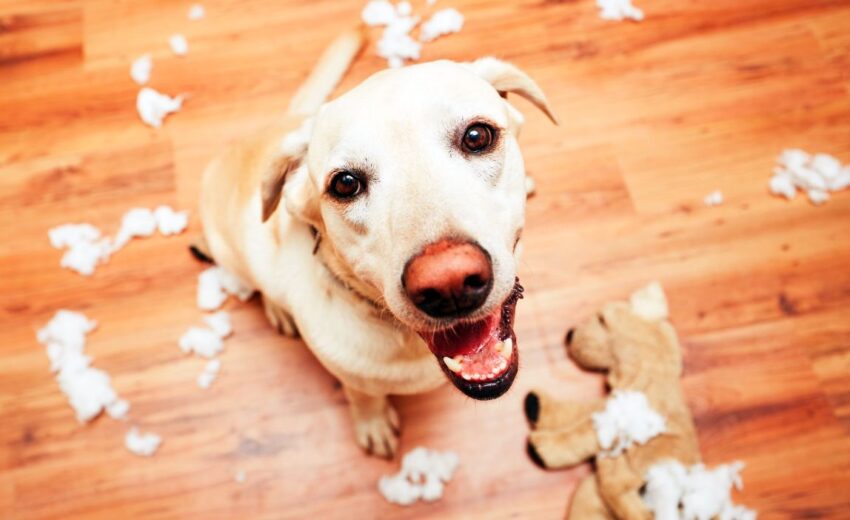 We’ve all been there. You give your pup a brand new toy, expecting it to become his best friend for years to come… but then he loves the toy a little too much.

While the “crime scene” may look hilarious, the possible consequences are anything but that. If consumed, stuffing can be incredibly harmful for dogs and even put their lives at risk.

Below, we’ll explain the dangers animal toy stuffing presents, highlight some of the reasons why dogs do this, and detail what you should do if you catch your dog nomming on stuffing.

We’ll also point out a few ways you can prevent your pup from doing so again in the future.

Dogs should never be allowed to eat animal toy stuffing — or any other form of stuffing for that matter — and you should do everything possible to prevent it from happening.

Stuffing is typically made from materials that can’t be digested properly (or safely), which can lead to blockages and other health issues.

What Will Happen if a Dog Eats Animal Toy Stuffing?

It’s not necessarily a cause for panic if your dog eats animal toy stuffing; some four-footers manage to pass small amounts of stuffing without issue, typically within 10 to 24 hours.

However, for other pups it can lead to complications like an upset stomach, choking, abdominal pain, or even life-threatening bowel obstructions.

The risk can vary depending on your dog’s size and the amount of stuffing ingested.

For example, if a small Chihuahua eats a whole load of stuffing, he’s much more likely to experience problems than a Great Dane who consumes the same amount.

Some animal toy stuffings are also treated with toxic chemicals during production, which can cause additional complications. This is especially the case in cheap imported toys (many companies based overseas fail to follow strict manufacturing and safety policies).

What Should You Do if Your Dog Eats Animal Toy Stuffing?

Before anything else, you need to stop your dog from eating more stuffing.

There’s a few ways you can achieve this, though the best method will ultimately depend on what your dog responds to and tolerates:

When your dog drops the stuffing — or unfortunately swallows it — quickly collect any other stuffing and toy remnants laying around.

But don’t throw away any of the remnants you pick up; they’ll help you assess the exact amount of stuffing your dog has ingested.

It’ll also help you determine whether he may have eaten any other parts, like the animal eyes or zippers.

Once you’re certain your dog isn’t able to consume more stuffing, immediately contact your vet and explain the situation.

Make sure to mention the size of your dog, and how much stuffing (or toy parts) you believe he has consumed.

Follow the advice provided — the vet may encourage you to visit the office immediately, or to monitor your dog carefully over the next two to three days.

No matter what your vet advises, you should keep a close watch on your dog and immediately contact your vet again if he exhibits any of these troubling signs:

If your dog is choking (signs like retching and hacking) and you’re unable to remove the stuffing from his mouth, perform a heimlich maneuver and get a family member to contact a vet immediately.

Do your best to remain calm.

While it can be tempting, never try to induce vomiting at home without first consulting a veterinarian. Certain parts of toys, like zippers and sharp cords, can potentially cause internal injuries when vomited.

Unless otherwise directed by your vet, you should also avoid giving your dog any food until he passes the stuffing.

To them, stuffing isn’t something dangerous, but rather a “fun” texture they can nom on to relieve their chewing urges. Animal toys in particular also trigger their prey drive.

In the past, dogs had to hunt for their food, often including small animals. While they no longer need to hunt, they still have that instinctual desire to.

Aside from chasing after squirrels, ripping apart and “killing” animal plush toys (which resemble prey) is the next best thing to satisfy that desire.

Unfortunately, this in turn causes them to pull out (and nom) on a toy’s stuffing!

Other reasons why your canine might eat animal toy stuffing include:

Are Stuffed Toys Safe for Dogs?

Some dogs can safely enjoy stuffed toys under supervision, but others cannot.

It ultimately depends on how your pooch interacts with stuffed toys.

They’re generally safe for light chewers who don’t have a history of shredding things to pieces, and also for dogs who respond well to the “drop it” and “leave it” commands.

On the other hand, you don’t want to give an aggressive chewer a stuffed toy, as he’ll likely tear it apart (and devour the stuffing) within minutes.

Another consideration is your dog’s size.

Small dogs are more likely to choke on stuffing and experience intestinal blockages than large dogs. So, stuffed toys are better suited to big breeds, like golden retrievers, Labradors, and poodles.

Of course, if you have a small dog that chews lightly, a stuffed toy can still be perfectly safe as long as you keep our safety tips in mind (see below).

If you want to avoid the risks associated with stuffing, there are plenty of dog toy alternatives you can try. You’re sure to find an option that suits your pup’s chewing habits, needs, and playstyle.

Just note that a lot of the toys featured above aren’t suitable for aggressive chewers.

But don’t worry, if your doggo is a fluffy shredder, you won’t have to (and shouldn’t) cut toys out of his life. We’ve tried to help you by compiling a list of toys designed to withstand tough chewing and heavy thrashing.

Be aware that while every toy comes with its own advantages, toys also come with their own risks. Make sure to familiarize yourself with the possible dangers — and decide if the toy is going to be safe for your dog — before committing.

While it’s not always possible to prevent your dog from nomming on stuffing, there are some steps you can take to minimize the chances of it happening:

Stuffed animal toys can be a great source of entertainment and help your dog relieve his chewing urges. However, they also come with potential risks, especially if your pup is an aggressive chewer.

Below, we’ve answered some common questions owners have about animal toy stuffing. We’ll also unpack some of the safety concerns of these types of toys.

Is the stuffing from stuffed animals safe for dogs?

Stuffing can’t be digested and isn’t safe. If your dog happens to consume it, he may experience stomach issues, abdominal pain, and even a bowel obstruction (blockage). Stuffing can also pose a choking hazard if it gets stuck in your dog’s throat.

With that said, the stuffing will only be accessible to your dog if he manages to chew through the toy. Always supervise your pup during his play sessions.

What toy stuffing is safe for dogs?

Stuffing in its usual form isn’t safe for dogs. You can find plenty of “stuffing” alternatives on the market though. A popular option is to buy a hollowed-out toy, and stuff it with treats, kibble, or dog-friendly food pastes.

Is toy stuffing toxic or poisonous to dogs?

What should you do if your dog eats toy stuffing?

If your dog eats toy stuffing, you should immediately tell him to “drop it”, pick up any other toy remnants, and contact your local veterinarian. If safe to do so, you should also remove stuffing stuck at the front of your dog’s mouth.

Animal toy stuffing can be dangerous if ingested, but taking necessary safety precautions, and teaching your dog critical commands like “leave it” and “drop it,” can help minimize the risks.

Has your dog ever had a bad experience with toy stuffing? How did you prevent it from happening again in the future? Let us (and fellow pup parents) know in the comments down below! We’d love to hear about it.

24 Organizations That Help Pay Vet Bills: Finding Help When You Need It Most! 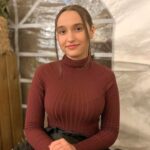 April is a freelance content writer who specializes in animal care. She has owned several pets over the years, and before she began sharing care guides, training tips, and pet product reviews with the online realm, she was a marketing assistant for Portobello Pup — dog care apparel company. Her role involved interacting with a range of lovable breeds, including puli dogs and chow chows. She has also helped run a stall at the international dog show Crufts. In her spare time, you’ll either find her playing tug of war with her pooch, binge-watching animal-themed movies, or birdwatching in the Brecon Beacons.