The Hawaiian Islands are the definition of paradise—from the scenery to the culture, it’s the perfect place to take in the beauty of the tropics!

The unique Hawaiian language provides a plethora of beautiful and interesting words to dub your dog. Many Hawaiians are named after words in the language that serve as symbolic representation for objects or adjectives — this is also an excellent way to represent your pooch’s personality in his moniker!

Hawaii boasts a rich heritage, including a fascinating religion and culture, deeply rooted in tradition. From the interesting language to the beautiful landscape, people, animals, and culture, Hawaii is a rich land full of inspiring places — the perfect place to draw inspiration for naming your furry friend!

Today we’re detailing some of the latest and greatest Hawaiian dog names. Let’s dig in!

These Hawaiian boy dog names are excellent picks for your canine companion.

Check out these Hawaiian girl dog names for your sweetheart!

Do you have a canine cutie? These adorable names for dogs might be perfect for your furry friend.

Why not name your four-footer after one of the islands that make up Hawaii? Here are the main Hawaiian islands that can also make excellent Hawaiian names.

Hawaiian Dog Names Based On Cities and Sites in Hawaii

Consider naming your pooch after one of these Hawaiian cities or landmark sites.

Hawaiian Foods That Could Be Great Hawaiian Dog Names

These Hawaiian food-inspired dog names are perfect for pups that can’t stop thinking about treats!

Looking for a more spiritual name for your canine? Try one of these names of Hawaiian gods and goddesses.

Hawaii is home to incredible flora and fauna, so you may want to consider some of these nature-inspired dog names for your pupper!

History and culture can also serve as great dog-name inspiration! Check out some of these Hawaiian culture and history references and see if any would be a good fit for your four-footer!

Are you still having trouble finding the perfect Hawaiian dog name for your hound? Here are some commonly asked questions and answers to help!

What is a good Hawaiian dog name?

There are plenty of great Hawaiian dog names! You could choose something neutral like Olina meaning joyous, or opt for something more specific like Waikiki, named after the beautiful neighborhood in Honolulu.

What is a good Hawaiian name for a male dog?

What does Loke mean in Hawaiian?

“Loke” refers to some sort of flower, like Lokelani refers to a small red rose.

What’s the Hawaiian word for dog?

The Hawaiian word for dog is ʻīlio.

Are there any other Hawaiian dog names or Hawaiian phrases you think would make great dog names? Share your own ideas in the comments!

Looking for more dog name ideas? Check out our articles on: 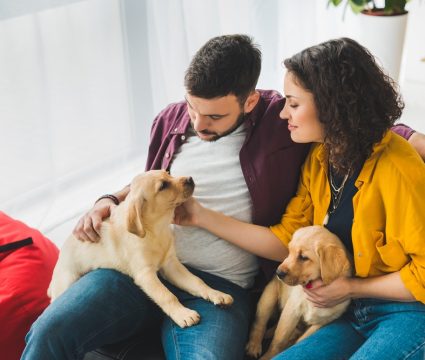 Please learn to spell Hawaiian names before writing a blog.
A lot of these names are spelled wrong.

Pretty sure we used the most common spellings, Malia. But we’re happy to make corrections if need be.
Give us a specific example or two and we’ll check ’em out!