Rottweiler Breed Profile: The Good, the Bad, and the Slobbery! 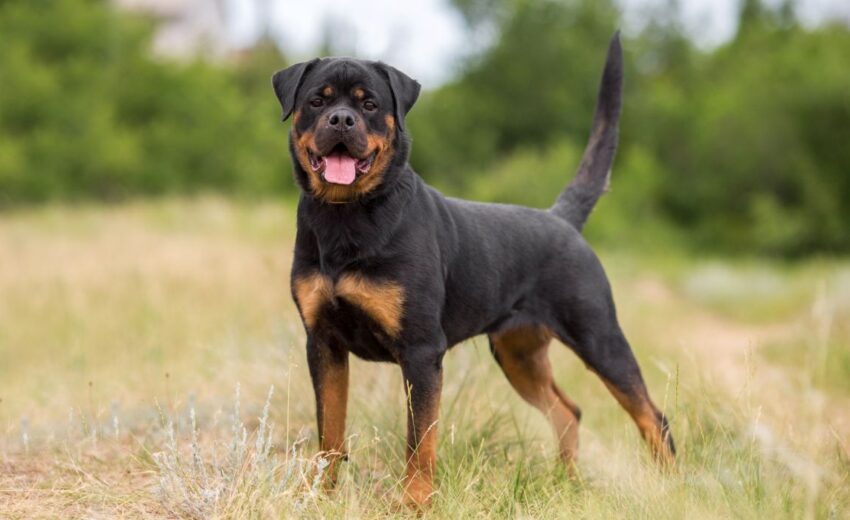 Thinking about adding a Rottweiler to your pack?

Rotties are certainly awesome dogs — you don’t have to tell me, I own one!

But it is always important to learn as much as you can about any breed you’re thinking about buying or adopting. And this is especially true when you’re considering a breed as big, strong, and protective as the Rottweiler is.

We’ll try to help by explaining everything you need to know about these black-and-tan four-footers below. Just be sure to consider all of this info carefully before making your final decision.

Let’s start by just running down some of the basic facts about Rottweilers — we’ll get into deeper detail a bit later.

Rottweilers are generally recognized as one of the oldest dog breeds, and their history is a bit better known than some others. That said, the breed is so old that there are still a few gaps in our knowledge.

What we do know is that Rottweilers originally descended from a now-extinct Roman dog breed known as the Molossus.

These dogs were tasked with driving cattle, and Romans traveled alongside them as they marched on Germany, around 2,000 years ago.

Eventually, some of these dogs ended up in the city of Rottweil, where they interbred with the native dogs of the region.

Over time, their owners began using them for a variety of purposes, including protection. Butchers would reportedly have Rotties accompany them while working (hence the “butcher’s dog” moniker).

Some even claim that the butchers would hang their coin purses around the necks of their formidable dogs for safekeeping.

The dogs’ popularity declined as cattle driving stopped being a thing, and the breed nearly disappeared by the late 19th century. However, during the lead-up to World War I, police forces needed canines to work alongside their officers. Rottweilers were a natural fit, so their population began to recover.

A few Rottweiler clubs formed around the same time, including the Allgemeiner Deutscher Rottweiler Klub (likely the most important of the early clubs) in 1921. A few years later, the first Rottweiler was registered with the AKC. From here, their numbers only continued to grow, eventually peaking in the 1990s.

Getting Real about Rottweilers: The Good and the Bad

All of these facts, figures, and tidbits are great, but let’s talk about what it means to really share your life with a Rottweiler.

Let’s start by examining some of the benefits and challenges these puppers present for those who may be considering adding a little butcher’s dog to the fam.

See? There are tons of things to love about these little floofs. But like I said, they are clearly not right for all owners or situations, and they present some very serious challenges.

A few of the most notable include:

Unfortunately, there’s one other heart-breaking downside to Rotties (and it’s difficult for me to even type this): They don’t live very long.

Their typical lifespan is between 8 and 10 years, and perhaps a little longer in exceptional cases. This, I’ve concluded, is nothing more than a cruel trick the universe has decided to play on Rotties and their people, but it’s one that you must know when diving into the black-and-tan waters.

Common Traits Aside, All Rotties Are Individuals

The traits discussed above are all pretty consistent, and they accurately characterize most Rottweilers. But it’s important to understand that all Rotties (indeed, all members of all breeds) are individuals, who exhibit various quirks and idiosyncrasies.

For example, most Rottweilers are sensitive (as are guarding breeds in general – it’s part of what made them so well suited to the roles they played early in their development).

But my pooch is exceptionally sensitive.

In many ways, this is a good thing. If I’m feeling a bit bummed out, she already knows and is likely already licking me and looking up at me with those oxytocin-inducing eyes. When I’m happy to see her (which is always), she gets even happier than I am. And when I’m excited about something and ready to celebrate, she’s always down to party with me.

But it can also be difficult.

Let’s say I’m frustrated about something. She will pick up on this, and it will take a toll on her – no matter how much I try to reassure her.

And despite being a gigantic beast of a dog, she’s easily spooked by loud noises in the kitchen.

This dog will immediately put herself between me and what she perceives as a threat without a second thought, but if I accidentally bang a pan or make too much noise when changing the garbage bag? Forget about it – she’ll be hiding somewhere safe.

The point of all this is that while we can talk about breed tendencies, at the end of the day, all dogs are unique individuals. And you won’t know what your pup’s quirks are until you’ve already brought her home.

Bottom Line: Is a Rottweiler the Right Dog for Your Family?

Before you go out and buy or adopt a cute little black-and-tan puppy, just make sure that the following sounds like a fair characterization of your family:

We hope this profile has helped you understand Rottweilers better and determine whether one would be a good fit for your family. I’m obviously a big fan of these doggos, but they certainly aren’t a good fit for all people and situations.

As one last bit of parting advice, I’d encourage prospective Rottie parents to meet several examples of the breed to see what they’re really like in person.

Do you have a Rottweiler of your own? Let’s hear about her! Tell us what I forgot to mention, as well as anything else you think people considering the breed should know. 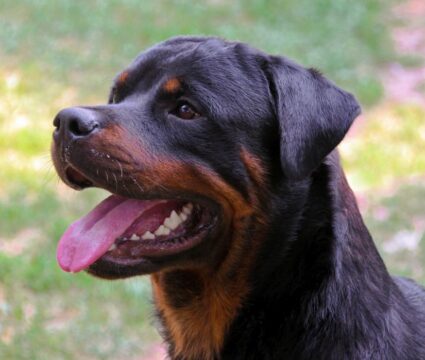 6 Reasons You Should NEVER Own a Rottweiler!

Really nice article! It was helpful. Thank you!