Why Do Dogs Curl Up When They Sleep? 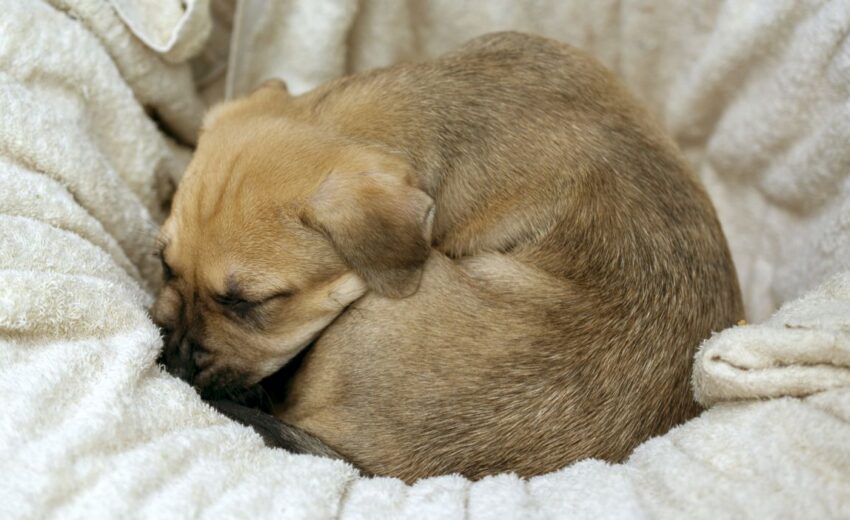 Because it’s cute. OK, that’s not the reason they curl up to sleep, but it doesn’t mean it isn’t true.

There isn’t a completely clear-cut answer to this question, and no matter how many times you ask your dog, she’ll never tell you (she’s so secretive). But the biology and evolutionary history of dogs provide a number of helpful clues, which help to explain why most dogs like to curl up when they sleep.

Dogs Curling To Sleep: Your Comfort May Vary

Before going further, it’s worth noting that curling up to sleep is not a universal behavior among dogs – it’s not like tail-wagging or panting. Many dogs sleep on their sides, and some even sleep on their backs.

My Rottie is a back-sleeper; she’ll lay on her side or curl up every once in a while, but she usually sleeps with her belly pointing to the sky.

So, don’t worry if your dog doesn’t sleep in a little coil. Sleeping postures vary among individuals and, likely, breeds too. For example, whippets probably struggle to balance on their backs, but wide-hipped breeds are more stable in this configuration.

Nevertheless, most dogs will probably curl up in one set of circumstances, and that does tell us something.

The Harsh Life of Wild Canines

While our dogs are fully domesticated, they are still the relatively recent descendants of wolf-like canines. As such, dogs retain a lot of the behaviors and biology exhibited by their wild-living predecessors.

For example, the peeing/marking/sniffing behaviors of dogs likely trace their origins back to the time in which their ancestors had to mark and defend their territory from other canines.

It’s why dogs kick up the grass after they poop, or why they might stare you down while making a movement.

Similarly, many of the ways in which dogs communicate probably originated with their wolf-like ancestors.

Curling up to sleep is another example of a historic hanger-on. It probably arose in response to a few different challenges wild canines faced. Three of the most important challenges include:

The Night Is Dark and Full of Terrors

Unlike your pampered pooch who sleeps indoors, wild canines had to worry about predators when they went to sleep. To that end, it made sense to conceal their relatively vulnerable underbellies. At least this way, if a predator pounced in the middle of the night, they were slightly better protected than they would be otherwise.

Curling up also makes sense if you sleep in a tiny little den. It isn’t entirely clear whether proto-dogs slept in dens all year long, or if they only did so for brief periods. This is because many modern canines, such as wolves, only den when they are whelping puppies; while other wild canines spend most nights in elaborate burrows.

But, whether they did so regularly or not, they probably slept in dens for short periods of time. And if you are going to dig out a den, it makes sense to dig the smallest den necessary. So, by sleeping in a coil, proto-dogs could take up less space.

They Make Their Own Blanket

There is one more reason dogs curl up when they sleep: It helps them stay warm. And this is why the behavior is at least occasionally employed by almost all dogs. Even though they are covered in a thick layer of fur, dogs can catch a chill if the temperature falls during the night.

Curling up enables dogs to conserve as much of their body heat as possible; when they curl up, they expose less of their body surface to the cool night air. Remember that dogs (like humans) are heated from the inside, so the more of their surface that is exposed to the cold, the cooler they get.

Interestingly, this warmth issue is a bigger problem for small dogs. This is because small dogs have a larger amount of surface area relative to their mass than larger dogs do. Since they’ve got a lot of surface and relatively little bulk, small dogs cool off more quickly than their bigger cousins do.

This means that pint-sized pooches are probably more likely to sleep in a curled position. But even the biggest and most densely furred dogs will likely curl up to sleep if they get cold enough. Luckily we humans have invented heated dog beds to help our four-legged pals stay warm, but a little DIY cuddling never hurts either.

What About the Spinning?

This curled sleeping behavior may be linked with the tendency of some dogs to spin around before laying down. And this spinning behavior is also a remnant of your dog’s ancestors.

As with the coiled sleeping posture, scientists do not have any definitive answers for why some dogs turn around in several circles before dropping into a crouch and laying. However, it is easy to envision how this behavior helped dogs prepare their sleeping space.

For example, by turning around in a few tight circles, dogs can squish down the grass or leaf litter to make a more comfortable laying space. It also gives them a chance to note and remove anything objectionable, such as a stick or rock. It may even have a social function, as it gives the circling pooch a chance to note where all the various pack members are before laying down.

All the Cool Mammals Are Doing It

It should be noted that many – if not most – mammals sleep in a curled-up position. Many people even sleep in a quasi-fetal position (although our spines lack the flexibility to let us truly curl up).

As with dogs, this curled up sleeping position is probably a manifestation of similar evolutionary pressures. All mammals are subject to predation by bigger, scarier animals; all mammals can get cold in very low temperatures; and all mammals descend from den-dwelling ancestors.

If you think about it, it makes more sense to ask why some dogs don’t sleep in a curled position (those weirdos).

Most dogs who like to curl up when they sleep will love a properly sized bolster bed. Made with a cushion that encircles most of the bed, bolster beds give your pet a little extra support along his outer edge. Many dogs even like to sleep with their head or chin propped up on this cushion.

We reviewed six of the best bolster dog beds a little while ago, but if you’d rather skip to the chase, you can’t go wrong with either the Omlet Memory Foam Bolster Bed or the Pet Fusion Lounge Bed.

The Omlet Memory Foam Bolster Bed is a premium, elevated bolster bed that you can actually customize to suit your canine’s needs (and your color and style preferences).

While the Omlet Bolster Bed is likely the best option in the entire bolster-bed category, but it is a bit pricey and the Pet Fusion Lounge Bed is another great option.

It features a 4-inch-thick memory foam base and polyester and cotton twill support cushions, as well as removable, machine-washable covers and an anti-skid base.

Does your little cuttie crawl into a curly-cue when taking a nap? Is it a consistent pattern, or does she change it up from time to time? We’d love to hear all about it in the comments below, and be sure to share your sleeping-dog photos with us on Twitter. 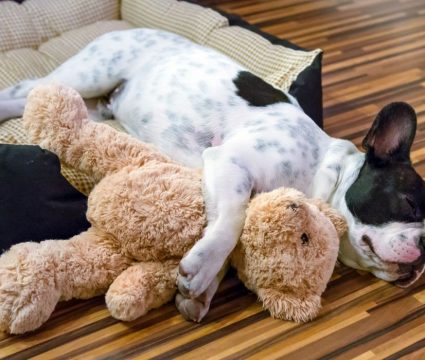 Guide to Dog Sleeping Positions (And What They Mean)