Apoquel for Dogs: A Potential Solution for Your Dog’s Itchy Skin 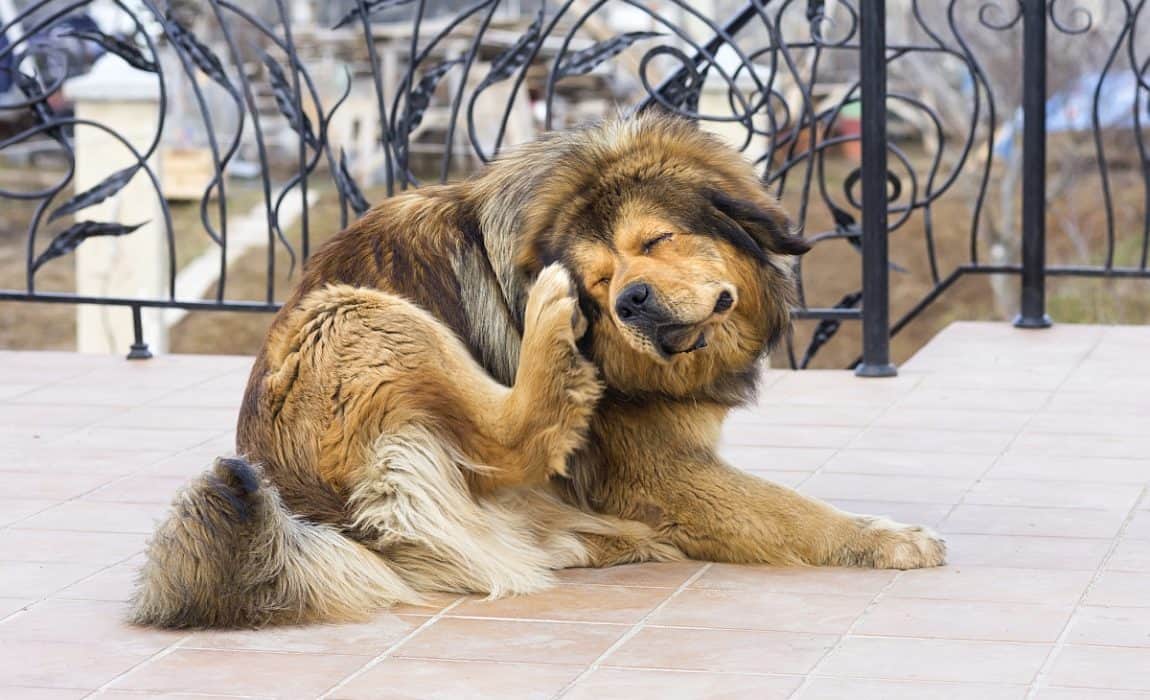 Itchy skin – a condition veterinarians call pruritus – is one of the most common ailments from which dogs suffer, and it is often tricky to treat.

Vets have used a variety of different medications to help give dogs relief over the years, with varying levels of success. However, a fairly new drug appears to offer these itchy dogs some hope – specifically, Apoquel.

Why Do Dogs Itch?

Before discussing the new medication, let’s take a step back and discuss the itchy skin problem. Pruritus can occur for a variety of different reasons and in some cases, the condition can progress enough to make dogs miserable.

Some of the most common causes of itchy skin in a dog that won’t stop itching include the following:

Environmental allergies occur when your dog’s immune system overreacts to things in the environment, such as pollen, smoke, dander, or dust. Exposure to the allergic trigger initiates an inflammatory response in your dog’s body, which causes intense itching.

Atopic dermatitis is very similar to hay fever and other environmental allergies some people experience – it just manifests differently. Instead of suffering from sneezing and watering eyes, your dog will just get really itchy.

Ideally, you’d treat atopic dermatitis by simply preventing your dog from coming into contact with the trigger. However, it isn’t always easy to identify the problematic substance, and even if you do, it can be very difficult to shield your pooch from ubiquitous things like tree or grass pollen. Accordingly, medications are often required to treat the condition.

Flea bites are a little itchy, but some dogs suffer from a condition known as flea allergy dermatitis, which causes flea bites to go from mildly distressing to maddening.

Aside from eliminating the flea problem with a good preventative medication or flea home remedies, it is often necessary to prescribe medications for dogs suffering from the condition, to provide them with some relief.

Unlike humans, who may develop hives or have trouble breathing after eating a food to which they are allergic, dogs usually suffer from itchy skin when they eat something that triggers an exaggerated immune response. Some of the most common food allergy triggers for dogs include beef, chicken, lamb, fish and pork.

Food allergies are typically treated through the implementation of an elimination-challenge diet, in which your dog’s diet is manipulated in a way that allows you to identify the offending ingredient, which can then be avoided in the future.

Contact dermatitis is irritation and itchiness that results from the direct physical contact with an allergic trigger. It is pretty similar to atopic dermatitis, except that the causal agent in this case is usually something like a harness, collar, dog bed, or article of clothing.

Identifying the problem is usually relatively easy, as the irritation and itchiness is often confined to a small area.

However, as with other causes of itchiness, contact dermatitis often necessitates the administration of medications to help your dog get past the problem.

Veterinarians have used a variety of different drugs to treat dogs suffering from pruritus – especially atopic dermatitis – over the years.

Some have proven to be relatively helpful, while others fail to achieve the desired effect. Still others often cause unpleasant side effects, which may be worse than the itchiness.

A few of of the most common medications vets have used in the past include:

Hydrocortisone sprays are sometimes used to treat itching in dogs. Often available over-the-counter, these sprays may provide rapid relief for four-footers. And because these medications are only absorbed in small amounts by the dermis, they typically don’t cause as many side effects as some oral itch-fighting medications.

However, these medications are not intended for exceptionally long-term use, and owners are instructed to seek veterinary assistance if the itching does not subside in seven days.

An immune-suppressing drug often prescribed for human patients slated for organ transplant surgery, cyclosporine helps put the brakes on your dog’s immune response. This prevents the dog’s body from overreacting to the allergen. Cyclosporine is FDA approved for the treatment of atopic dermatitis in dogs weighing more than 4 pounds.

Cyclosporine occasionally causes a few side effects, including:

Prednisone is a synthetic corticosteroid, which is quite like cortisol – the primary corticosteroid produced by your dog’s body. As with cortisol, prednisone helps to stop the dog’s inflammatory response, which often helps to put an end to atopic dermatitis.

Some of the most common side effects that are caused by prednisone include:

Additionally, dogs who must take prednisone for extended periods of time may develop diabetes, kidney disease or Cushing’s disease.

Like prednisone, dexamethasone is a corticosteroid that helps to reduce inflammation. It has an extremely broad range of action and targets all bodily systems, so it is used for treating a variety of inflammatory and auto-immune diseases in dogs.

Some of the side effects of dexamethasone include:

Antihistamines, such as Benadryl, Chlorpheniramine, and Zyrtec, are additional options for dogs suffering from itchy skin. These types of medications work by preventing chemicals called histamines from binding with the cells in your dog’s body.

There are a number of different antihistamines vets can prescribe, and a fair bit of trial-and-error is often required to find one that works for your dog.

Most antihistamines are relatively safe and well-tolerated by most pups, although large dogs sometimes require high amounts of the medication, which can increase the cost of treatment significantly.

The most common side effects associated with antihistamines include:

Apoquel: A New Medication for an Old Problem

While cyclosporine, prednisone and a few other medications do help a lot of dogs, they don’t always work and they often cause a number of unpleasant side effects.

Since its approval, Apoquel has been used to treat thousands of cases of atopic dermatitis and similar allergies. Many dogs appear to respond well to the medication, and it has largely been well-received by vets and their patients.

How Does Apoquel Work?

In other words, when your dog is exposed to an allergen, the body’s cells release Janus kinase, which leads to inflammation and itchiness.

Vets refer to Apoquel as a JAK inhibitor, because it stops your dog’s body from releasing the JAK enzyme. Without this enzyme pumping through your dog’s body, he won’t become itchy after encountering an allergen.

However, JAK inhibitors dampen your dog’s immune response, so dogs taking the medication require longer to heal from injuries and are at increased risk of developing infections and other health problems.

Apoquel comes in tablet form, each of which contains either 3.6 or 5.4 milligrams of medication.

Your vet will instruct you on the proper dosage for your pup, but 0.4 to 0.6 milligrams per kilogram (0.18 to 0.27 milligrams per pound) of body weight is the standard dosage. Apoquel is usually administered every 12 hours (twice daily) for the first week or two of treatment, after which dogs are only given the drug once every 24 hours.

Apoquel works quickly, and if it is going to help treat your dog (it doesn’t always work), it will usually do so within the first week or so of treatment. However, some dogs enjoy almost complete relief in a day or two.

Apoquel Side Effects For Dogs

Unlike many of the other medications that are used to treat atopic dermatitis and similar conditions, Apoquel does not typically produce many side effects.

This, along with the drug’s efficacy, is part of the reason that the drug has been so well-received by vets and their clients.

For example, gastrointestinal upset, which frequently occurs when dogs are administered corticosteroids, is very rare for dogs administered Apoquel. But no medication is perfect, and a few side effects have been noted among dogs taking Apoquel.

Ear, skin and urinary tract infections are some of the most common side effects that occur in dogs taking Apoquel. Some dogs develop subcutaneous lumps and growths while taking the medication, and it can also make them more susceptible to viruses, which can cause them to develop numerous papillomas (warts).

Anorexia, lethargy, increased cholesterol, and a reduction in white blood cells are noted in the product literature, but these seem to be fairly rare in practice.

Skin mites also cause problems for some dogs taking Apoquel.

Weight gain is probably something else to watch out for, given that it is a common side effect for humans who take JAK inhibitors, like Apoquel.

The most concerning side effect from Apoquel is bone marrow suppression. Nevertheless, according to Dr. Melissa Eisenschenk with Pet Dermatology Clinic, this is quite rare and only seen in about 1% of dogs prescribed the drug. This suppression does not produce clinical symptoms; it is only noted when blood is drawn and analyzed.

Bone marrow suppression stops in most cases once the dog stops taking Apoquel, but most veterinarians recommend taking blood samples a few months after starting a dog on the medication.

Contraindications: When Apoquel is A Bad Choice For Your Dog

Not all dogs can safely take Apoquel. For example, it is not safe for dogs under 12 months of age, or pregnant or lactating females.

Thanks to its immune-suppressing effects, it is not appropriate for dogs suffering from serious infections. Also, because Apoquel is known to produce unusual growths, it is not recommended for dogs who’ve previous suffered from cancer.

Apoquel is not FDA approved for use in cats.

The Bottom Line: Dogs and Apoquel

Allergy problems are often difficult to treat, and the treatments that have worked historically don’t always resolve the issue. So, many owners and veterinarians were quite happy to see the release of a new medication for treating these types of conditions.

Although anecdotal, many veterinarians seem to be impressed with the medication. As explained by veterinarian Alice M. Jeromin with DVM360 Magazine:

“I have had many clients call it a “miracle drug” and, in fact, it has been for many of my 500 patients currently receiving it.”

Others, such as veterinarian Christine Zewe, are not as excited about it. As Zewe explains:

“It’s a wonderful medication, but it’s not a magic bullet,” she said, adding that it hasn’t been effective on all dogs she’s treated. “It’s not the golden egg that everyone wants it to be.”

In the end, only your veterinarian can determine if Apoquel is right for your dog. But in many cases, the drug does seem to help when all others have failed.

Do you have a dog who suffers from itchy skin? What have you and your vet done to treat the issue? Has Apoquel proven effective for your pooch? We’d love to hear about your experiences in the comments below! 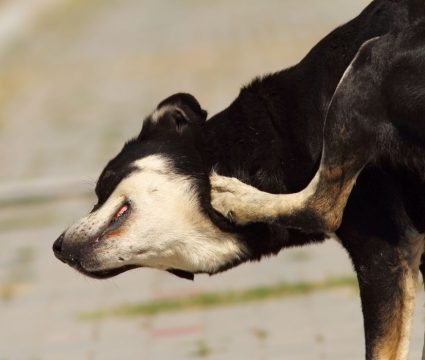 I’m not at all happy because I have not left with any choice ..using apoquel ..but I’m very much worried ..for my baby ..finger cross …it is working on itchiness bt I’m worried abt side effects.