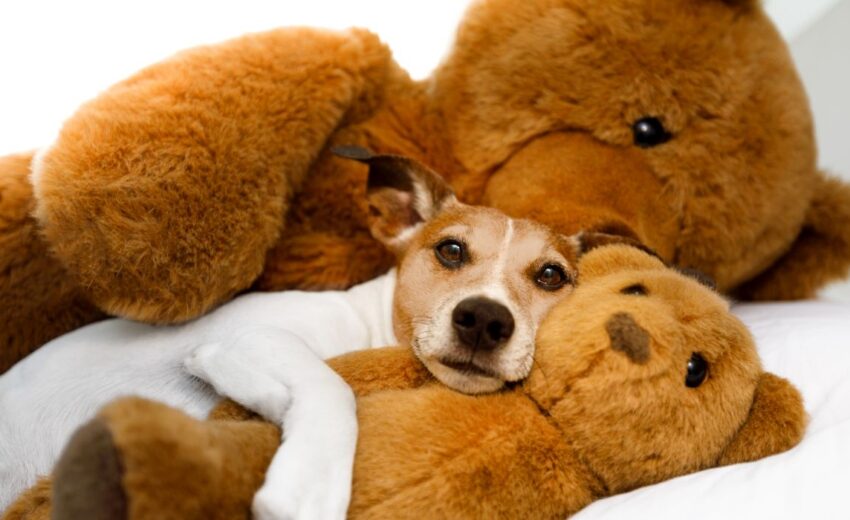 Whether your dog looks like a cute little teddy bear or, you know, an actual BEAR, bear-themed names can be really fun for dogs! We’ll share some of the best dog names that mean bear below so that you can find the perfect namesake for your canine cub.

If your best Buddy has a bear-like personality, one of these names is bound to capture his spirit. Here are some male dog names meaning bear:

Is your sweet girl a real teddy bear at heart? If so, it’s worth taking these female dog names meaning bear into consideration. Check out these bear names for you canine cutie.

Whether your furry friend who needs a name is a boy or a girl, these names are perfect for canine cubs. Here are are some unisex names meaning bear.

Want to name your dog after someone famous? Here are some famous bears that may become your best buddy’s namesake.

These names don’t necessarily mean bear, but they certainly inspire a similar sentiment. Here are some bear-inspired and bear-related terms that can make amazing names for your fur babies.

* Yes, we know that koalas are actually marsupials, not bears, despite their name. But your dog won’t know or care.

Are you looking to welcome a bear-like best buddy into your family? Here are the cub-like canines that may fit the bill.

Hopefully, this list made it easier to find the perfect name for your canine cub. Enjoy spending time with your furry friend?

Which dog name meaning bear was your favorite? How does your best buddy remind you of a bear? We’d love to hear all about it in the comments below!