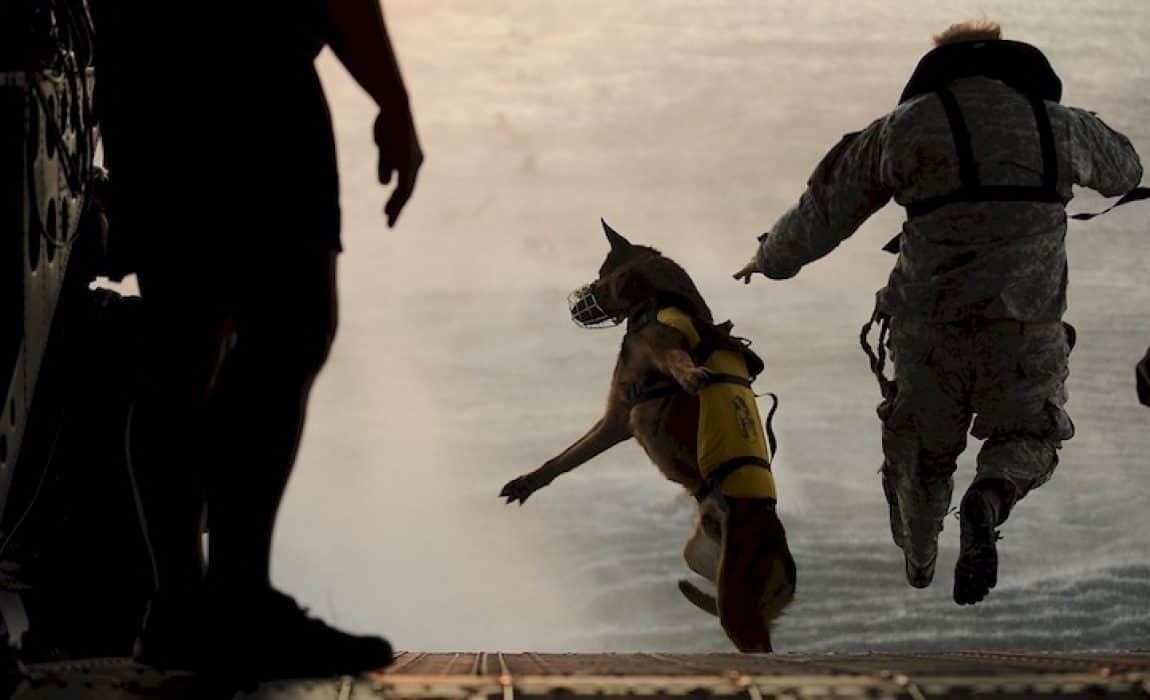 Do you have an honorable furry friend at home? Or perhaps your canine companion is as loyal and tough as they come. Regardless, there are plenty of cases in which pet parents might want to select a military-inspired dog name for their dedicated dogs.

Below, we’ll share some of our favorite military dog names so that you can hopefully find the perfect fit for your trusted fur child.

Most folks know at least a few military code words (more specifically, the NATO phonetic alphabet) – nearly all of us can recite Alpha and Bravo.

But what many civilians don’t know is that some military code words are real names, such as “Oscar” and “Juliet.” Many of these words would make appropriate and fun military names for dogs!

Our canine companions are certainly weapons of uncontained cuteness and companionship. Here are some dog names inspired by weapons that are perfectly fitting for tough furry friends.

If you love patriotic dog names or famous monikers, consider naming your dog after one of these famous dogs from military history! Or, check out our extended list of famous dog names for more ideas.

Chesty is the official mascot of the Marines! He’s the latest in a long and proud history of Bulldogs who are enlisted in the US Marine Corps.

While the exact Chesty changes over the years, most end up attaining the rank of corporal (you go dog)! Bulldogs became the Marines mascot after – according to legend –  defeated Germans compared their conquerors to “devil dogs.”

Chips is a real war hero who served during World War II and became the most decorated dog during the war. He served as a tank guard, alerting soldiers to ambushes.

He dodged gunfire to run phone cables and – in an especially incredible moment – launched himself at a pillbox (shooting bunker) as his handler took cover from fire. Moments later the Italian soldiers surrendered, bitten and bruised.

The German Shepherd mix was donated in 1945 to the U.S. Military by this then owner, upon hearing that the military was looking for dogs to help out. Chips even has a movie about him – Disney’s 1990 “Chips The War Dog.”

Chips was initially awarded the Silver Star and Purple Heart, but the awards were later revoked when the Commander of the Order of the Purple Heart took offense.

Gander is a Newfoundland dog who served in the Canadian Army in 1941. Originally a pet by the name of Pal, he was given to the Canadian Army and saved several soldiers’ lives during the Battle of Hong Kong in World War II when he took a live grenade and carried it back to the enemy.

Gunner was a Kelpie dog who served the U.S. military in World War II. With an incredible sense of hearing, he would warn soldiers of approaching Japanese aircrafts, alerting them before the sirens and giving enough time for them to prepare for battle.

His hearing was so acute that he could detect and alert soldiers to enemy aircraft 20 minutes before the planes would appear on the radar. He was also able to distinguish between Allied and enemy aircraft, only whining when enemy planes came near!

Judy was an English Pointer who served with the Royal Navy and was awarded the Dickin Medal in 1946. She was captured alongside her comrades by the Japanese and became the only animal to be officially declared a Japanese prisoner of war.

As a canine POW, Judy raised the prisoners’ spirits and even intervened with biting and snarling if captors attempted to beat the soldiers. Her handler Williams credits Judy with giving him a reason to live as a POW, as he worried what would happen to her without him.

Lava was a mixed breed dog who was rescued from Iraq in 2005. He was adopted by the 1st Battalion 3rd Marines Unit – which was nicknamed the Lava Dogs (surprise surprise).

Lex is a military dog who worked alongside his handler Lee in Iraq. In 2007, they were attacked, with Lee being mortally wounded and Lex being severely wounded. Despite his own injuries, Lex wouldn’t leave his handler’s side and had to be dragged away for medics to attempt treatment for Lee.

Lex became the first actively working U.S. Military Dog to be granted early retirement. He was adopted by his handler Lee’s parents, and still has pieces of shrapnel in his back that could not be removed due to potentially damaging his spine. Like the idea of naming your dog for beating the odds? Check out our full list of dog names that mean “survivor”.

Rags is a famous Cairn Terrier who was adopted into the U.S. 1st Infantry Division in 1918. He served during World War I in Paris, running messages back from the front lines.

During the Meuse-Argonne Campaign, Rags ran a vital message back while bombs dropped all around. Despite being gassed and partially blinded, he got his message through and survived.

Rip was a terrier-mix who was found by an Air Raid Warden in London and went on to become the service’s first search and rescue dog during World War II. He is said to have saved over 100 people, earning him the Dickin Medal in 1945.

This famous German Shepherd dog was adopted from a World War I battlefield. When he returned home, he went on to star in several films, which he is now famous for! If you like Rin Tin Tin’s story, be sure to also check out our dog names that mean “second chance”.

Stubby is an American Pit Bull Terrier, and is the most decorated American war dog in U.S. Military history! Stubby served during WWI, saving his regiment from surprise mustard attacks and locating the wounded. He is the only dog to be nominated for rank and then promoted to sergeant through combat. Stubby eventually became the mascot for Georgetown University.

Sarbi is an Australian special forces explosives detection dog who spent 14 months missing in action in Afghanistan. Sarbi was discovered by an American soldier and eventually was sent back home to Australia.

Smoky is a Yorkshire Terrier who served with the 5th Air Force in the Pacific during World War II. She was credited with 12 combat missions and awarded eight battle stars, despite only weight 4 pounds! Talk about one of the mightiest dogs in warfare.

If you have a speedy sweetheart, a military transportation vehicle might make a perfect namesake. Be sure to consider naming your pooch after these military models that have all earned their own special nicknames.

The U.S. Navy has had many named vessels in its fleet history, from destroyers to mega-sized aircraft carriers.

Another fun idea is to name your dog after a military base. It’s not uncommon for service members to name their canines after a base they were stationed at – or the base they were at when they adopting the dog.

Check out these real-life military leaders for some namespiration. There are some epic military dog names in their wake.

Still looking for the perfect military dog name for your pooch? Consider some of these additional ideas! Many of these make great police dog names and guard dog names.

We hope you found a great military dog name for your pooch above! Did you settle on one of the ones listed? Does your doggo have a military-inspired name we didn’t list? 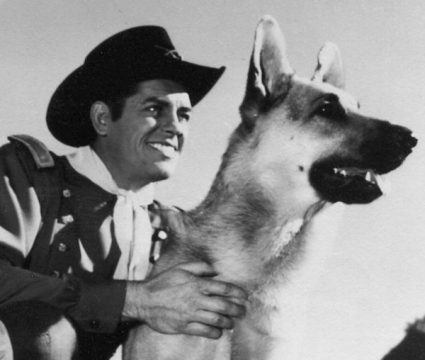 Our first born Lab was named Top. My husband was a Major who needed a First Sargent to help keep him on his toes!! We also have LT and Huey.

Great names, Mary! Thanks for sharing.

I named my police K9 Currahee, which is Cherokee for stands alone. Which is the mountain in Toccoa Georgia, where the 101st stood up for airborne school. Also the name of the 506th parachute infantry Regiment.

You guy don’t have the name sniper

They are right he was a pitbull